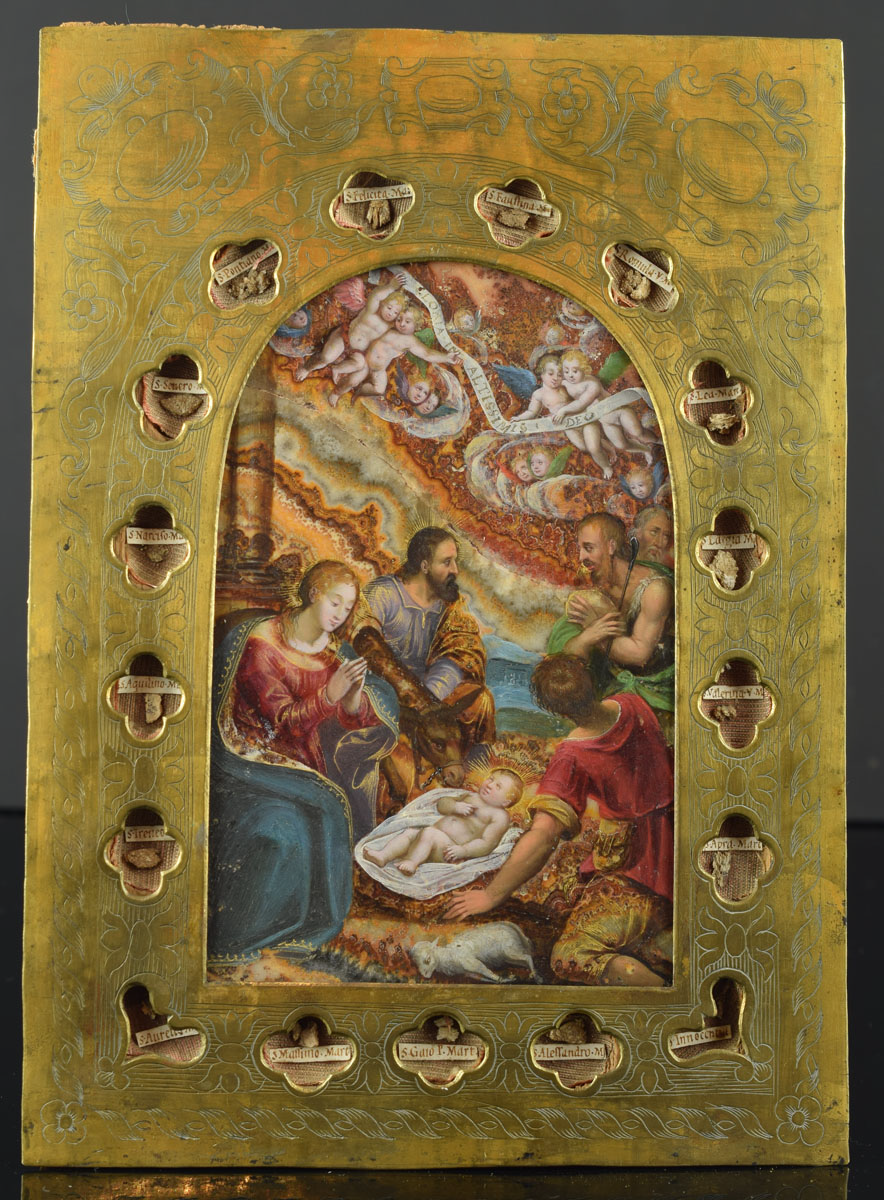 This Adoration of the Shepherds is painted on stone, specifically agate. Artists in Italy, especially in the 16th and 17th centuries, as well as a few Northern artists are known to have painted on this rather unusual support. While earlier artists mainly used stone for its assumed durability, beginning in the late 16th century, artists more frequently painted on colorful stones, often with striking patterns, and incorporated the natural appearance of the stone into their compositions in often highly creative ways. Here, the brown cushion the Child rests on, the neck of the donkey, the inside of Mary’s blue mantle, the pants of the shepherd in the foreground, and much of the sky among other areas are in fact unpainted and the plain stone is used by the artist to mimic different materials and textures. An especially intriguing instance of the play between the painted and unpainted is the column to the left. Here, the artist leaves the stone largely unpainted and only suggests the column’s three dimensionality and its base through shading. The column is actually stone, not paint imitating stone. Interestingly, the painting is surrounded by a gilt metal frame with recesses for relics, each accompanied by a saint’s name written on a small piece of paper or parchment, thus underlining the devotional purpose of this object.

This work has been acquired in memory of the life and work of Jeannine O’Grody, former Curator of European Art, Chief Curator, and Deputy Director at the Birmingham Museum of Art. Knowing her love for scholarship, her interest in the Italian Renaissance, artist’s materials as well as artistic processes, she would have found this work fascinating and would have been proud to have it in the collection that she cared so passionately about. The acquisition was made possible through the generous support of her family and many friends.

The Museum recently added Adoration of the Shepherds, a painting by Bartholomeus Breenbergh, dated 1643, to its collection of European art. Breenbergh spent his formative years in Italy, where he belonged to a group of Dutch and German expats called the Schildersbent (“painters’ clique”). There he focused on painting landscapes, which often included religious or mythological figures bathed in the warm southern light. He returned to the Netherlands in the early 1630s to live in Amsterdam and continued to work in the same vein, which became the mainstay of his art. Adoration of the Shepherds, however, is a rare exception. In this painting, though the landscape is relegated to a minor role in the background, the extraordinary handling of light in this painting is a testament to the skill he acquired in Italy. The scene in the foreground is illuminated by a divine light radiating from the Christ Child. It variously highlights the figures, first and foremost Mary on the left, but also the three shepherds on the right, whose reactions range from ignorance to delight to devotion. In the background, an angel is descending through a ray of light falling through the clouds to announce the birth of Christ to a group of shepherds tending their sheep. The small painting has survived miraculously well in the more than 350 years since it was painted, and the attentive observer can still see nearly every careful brushstroke.