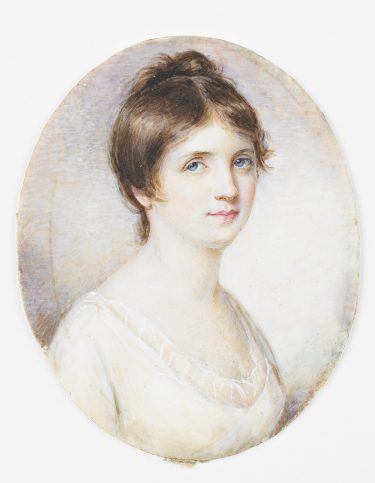 In early February, Philadelphia miniatures expert and dealer Elle Shushan, a contributor to the catalogue for the popular exhibition The Look of Love, visited the BMA. Curator of American Art Graham Boettcher invited Shushan into collection storage to examine the Museum’s small and little-studied collection of American portrait miniatures. Opening the drawer of a storage cabinet, a portrait of a woman in early-19th-century attire caught Shushan’s eye. Although the piece was housed in a damaged 20th-century frame beneath a badly yellowed plastic cover, Shushan immediately recognized it to be the work of Edward Malbone (1777-1807), the foremost American miniaturist of the late-18th and early-19th centuries. An old typewritten label affixed to the back of the frame supported Shushan’s attribution and identified the sitter as Mary Hooper Shaw Fleming of North Carolina.

How did this important miniature enter the Museum’s permanent collection and how had it escaped notice for nearly 60 years? Research conducted by Associate Registrar Mary Villadsen revealed that the miniature was given to the Museum in 1955 by Mrs. Valentine J. Nesbit, in memory of Birmingham miniaturist Caroline Couper Stiles Lovell (1862-1947). According to correspondence with the Museum, the miniature was a gift from Lovell to Mrs. Nesbit’s mother. Nesbit mistakenly believed it to be Lovell’s work. Although the miniature was accepted by the Museum’s Acquisition Committee on December 5, 1955, at that time—for reasons unknown—it was not considered part of the permanent collection, and therefore never assigned an acquisition number.

Additional research by Boettcher revealed that Lovell was a lateral descendant of Malbone, and that her family’s estate in Cartersville, Georgia, was named Malbone in his honor. Lovell possessed a number of Malbone’s original miniatures, one of which she lent to an exhibition of his work at the National Gallery of Art in 1929. It was also discovered that a nearly identical miniature can be found in the collection of the Yale University Art Gallery.

The sitter Mary Hooper (1779/1780-1831)—later Mrs. James Shaw and Mrs. Alexander Fleming—was the niece of William Hooper (1742-1790), a North Carolina signer of the Declaration of Independence. After an appropriate frame is acquired, the miniature will go on display in the Museum’s Styslinger Gallery of American Art.