A different kind of pandemic has been sweeping the world in waves over centuries: our love for blue and white ceramics.

Originally from the lands that are present-day Iran, cobalt – a silvery, blue-gray metal ore – was traded to China during the 14th century. There, potters ground cobalt into a pigment, which could be painted directly onto the dry, yet pre-fired, white porcelain body. Once fired, the cobalt revealed its deep, rich blue color. The result was a type of ceramic known today as “blue and white.” Considered a valuable and rare luxury good, Chinese blue and white porcelain was exported globally through established trade channels like the Silk Road and maritime routes that connected the East with the West. 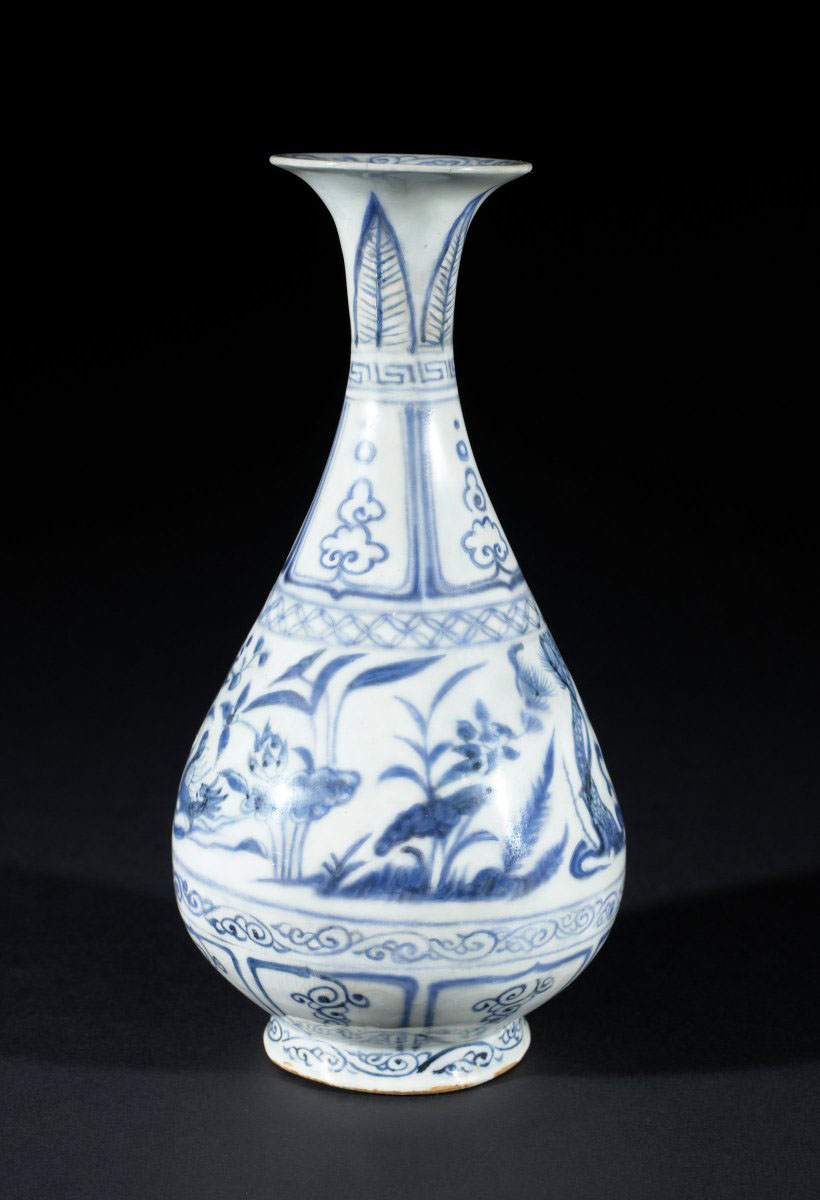 The wide mouth, narrow neck and swollen lower belly of this vase imitates earlier glass and metal forms that were more popular in West Asia than East Asia. Surprisingly, large numbers of vases with this shape were exported from China to other Asian regions during the relatively short-lived Yuan dynasty. The lotus pond and lotus petal decoration around the lower neck, belly and foot of the vase were all intended to signal purity. Early examples of Chinese blue and white porcelain are characterized by visible impurities in the cobalt oxide, which often burned to different shades of blue and gray during firing. 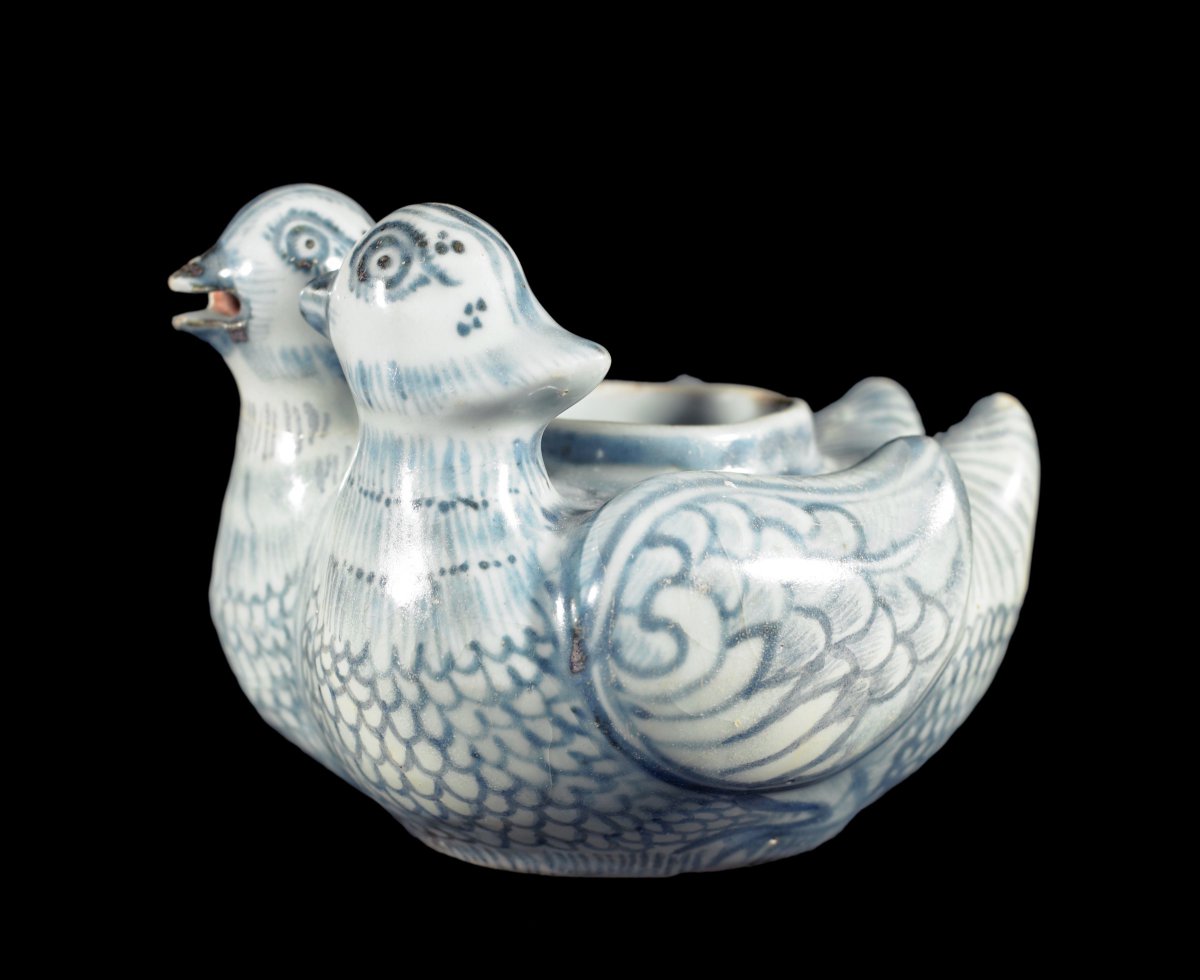 Read More
Though often overshadowed by its much larger northern neighbor, China, Vietnam produced fine blue-and-white wares for both overseas as well as domestic markets as early as the 15th century. This spectacular water dropper, however, was likely made for the wealthy Vietnamese domestic market. Used to wet dry ink in preparation for writing and painting, this water dropper is in the form of a pair of mandarin ducks. Known to mate for life, mandarin ducks represent domestic happiness in Vietnam as elsewhere in East Asia.

During the 16th century, the Portuguese established contact with China, beginning direct trade of blue and white porcelain to Europe. Like later revolutions in plastics, Chinese ceramics – which were more durable and had a slicker surface than European ceramics – aroused much curiosity when they began to reach the West. Initially, white porcelain decorated with blue cobalt oxide was the only type of Chinese porcelain known in Europe. Later, Dutch traders cornered the market importing expensive, more colorful Asian porcelains from Japan as well as China. Because of their popularity (including high prices paid for them), European potters sought to copy them using local materials and techniques. In Europe, the Dutch were the first to produce blue and white wares during the 17th century. 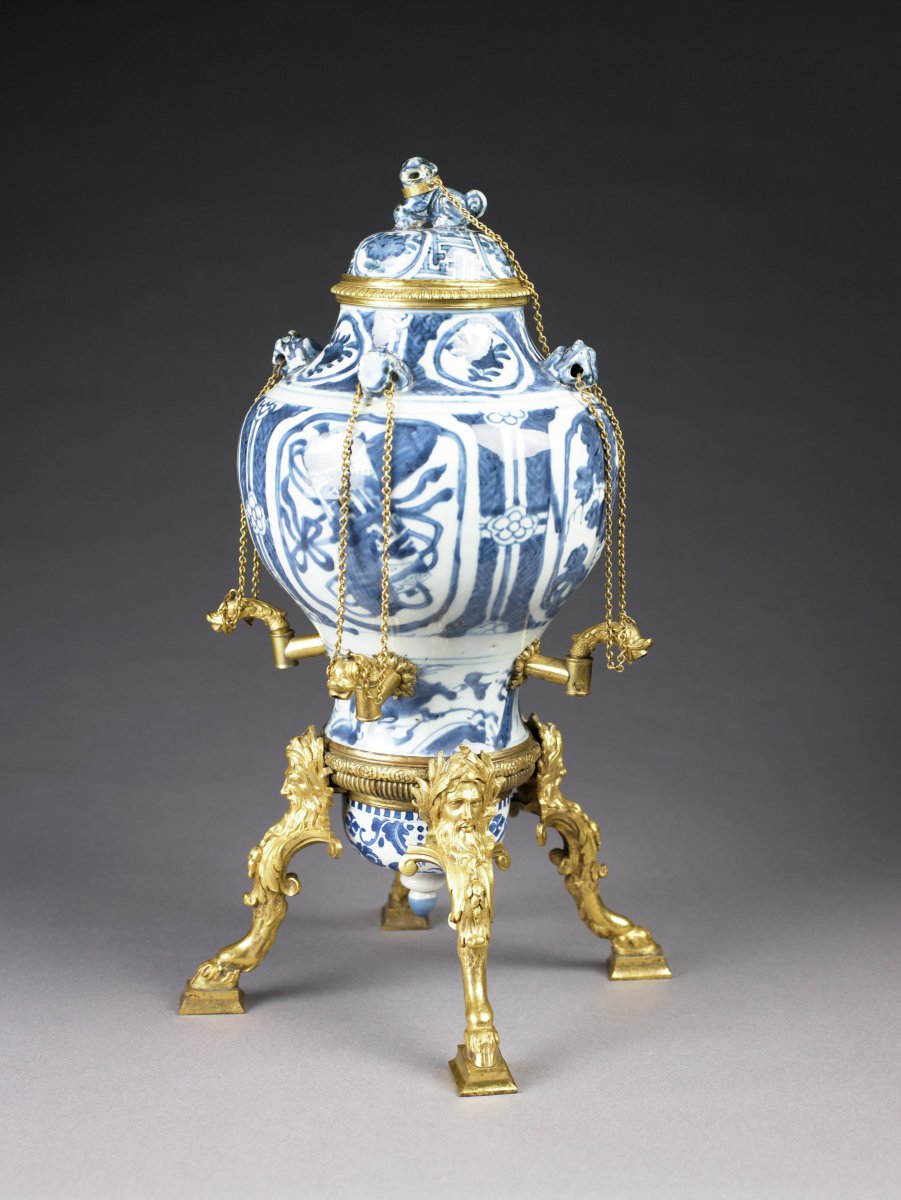 Read More
Porcelain imported into Europe often broke in transit. This perfume fountain is made up of parts salvaged from three separate, damaged pieces of 17th-century Chinese blue and white porcelain. Specialty French makers fashioned a series of baroque gilt-bronze mounts to create new hybrid forms. While in China the motifs would be understood as Buddhist, such as lotuses (representing purity), umbrellas (signifying high rank), and peonies (representing riches), in Europe these were seen simply as exotic patterns. The perfume fountain was designed to dispense through its spigots small amounts of fragrant water that could be used by women to freshen up or to sweeten a room’s odor. 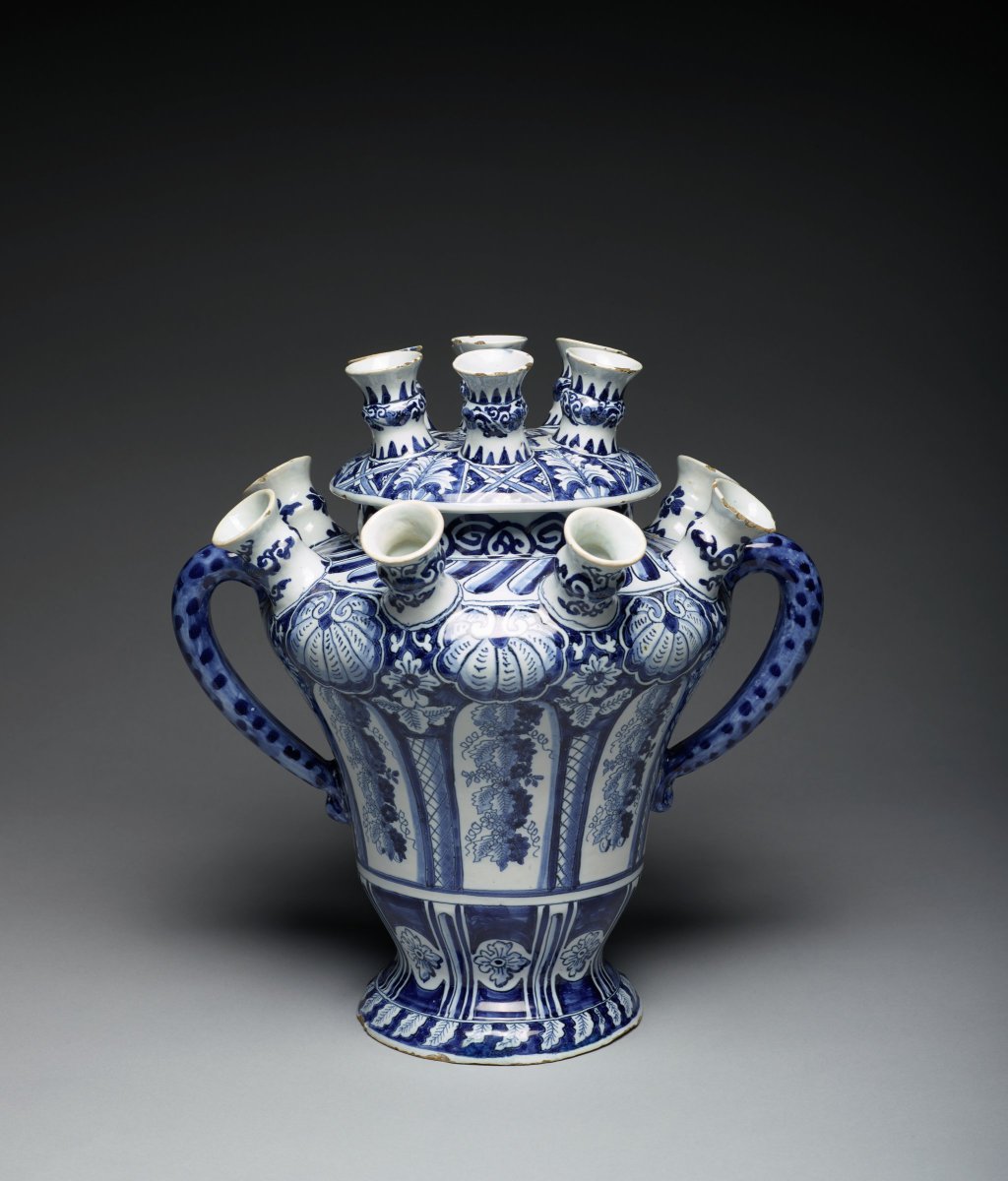 Read More
Tulips were introduced to Europe from Turkey in the 16th century and ceramic forms were adapted to show them off to their best advantage. Once it became known that tulip bulbs could tolerate the harsher weather conditions of the Low Countries, the tulip grew in popularity. Its saturated colors made it unlike any other plant and it soon became a status symbol and thus a coveted luxury item. Pairing a tulip with a beautiful blue and white vase became proper etiquette among the wealthy during Holland’s Golden Age.

Blue and white ceramics dominated European pottery from the mid-17th century and Chinese decorative motifs were frequently imitated. An increase in imports during the 17th century did nothing to temper demand and the taste for blue and white quickly became a mania. For this reason, European imitations, which at first slavishly copied well-known Chinese types, gradually introduced European shapes and subject matter. 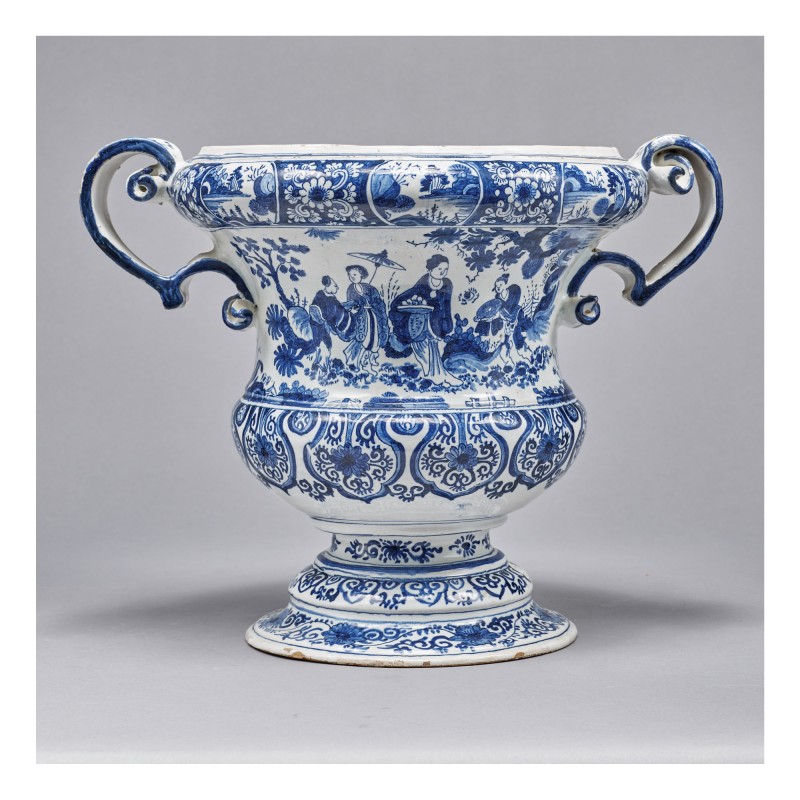 Read More
This large, Baroque, urn-shaped vase is decorated in blue and white with six Chinoiserie landscape vignettes and scenes of figures, illustrating the European fascination with the Far East, although there was little real understanding of Asian art and culture. The Dresden faience factory was started by Johann Friedrich Böttger, who not only discovered the Chinese secret to true porcelain (identifying the correct clay and firing it at high temperatures), but also was instrumental in establishing the Meissen porcelain manufactory. 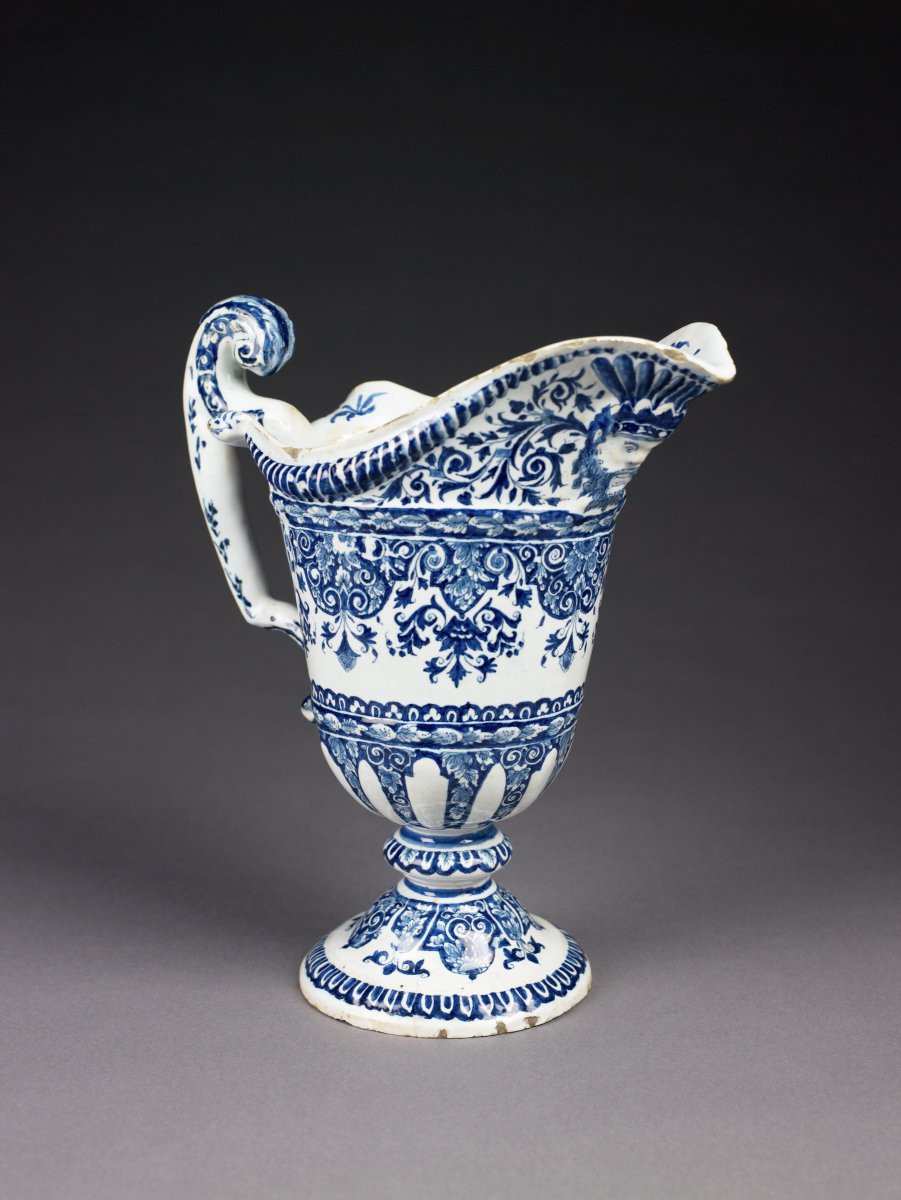 Read More
During the 17th and 18th centuries, Rouen was one of the most important centers for faience production in France. Liberally decorated with lambrequins – fringe-like ornaments – scrolls, and arabesque motifs in blue on a white ground, the ewer illustrates the way in which decorative elements are dispersed and adapted. The helmet shape of the ewer is copied from contemporary French silver vessels, while much of the decoration is derived from Persian designs that were also found in imported textiles. 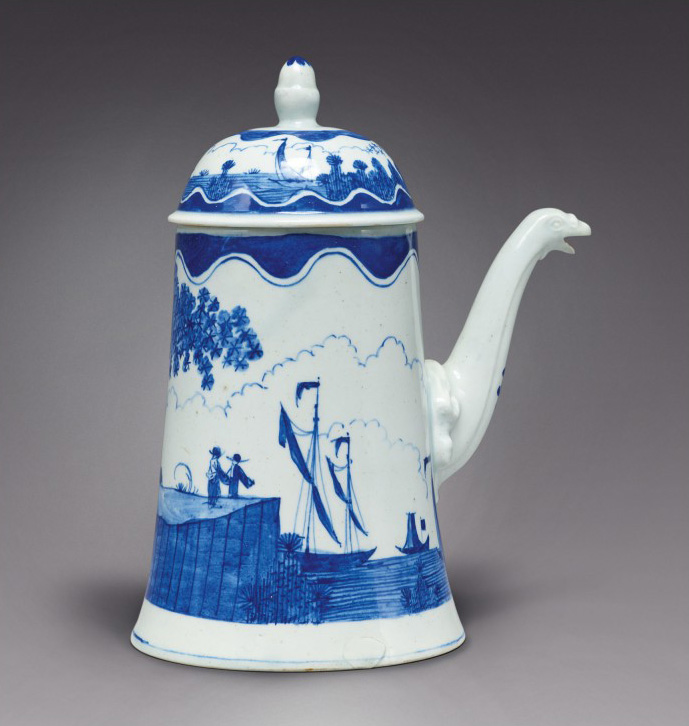 Read More
Hot drinks such as tea, coffee, and hot chocolate (all new foodstuffs introduced to Europe from expanding global trade) proliferated in 18th-century Europe. New ceramic forms were created to celebrate these new, trendy beverages. The shape of this pot was likely derived from phoenix-headed pitchers found in China, while the blue decoration appears to be based on a design by the Dutch Delft painter Frederik van Frijtom, who in turn incorporated Asian motifs into his composition. This design was later imitated by other European potters and was in turn used to decorate Chinese and Japanese Arita porcelains made for the European market. 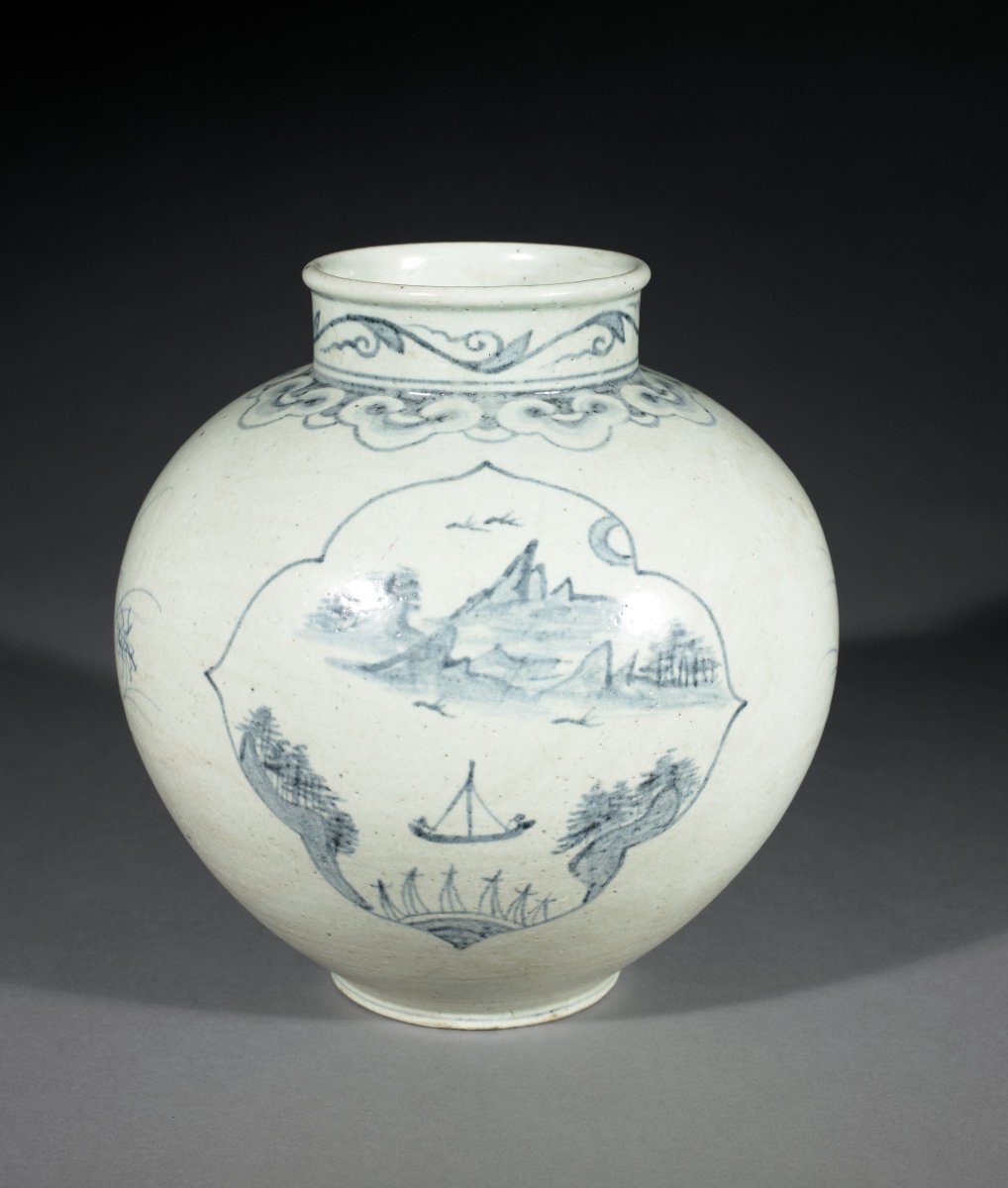 Read More
This distinctive Korean silhouette, named for its globular full moon shape, is formed by making two separate nearly equal halves and delicately joining them at the widest point. A challenging feat with any clay, this is even more difficult with porcelain. The raised neck is painted with a vine motif while wish-granting clouds are painted on the top of the shoulder. Cartouches showcasing two of the eight views of the Xiao and Xiang rivers decorate the sides. As the Mississippi and Colorado rivers are renowned in the United States, the Xiao and Xiang, major tributaries that flow into one of China’s largest lakes, are famed in Chinese art and literature. One panel features “Sailing ship returning home in Xiangyin, north Hunan” 遠浦歸帆 while the other showcases  “Autumn moon-viewing at Dongting lake 洞庭秋月.” Korea’s love of Chinese art and literature parallels America’s passion for European art and literature. 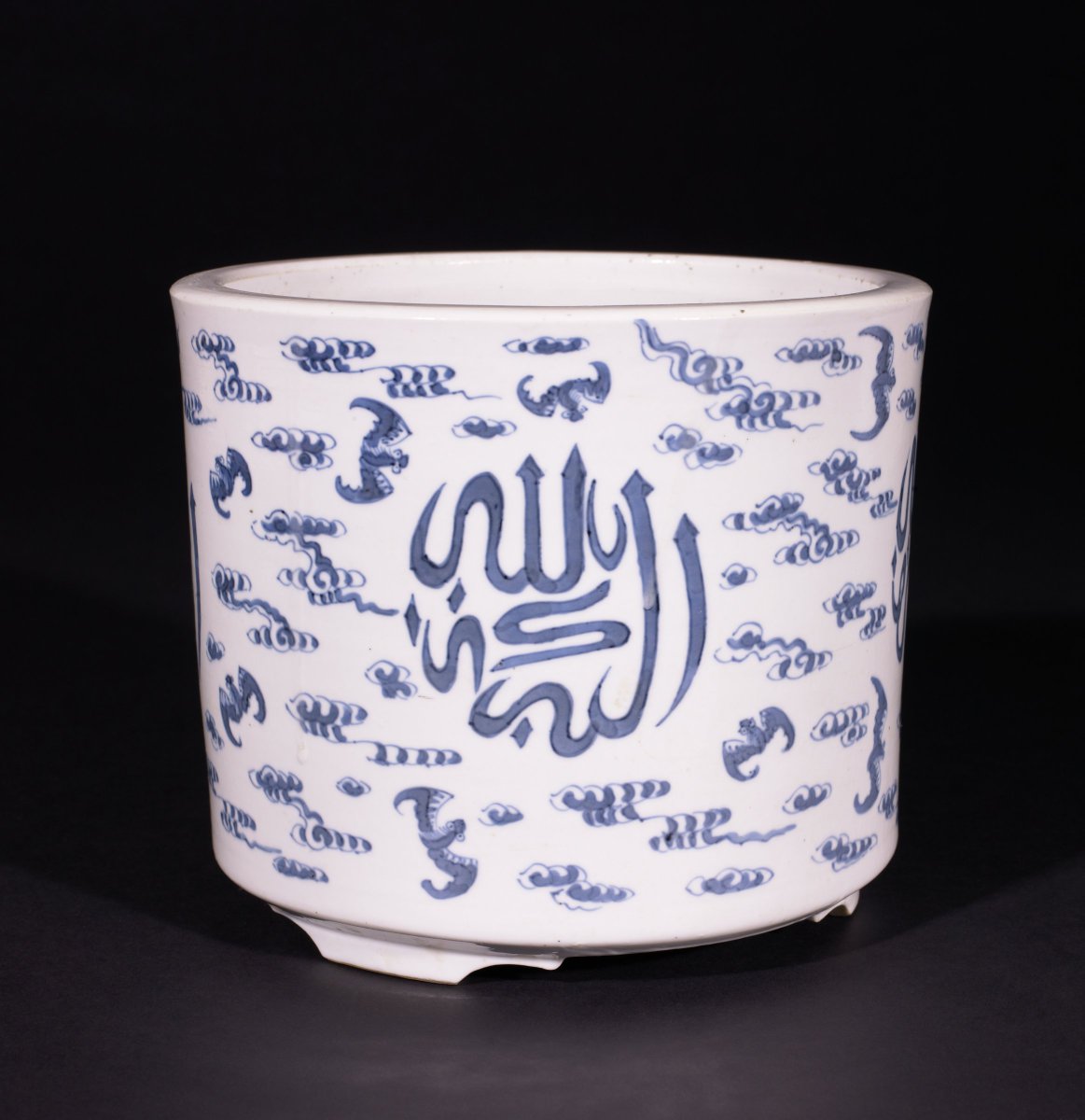 Read More
This vessel most likely once held ink brushes used for traditional writing in China – but it is inscribed in Arabic. Chinese Muslims learned both Arabic and Chinese and wrote both with a stylus (more commonly used for writing in Arabic), as well as with brushes. The decoration of bats flying among clouds is a typical Chinese motif that is a rebus puzzle signifying “May you have good fortune.” Before Europeans brought greater firepower into the Asian oceans, most sea and land trade was dominated by Muslim merchants. Numerous different Muslim populations have lived in China for centuries.

Today, many contemporary ceramic artists look to the past for inspiration and help us find relevancy in historic objects, as well as an understanding of the continuity of the human experience. The enthusiasm for and interest in blue and white ceramics has not waned and continues to be brought to the forefront through both contemporary ceramics and the wider design world. 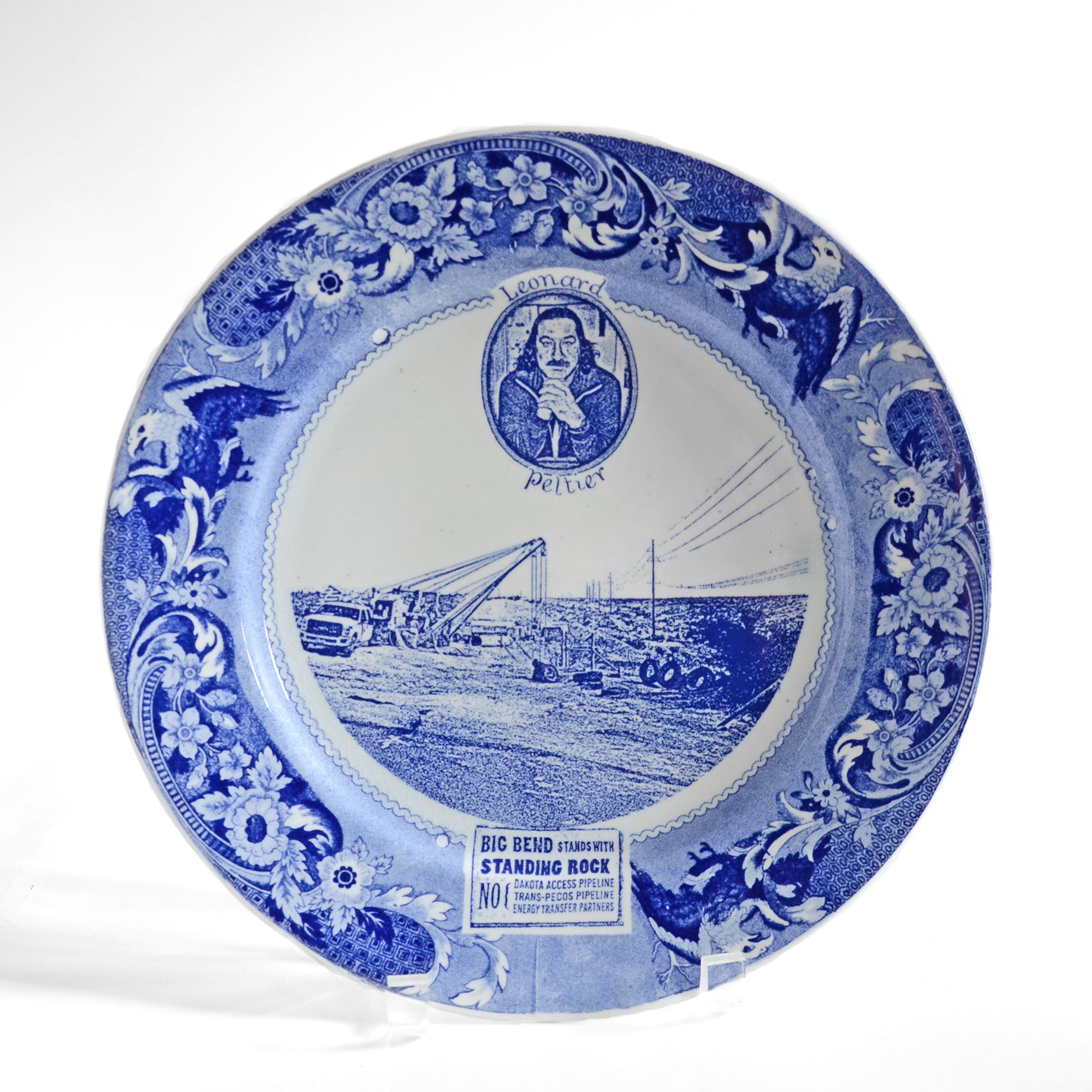 Read More
In the 19th century, printed Staffordshire blue-and-white wares exported to the United States formed part of the new media of the period. Ceramic artist Paul Scott has been investigating these 19th century British wares in combination with the contemporary landscape of the United States. Pipelines and Peltier references Leonard Peltier, an activist in the fight for Native American civil rights. Unjustly convicted of the 1975 murders of two FBI special agents on the Pine Ridge Reservation in South Dakota, Peltier has been in jail for more than 43 years. This work highlights current issues surrounding the contested Dakota Access Pipeline, which threatens Native American ways of life, water, people, and land.