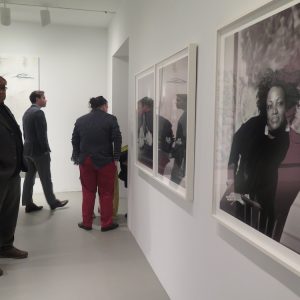 The prestigious 2014 Biennial at the Whitney Museum of American Art kicked off on March 7 in New York, and included two works commissioned by the Birmingham Museum of Art.

Maxine Adams and Amelia Maxwell and Braxton McKinney and Lavone Thomas are diptych portraits by photographer Dawoud Bey. They were created as a part of the Museum’s 2013 exhibition, Dawoud Bey: The Birmingham Project.

The selected works, along with 4 others, were recently acquired for the Museum’s collection by the Collectors Circle for Contemporary Art, the Photography Guild, and the Sankofa Society support groups. Several members of the BMA’s Collectors Circle support group traveled to New York to attend and celebrate the opening alongside Dawoud Bey.

Dawoud Bey: The Birmingham Project commemorates the four young girls and two boys whose lives were lost in the 1963 bombing of Birmingham’s 16th Street Baptist Church. Bey photographed girls, women, boys, and men who represent the ages of the young victims at the time of their deaths, and the ages they would be today.

The Whitney Biennial showcases the work of 103 of the most significant contemporary American artists, and is one of the leading shows in the art world.