The outdoors is a trending topic this summer. The Senate just passed the Great American Outdoors Act—channeling funding to maintenance of national parks—and this June also marked the 156th anniversary of the creation of the national parks system. For months, nature has also been one of few spaces that residents of the United States have continued to flock to for recreation.

Although natural spaces might feel particularly central in this moment, they have been relevant to the lives of Americans and central to the work of American artists since the early 19th century. While many American artists incorporate the natural world into their compositions, only some actually took to the outdoors to source their subject matter. These artist-explorers span the history of American art, however, and each developed their own unique relationship with the outdoors. Step outside with works from just a few of these artists in the BMA’s collection of American art. 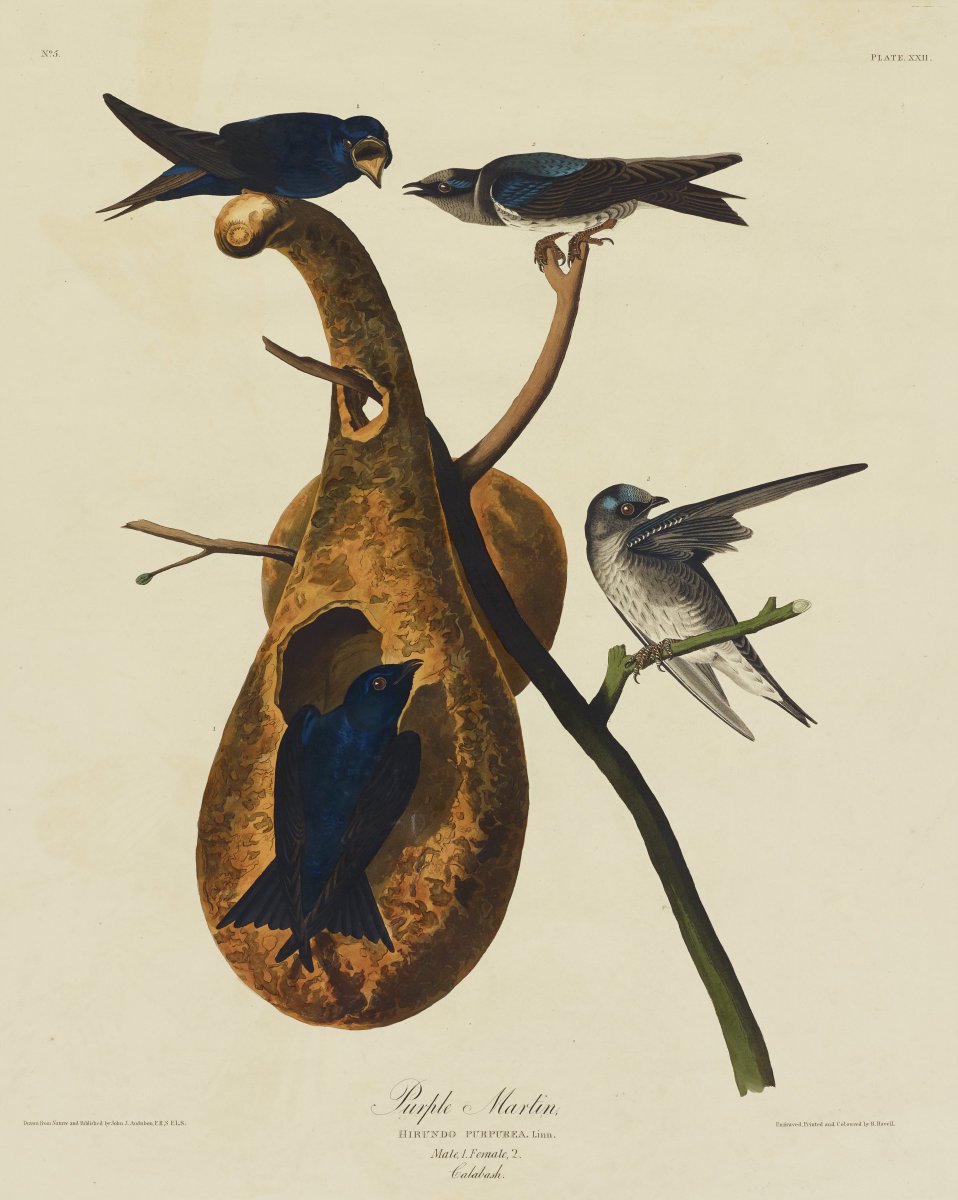 Artist and naturalist John James Audubon said, “To Nature I went, and tried to imitate her.” To record and share information about the birds of North America, Audubon traveled the United States collecting and drawing specimens.

Audubon was a mixed-race French immigrant to the United States who began his studies of nature at his estate in Audubon, Pennsylvania. He initially tracked the flight patterns and nesting spots of birds by bird-banding before beginning to travel extensively and use taxidermy to collect bird specimens. To create an image like his hand colored aquatint Purple Martin (1830)—which shows two male and two female purple martins feeding on a calabash squash—the artist used wires and pins to pose his specimens in life-like positions. From his models Audubon created more than 400 field watercolors that he ultimately sent to London to be printed and distributed.

Finding the inspiration to create outdoor scenes did not always mean traveling. Painters like Edward Mitchell Bannister and John Henry Twachtman found subjects that spurred their creativity close to home.

Bannister lived and painted in Providence, Rhode Island, for over 30 years of his life. He worked outside of his studio to picture New England’s laborers and landscape, sketching outdoors while observing his subjects. In a muted palette of greens, browns, and blues that is seen in Tending the Ground (1886), Bannister created harmonious representations of Rhode Island’s natural world in order to represent a Christian spiritual presence. Unlike many of his peers painting in a similar style in New England in the 1880s and 1890s, Bannister never studied in Europe but instead developed his skill and aesthetic by painting and circulating in the arts community in Boston.

Twachtman painted en plein air (French for “in the open air,” or outside) at his home in Cos Cob, Connecticut. Snow swirls around the viewer in his painting Horseneck Brook, from about 1890. Even with the painting’s title identifying the stream that Twachtman featured in many of his paintings, it is difficult to determine what is sky, air, water, or snow-covered land. Although he did not travel far from home, Twachtman deeply felt his time in nature on his land. He spent time in the landscape and often painted outdoors, capturing his experience in a limited palette of colors and fluid brushwork.

Captions:
Edward Mitchell Bannister (American, born Canada, 1826–1901), Tending the Ground, 1886, oil on canvas, Collection of the Art Fund, Inc. at the Birmingham Museum of Art; Purchase with additional funds given in honor of Norman B. Davis, Jr., AFI.11.2016

A Painter and Mountaineer

If you search the internet for Georgia Engelhard, her name pops up not as a painter but as a mountaineer.

Engelhard completed many first ascents of peaks in the Rocky Mountains and was the first woman to reach the top of many more. She is the namesake of mountains, including Mount Engelhard in the Canadian Rockies.

Her achievements exploring the outdoors came after a first career as a painter. Spurred by the influence of her aunt and uncle, artists Georgia O’Keeffe and Alfred Stieglitz, Engelhard painted in the 1920s. While she abandoned this pursuit when she began scaling mountains, her later interest is foreshadowed in the BMA’s painting Church (about 1930), representing a central, luminous church that appears to sit in a valley surrounded by craggy, towering mountains.

Photographer Ansel Adams visited Yosemite National Park every summer of his life beginning at age 14. He photographed the national park regularly, and his images shaped Americans’ understandings of environmentalism and the American West in the mid-20th century.

The photographer fell in love with Yosemite and explored everything from its dramatic weather patterns (Clearing Winter Storm) to its intimate landscapes (Tuolumne Meadows), and its grand vistas (El Capitan). Adams’ works celebrated this landscape, and his crisp, grand black-and-white shots also were used to preserve the national park. He traveled and worked with the Sierra Club and other conservation organizations, encouraging their use of his photographs to secure funds and political support for environmental protection. Each of these photographs also erased the people who flocked to the park, however, with Adams aiming his lens beyond them to the landscape. Although it was not Adams’ intention, his framing of Yosemite’s landscape reinforced the erasure of the land’s Native American residents that began in the 19th century (including visually through works like the BMA’s Looking Down Yosemite Valley, California by Albert Bierstadt). 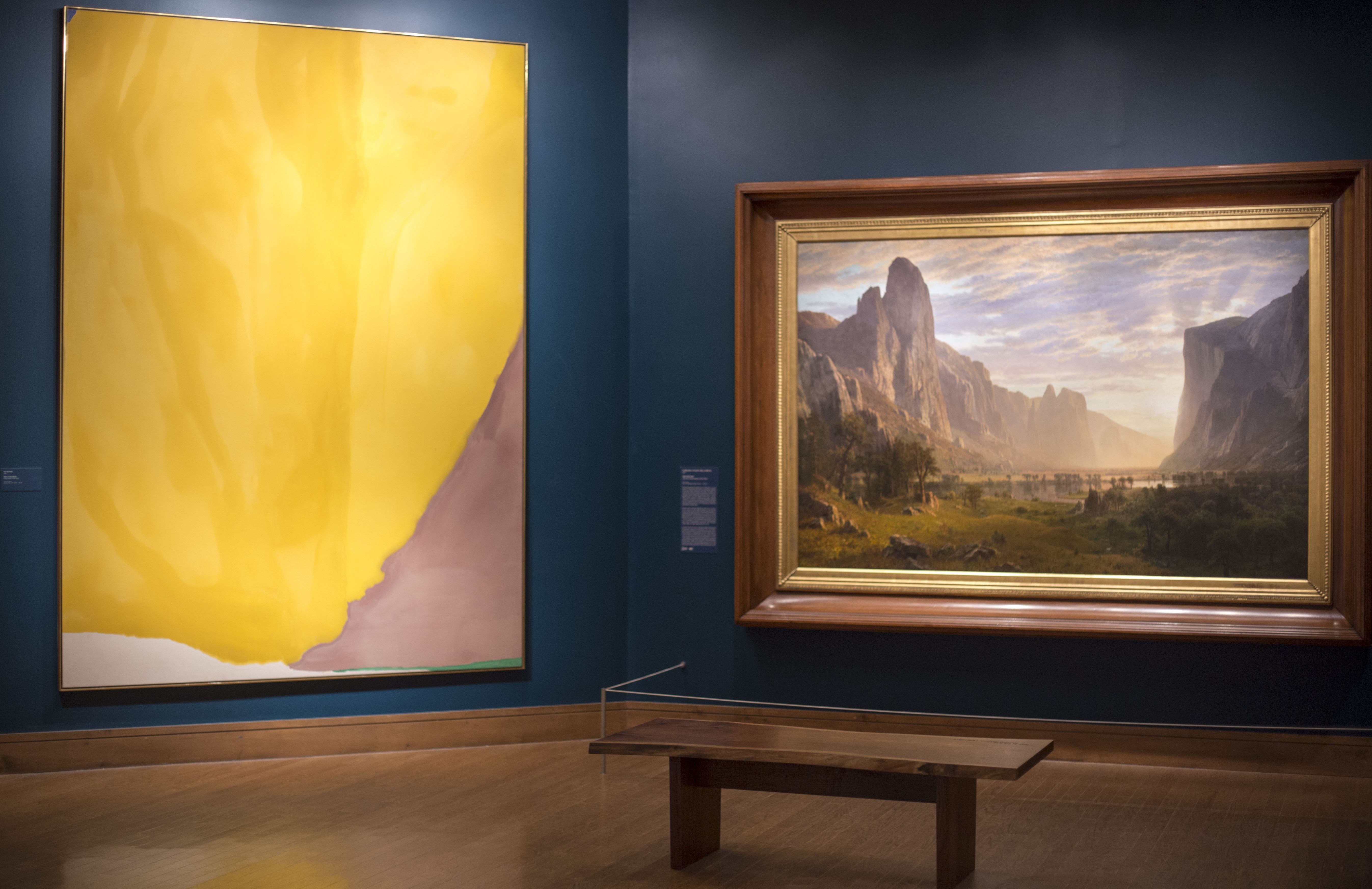 “I wasn’t looking at nature or seascape but at the drawing within nature—just as the sun or moon might be about circles or light and dark.” —Helen Frankenthaler

With the title of Sun Mountain, Helen Frankenthaler’s painting in the Museum’s collection pulls the viewer toward a realist reading. Gazing at its sweeping, stained colors, one might find themselves squinting in the sun. Thin layers of yellow acrylic paint fill the canvas, set off by a sharp purple rise in the lower right corner as well as peripheral slivers of blue, green, and white. Although Frankenthaler reflected her interest in the outdoors in the titles of paintings throughout her career, her canvas is more a meditation on her personal experiences and the pleasure of moving paint.