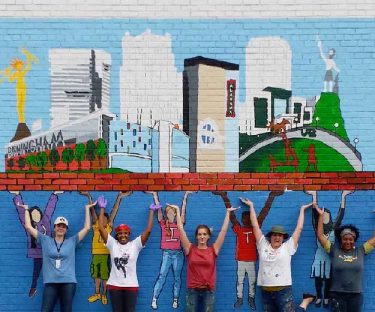 Always looking for ways to make our downtown more vibrant, the Birmingham Museum of Art was recently involved in a mural project at the downtown YWCA. Along with YouthServe and Project Corporate Leadership, the Museum’s Artist-in-Residence Toby Richards coordinated the mural project for the outside of the YWCA’s building, which houses My Sister’s Closet.

The mural, created by local artist and art teacher at Simmons Middle School Carrie McGrann, depicts Birmingham’s skyline held up by children. The message “strong youth, strong city” is painted on the mural, reflecting YouthServe’s mission to promote youth volunteerism and leadership, while giving young people the tools to make positive differences in their communities.

“Downtown Birmingham is changing,” says McGrann. “There’s a new vibe with new businesses, as well as a renewed interest in historic landmarks, such as the renovation of the Lyric. This mural is a symbol of Birmingham as a city, old and new; but, more importantly, it’s an understanding that we need our youth’s support to be strong.” Using her students as models for the mural, McGrann depicts both our community’s diversity and our unique position to work together to make a difference, which she describes as “our united front.”

The mural is yet another example of how the Museum is going beyond our doors to take art to the city. “The Museum strives to be a vital resource to our community, particularly the youth in our city,” says Richards. “Through projects like the mural, we create strong partnerships, increase our visibility, and expand our reach throughout Birmingham.” Be sure to see the mural outside the YWCA when you are nearby!