Unaccustomed to spending so much time within the confines of home, many of us are seeking creative and inspiring ways to invest our time. Technology still rules much of the day, but returning to low-tech activities like baking, gardening, and reading offers a break from increased screen time. We are excited to share this digital exhibition focusing on the joys of reading, visual storytelling, and the written word.

The depiction of books and reading in art is nothing new. Subjects shown with books often intentionally illustrate higher degrees of education, or piety (particularly for religious texts). Such portraits provide a glimpse into the readers’ private lives. In some contexts, images of women reading may be understood as a subversive activity where the reader seeks personal fulfillment and enjoyment outside of her other prescribed roles, holding a means to escape in her hands. Can you relate?

This exhibition not only gathers examples of reading in art, but also steps outside the confines of the written word to show visual storytelling. There are a variety of subjects: an author, a literary character, a Civil Rights quilt, and even a bodhisattva. One work invites the viewer to question beliefs about an American educational institution. We hope you enjoy this offering as we hope that you too are experiencing a return to the written word.

If any of these pieces sparks your lust for learning, please explore the Birmingham Museum of Art Hanson Library’s online catalog to locate books to fuel your research. A bibliography is provided at the end of the exhibition. Please keep an eye on this announcement page to learn when the museum and library are again open to the public.

If you would like to purchase items for your own libraries, we suggest contacting Little Professor in Homewood, Alabama. Little Professor will order and ship titles if they don’t have them in stock. For those of you local to Birmingham, they are currently offering curbside delivery. Thank you for supporting small business.

We are very accustomed to seeing the Bible portrayed in Christian art but what about a book of a different variety?

Saint Benedict is regarded as the father of Western Christian monasticism having authored The Rule of Saint Benedict. It is believed that the book Saint Benedict holds in this painting is a reference to the Rule. Made up of 73 short chapters, the majority of the Rule provides instruction for how to best live a spiritual life to monks living communally under the eye of an abbot. The remaining portion of the text outlines how to properly manage a monastery from an administrative perspective.

Reading magazine beside his trailer home 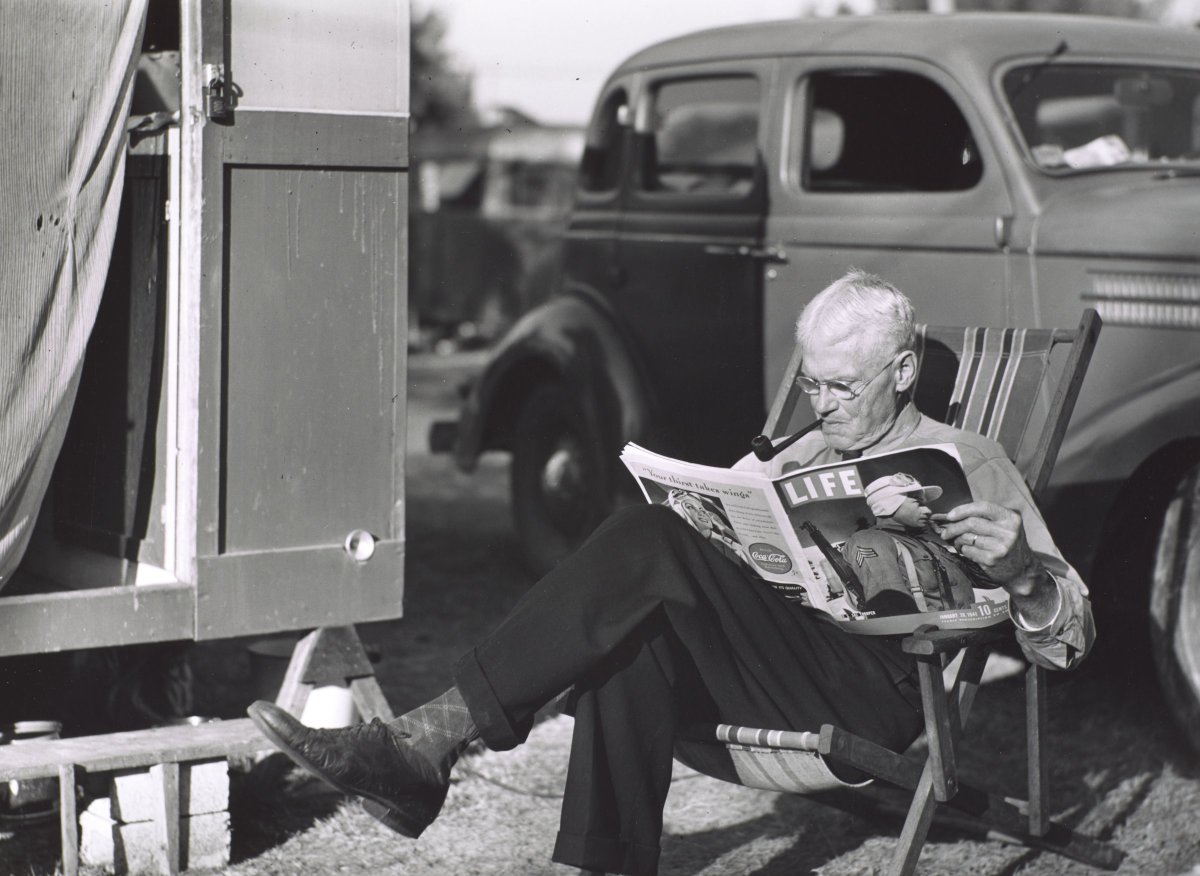 American photographer Marion Post Wolcott is best known for her work with the Farm Security Administration chronicling poverty, scarcity, and impoverishment during the Great Depression. This image of a man comfortably reading Life magazine feels far removed from the world of migrant workers, tenant farmers, and coal miners to whom Wolcott had dedicated much of her time documenting. As a resort community, leisurely activities like reading, playing cards, and enjoying music from a brass band were an accurate representation of life in Sarasota at the time.

The date on this issue of Life is January 20, 1941. Within the next year, the United States will become involved in World War II following the attack on Pearl Harbor. As a result, national spending will increase and the country will be pulled out of the Great Depression, eliminating the need for programs like the Farm Security Administration. 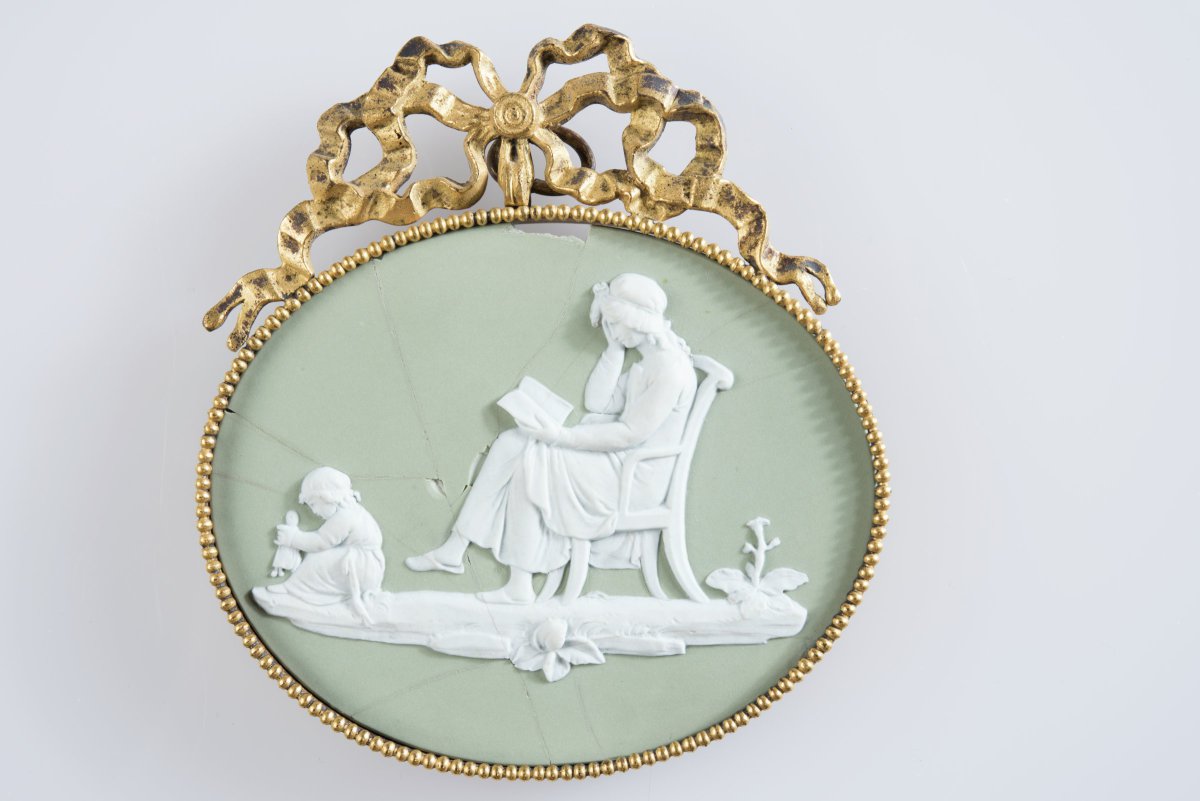 The design on this Wedgwood jasperware plaque was created by Lady Elizabeth Templetown, a freelance amateur artist, whose designs were often used by Wedgwood. Lady Templetown’s specialty was detailed cut-paper work, which Josiah Wedgwood saw as easily translatable to his jasperware with white bas-relief decoration. In this scene, we see a woman reading while watching a child play on the ground in front of her. This scene and others like it, with a dramatically softer subject matter than what Wedgwood traditionally chose, appealed to a much larger audience. Indeed, designs by Lady Templetown and fellow women artists who worked with Wedgwood at the time have been reproduced myriad times since the eighteenth century. 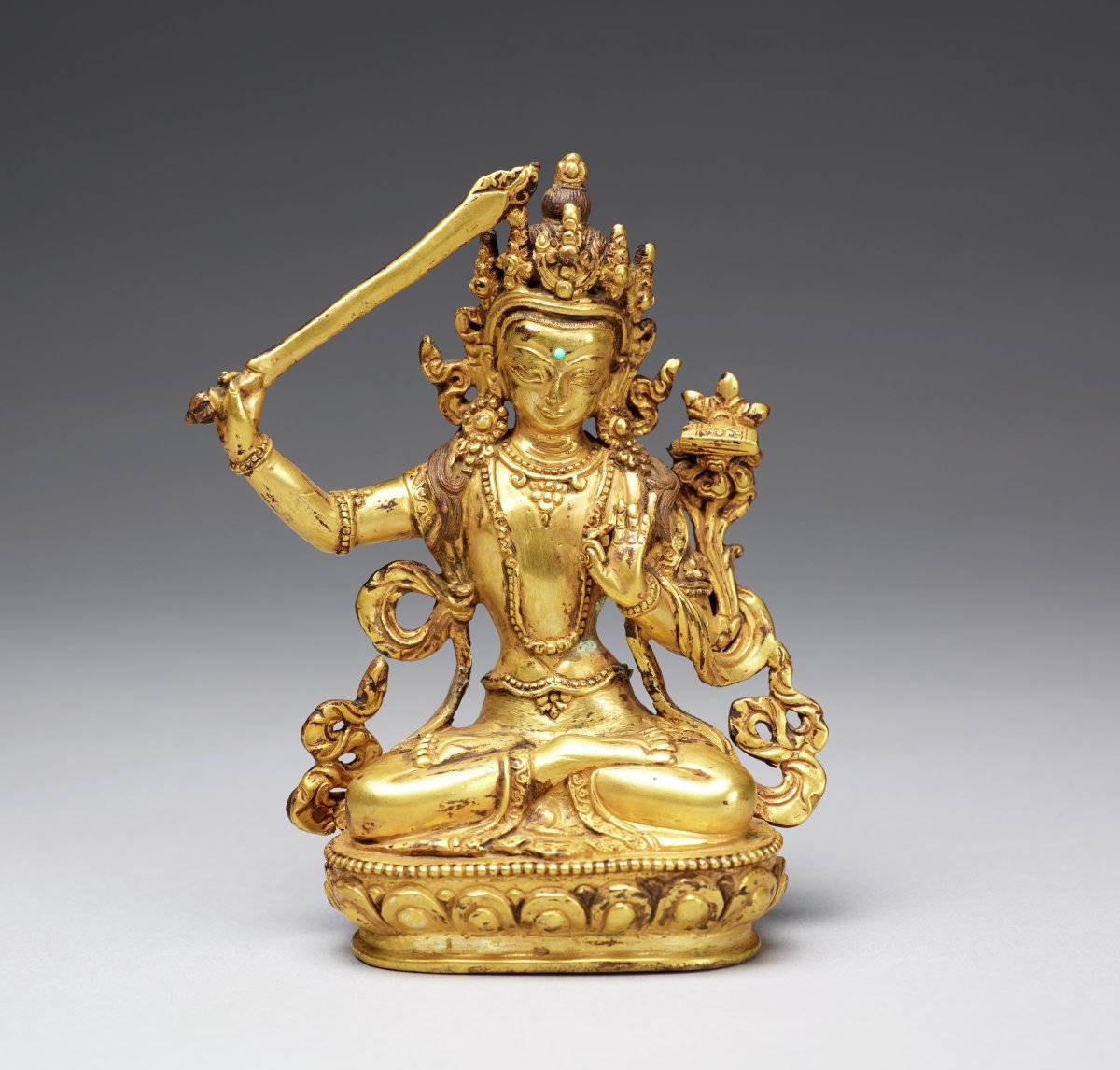 According to Mahayana Buddhist texts popular in Tibet, Nepal, and East Asia, a lotus grew from a jambu-tree and from the flower was born Manjusri, Bodhisattva of Wisdom. As portrayed here, his right hand holds a sword of wisdom, and above his left shoulder grows a lotus upon which sits a book. Devotees understand that Manjusri wields his sword to slice away the clouds of ignorance and provides wisdom with the book at his left shoulder. His followers believe that Manjusri could gain control over every demon and has the power to eliminate deception. 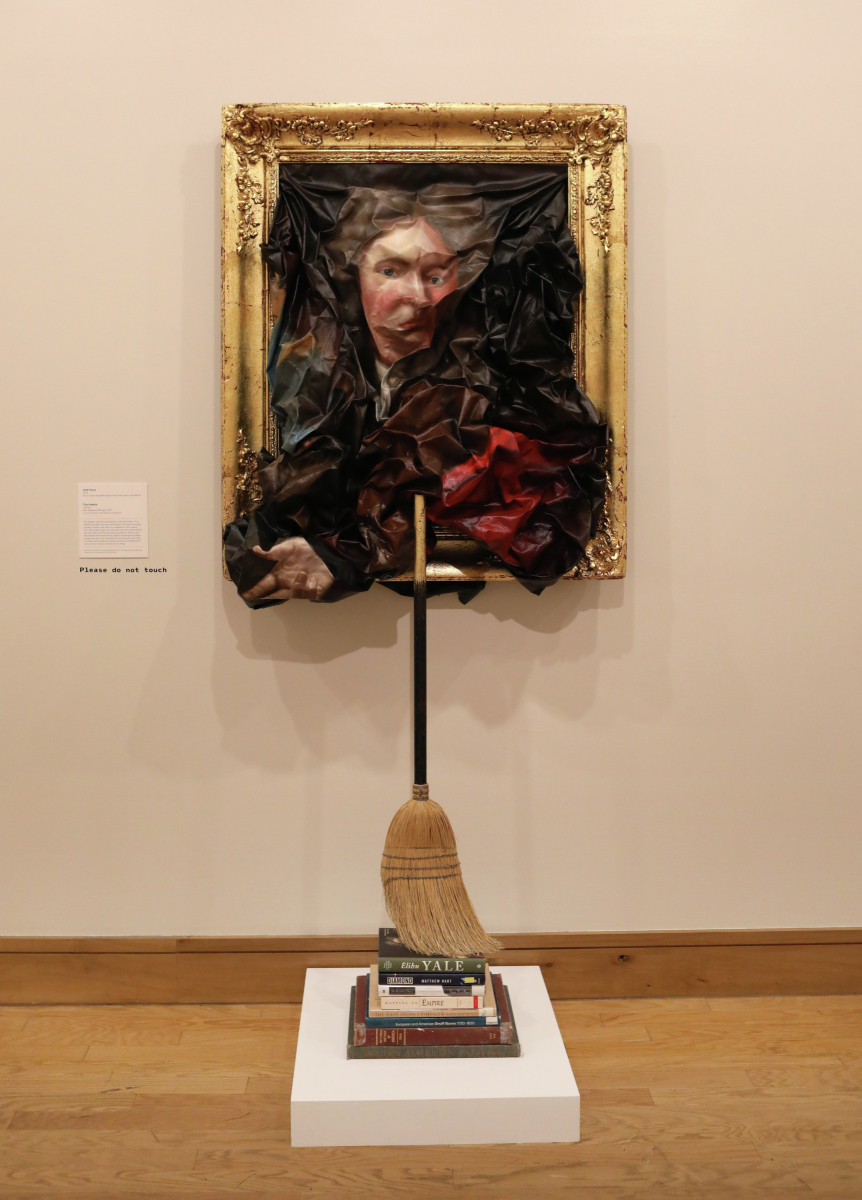 Much of American art omits the very real history of colonialism and the human trafficking of enslaved people. In Unfit Frame, Titus Kaphar calls attention to Elihu Yale, here portrayed on a buckled and sagging canvas. The namesake for Yale University, Elihu Yale was a British slave trader and president of the English East India Company in Madras, India. With this work, Kaphar invites the viewer to examine the untold stories that have been disguised behind the institutions we venerate, the paintings we study, and the books we read. Are the books at the base of this work upholding the historical narratives we have been fed, or do they work to open our eyes to injustice?

Douglass is remembered as a fine painter, etcher, and lecturer, though in much of her early life she primarily supported herself financially by painting commercially, items including china and place cards. Undated, these two charming charcoal drawings by Lucille Douglass, an Alabama native, were probably done around 1908. Douglass attended the Art Student League in New York from fall 1908 to spring 1909 where students focused on figure drawing from a live model. A world traveler, Douglass became well known for her etchings of Chinese pagodas and Cambodian temples. 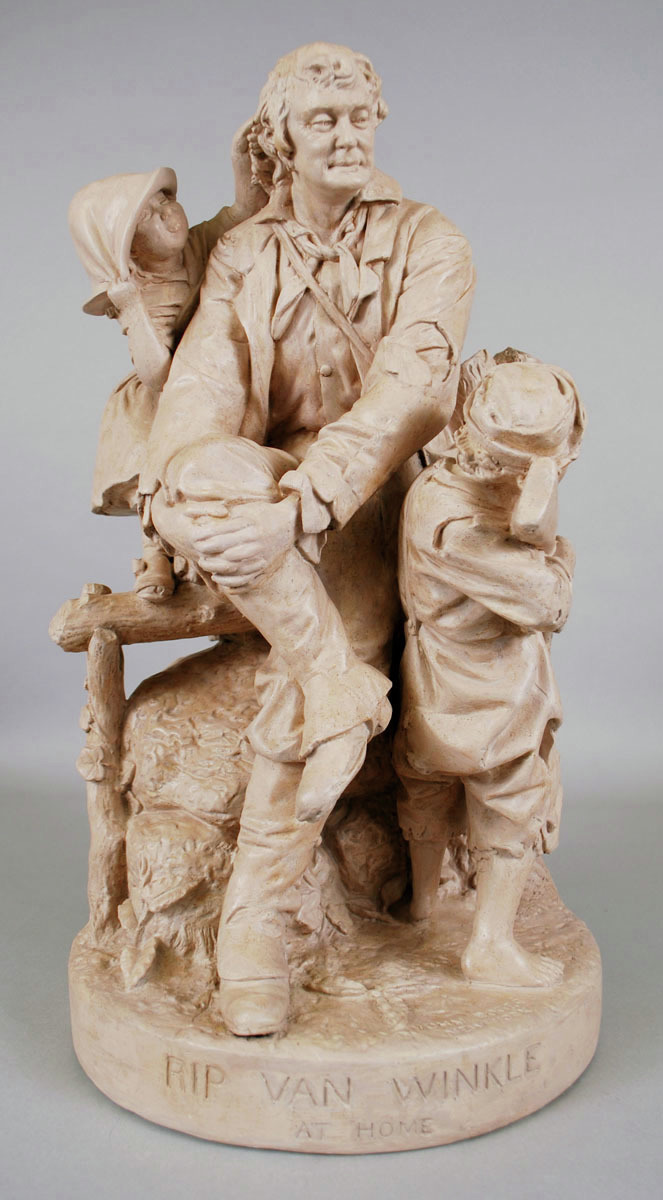 John Rogers was known for his interest in storytelling. Rip Van Winkle, a beloved literary character from author Washington Irving, is seen here flanked by two children. Per the story, Rip Van Winkle was a loved and cherished member of the community by all except his wife. One fall day, he wanders off and meets a group of men, rumored to be ghosts. He drinks their liquor and settles for a nap. Upon waking and returning to his village, he learns that 20 years have passed.

Pieces such as this were very popular and relatively inexpensive, averaging $14 during the late nineteenth century, making the small plaster sculptures affordable to the middle class. Additionally, literature was beginning to grow in popularity. The accessibility of Rogers’ works draws a nice parallel to the accessibility of literary works popular in the decades after the Civil War. 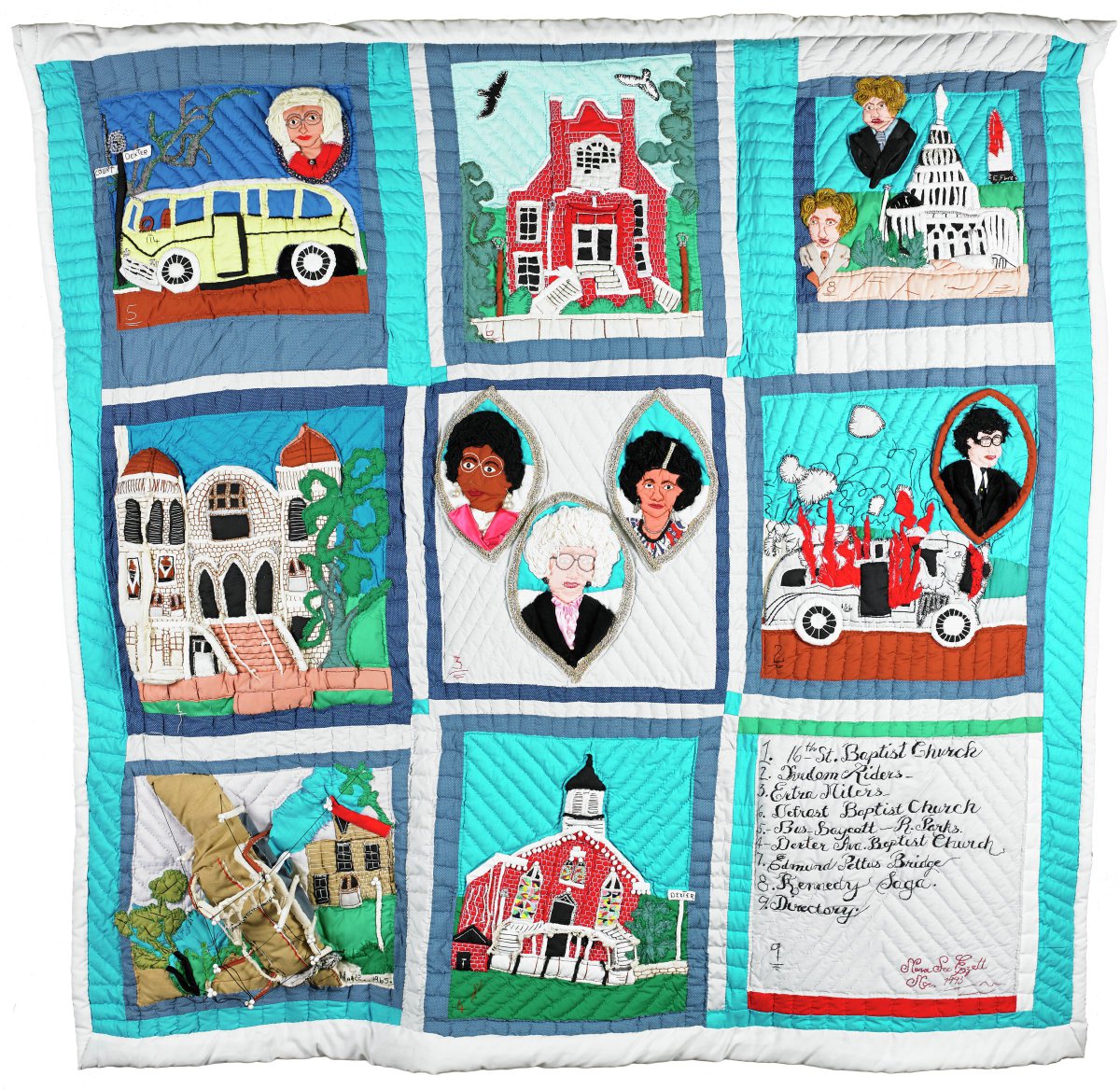 In the tradition of stained glass, this quilt, stitched in Alabama in 1993, serves as a vibrant visual storyteller.

Divided into nine sections, quilter Nora Ezell commemorates the Civil Rights movement. Illustrated in cotton and embroidery floss, we see Rosa Parks and the Montgomery bus boycott, the 16th Street Baptist Church, the Edmund Pettus Bridge, Dexter Street Baptist Church, and the Freedom Riders. In her diary, Ezell says she spent 1,568 hours stitching this quilt. She felt it was her best work.

Ezell, Nora McKeown. My Quilts and Me: the Diary of an American Quilter. Montgomery, AL: Black Belt Press, 1999.