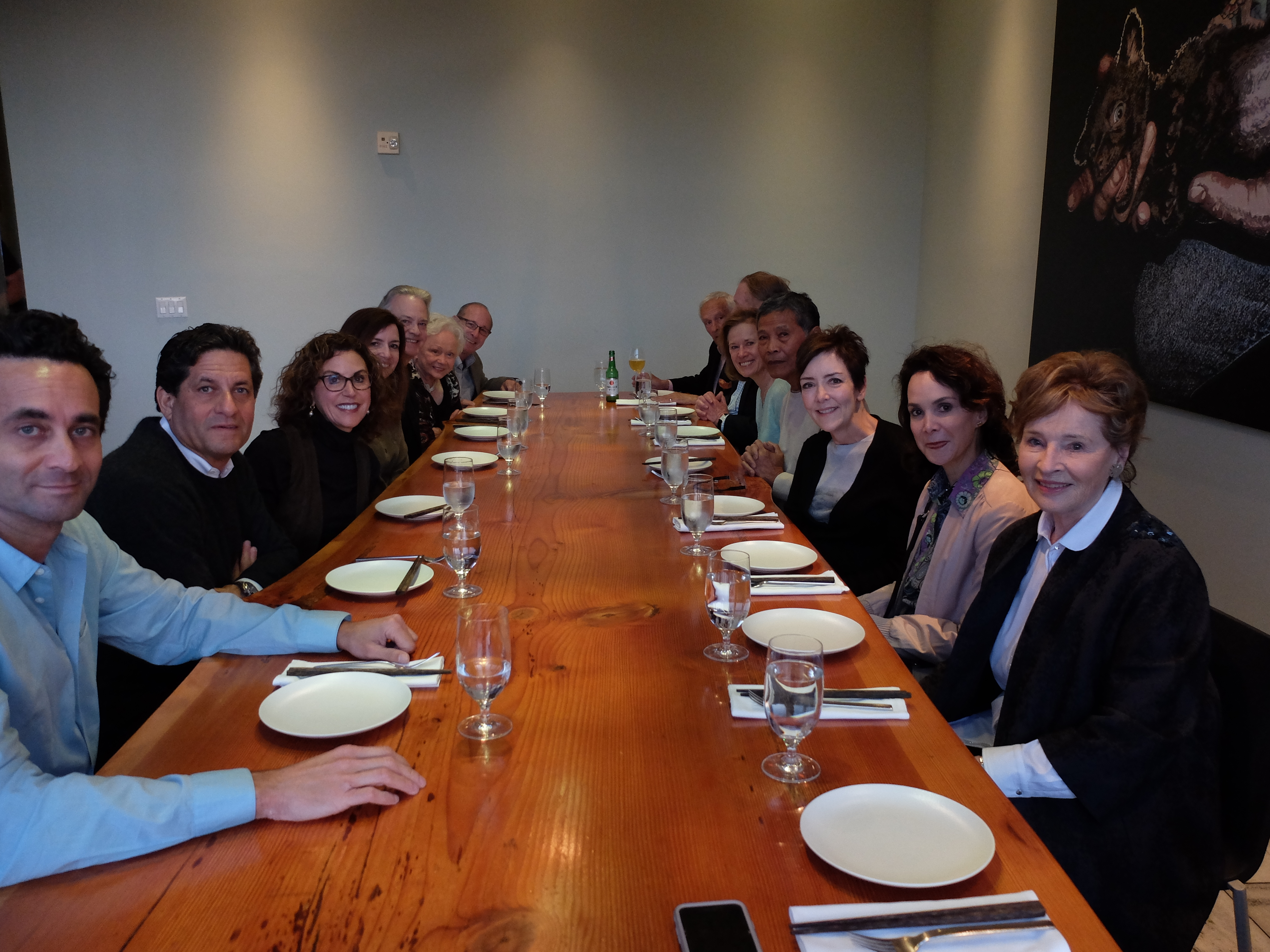 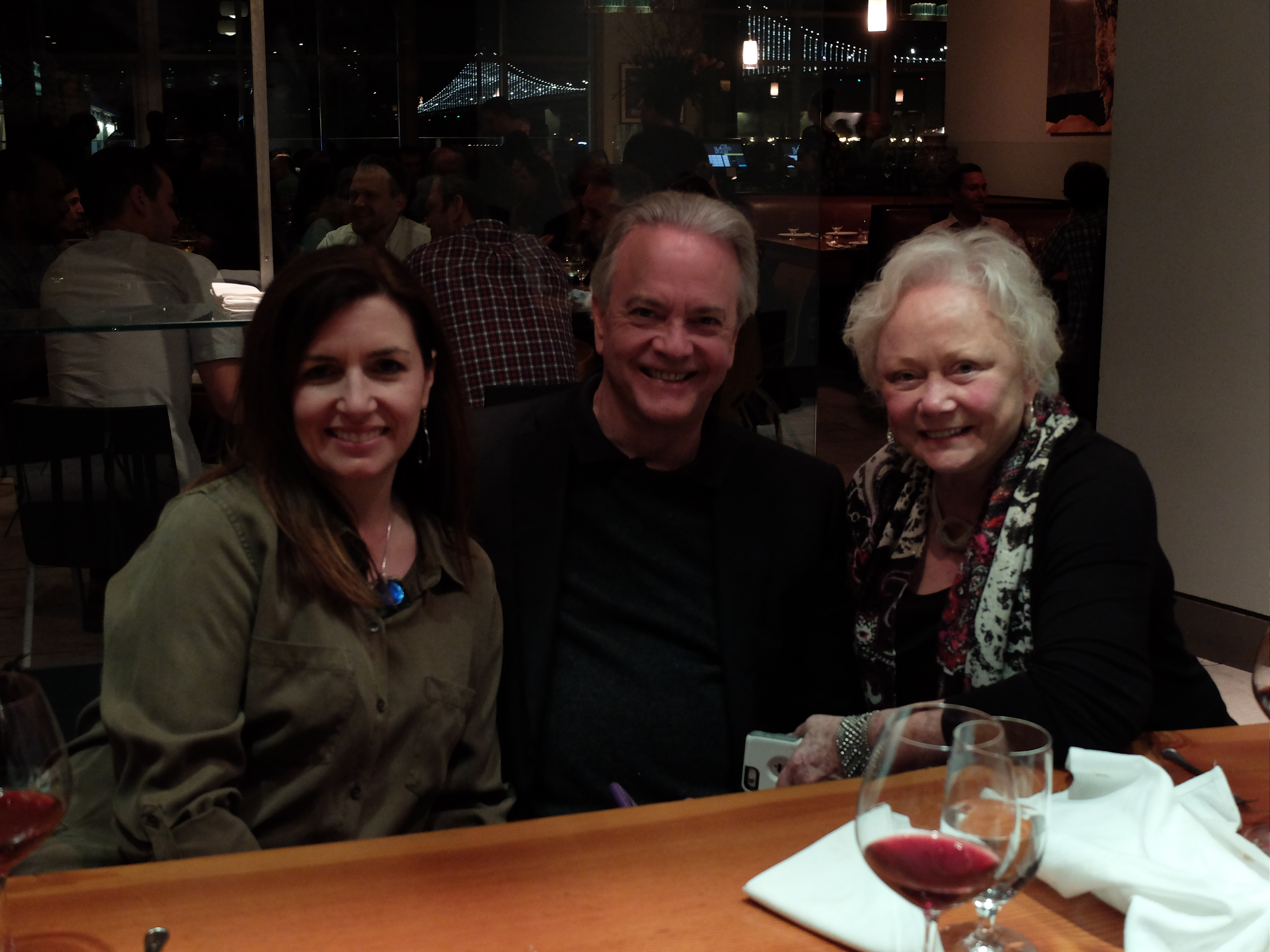 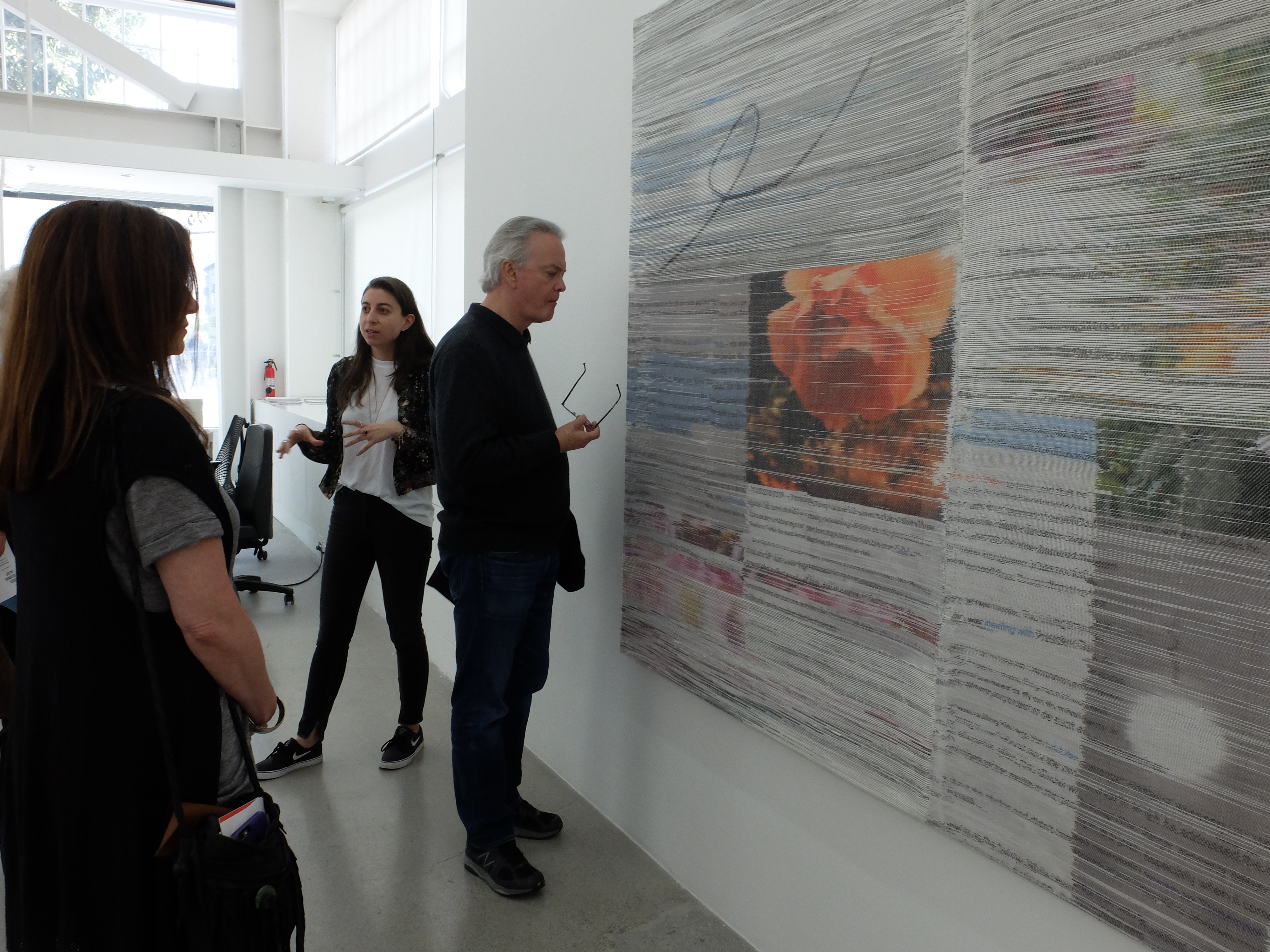 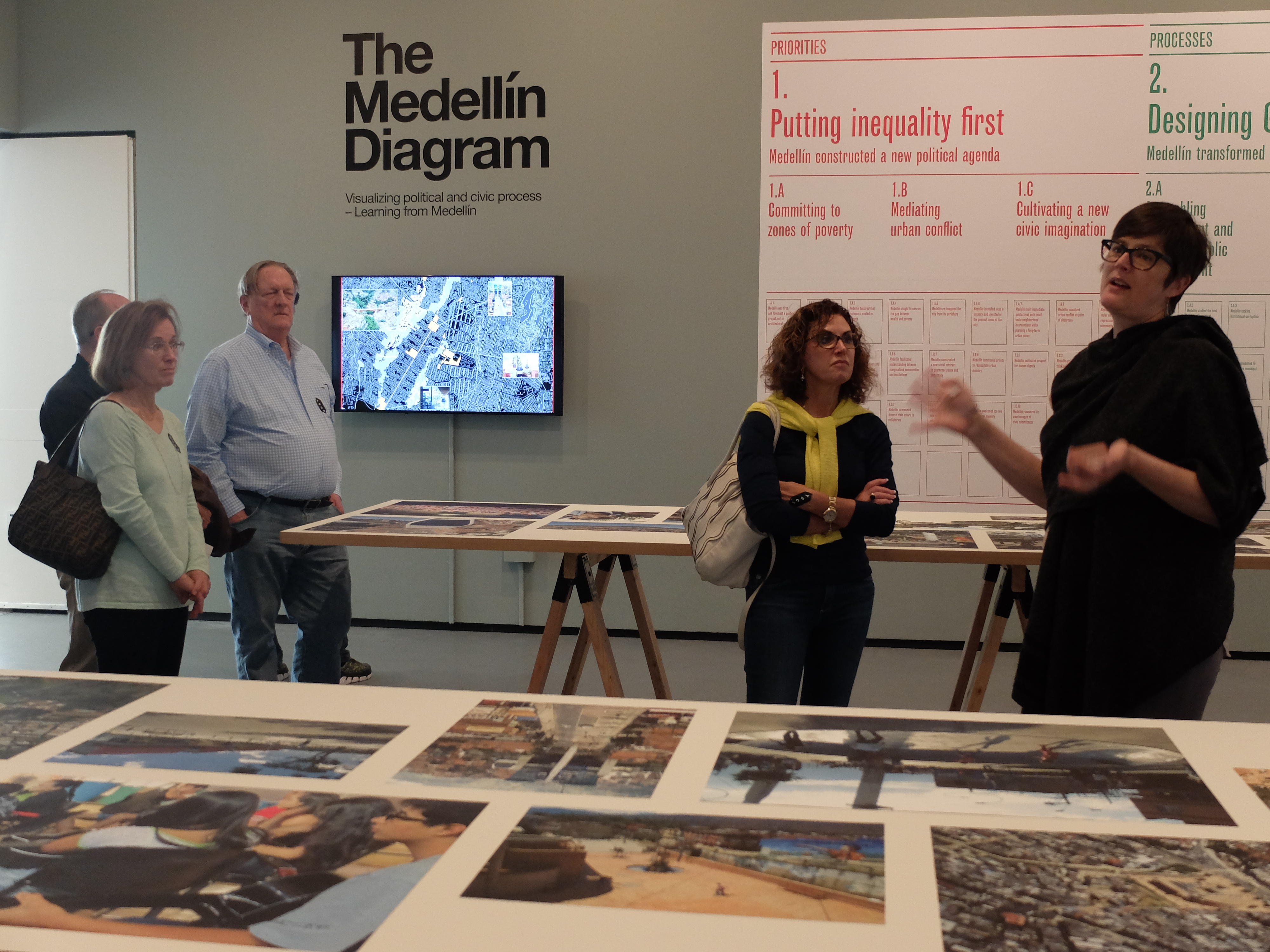 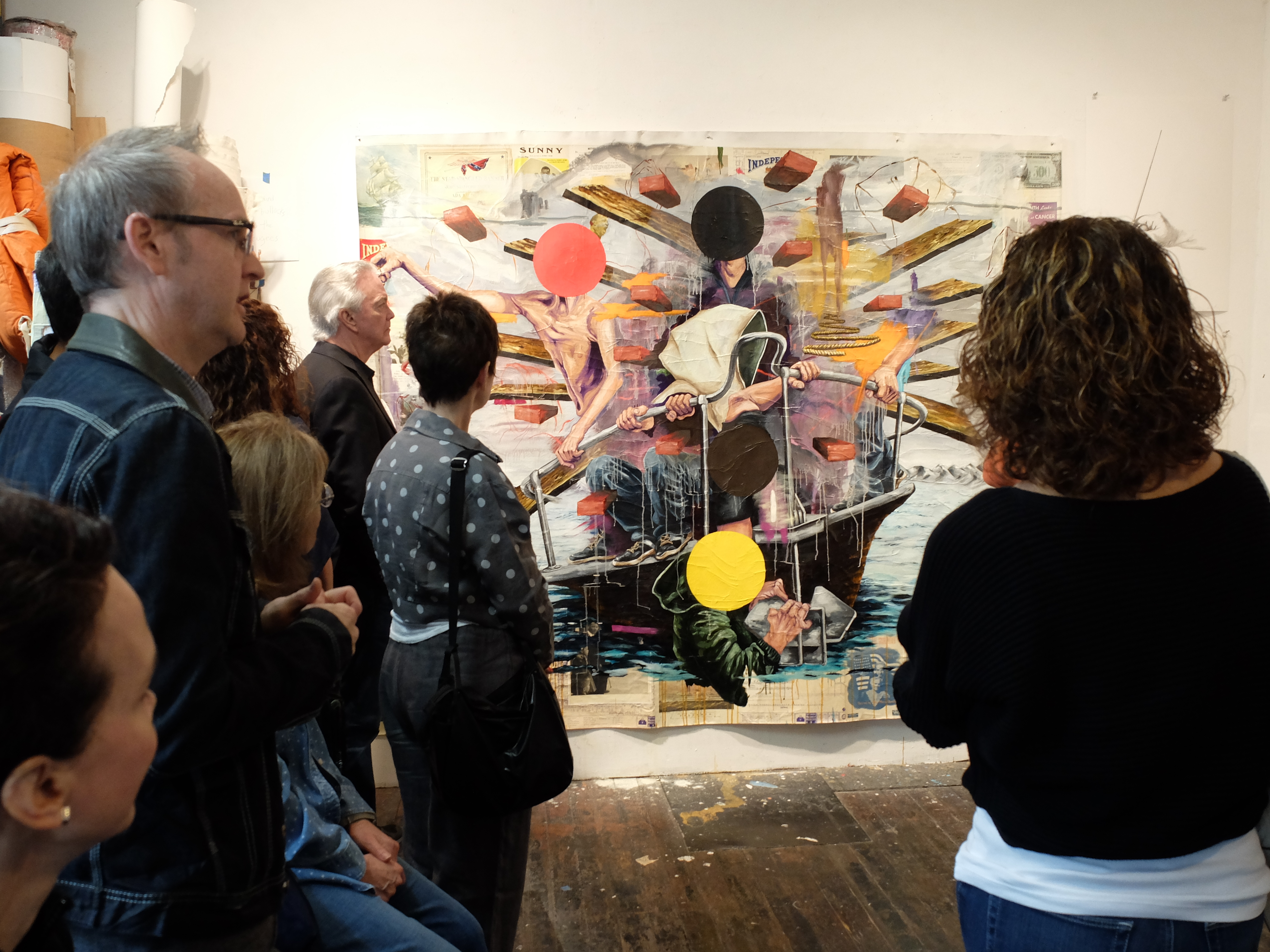 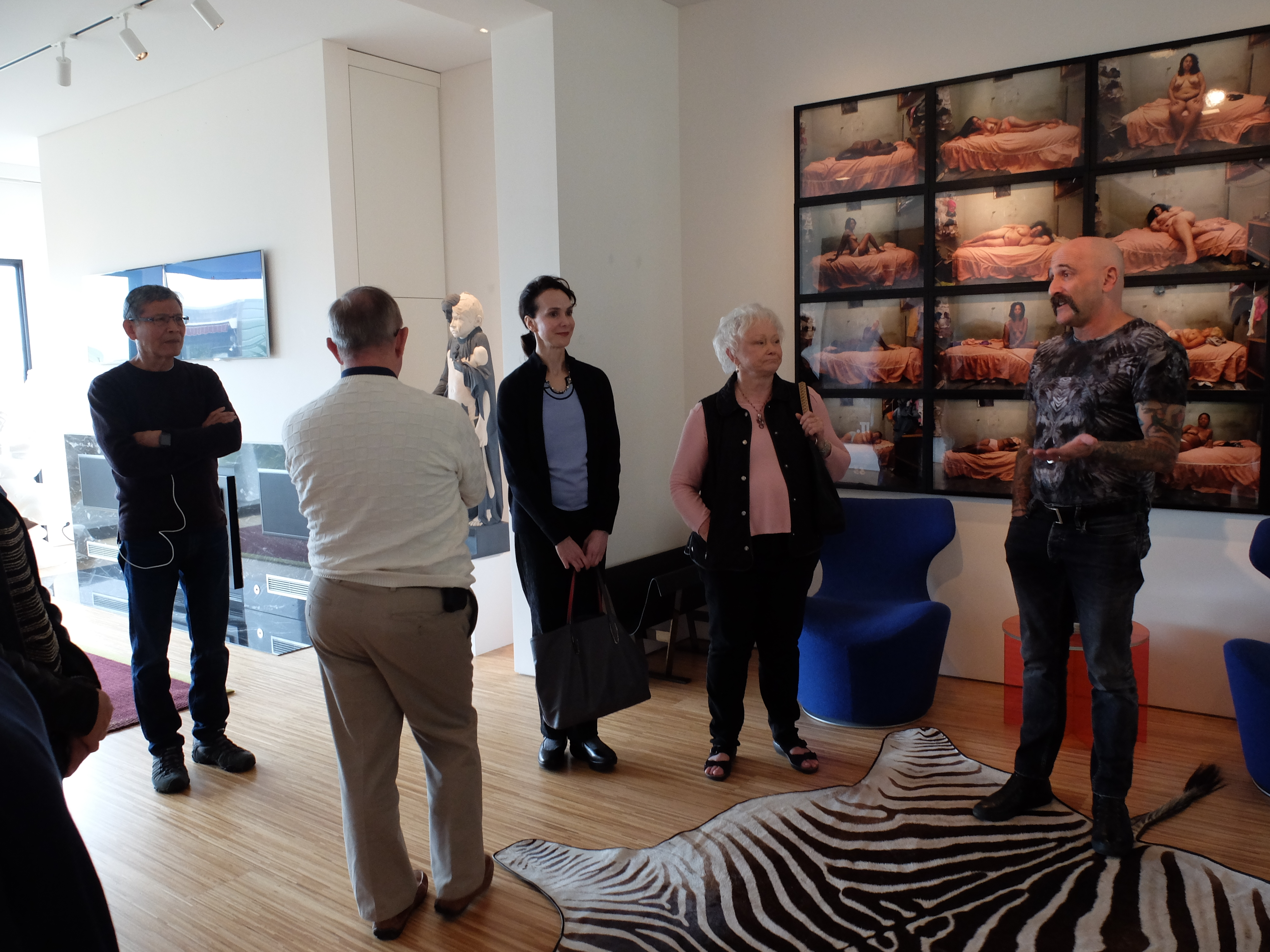 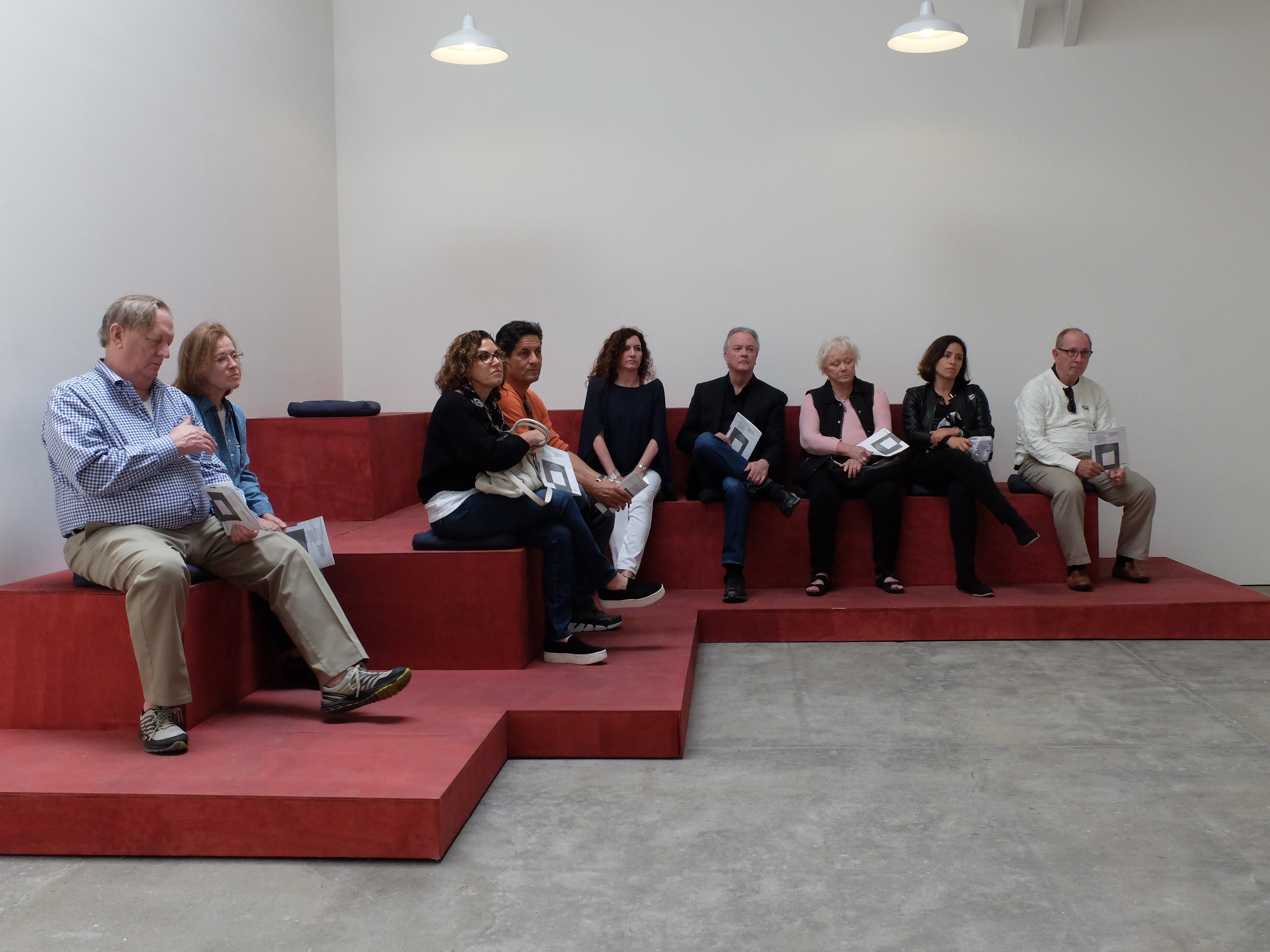 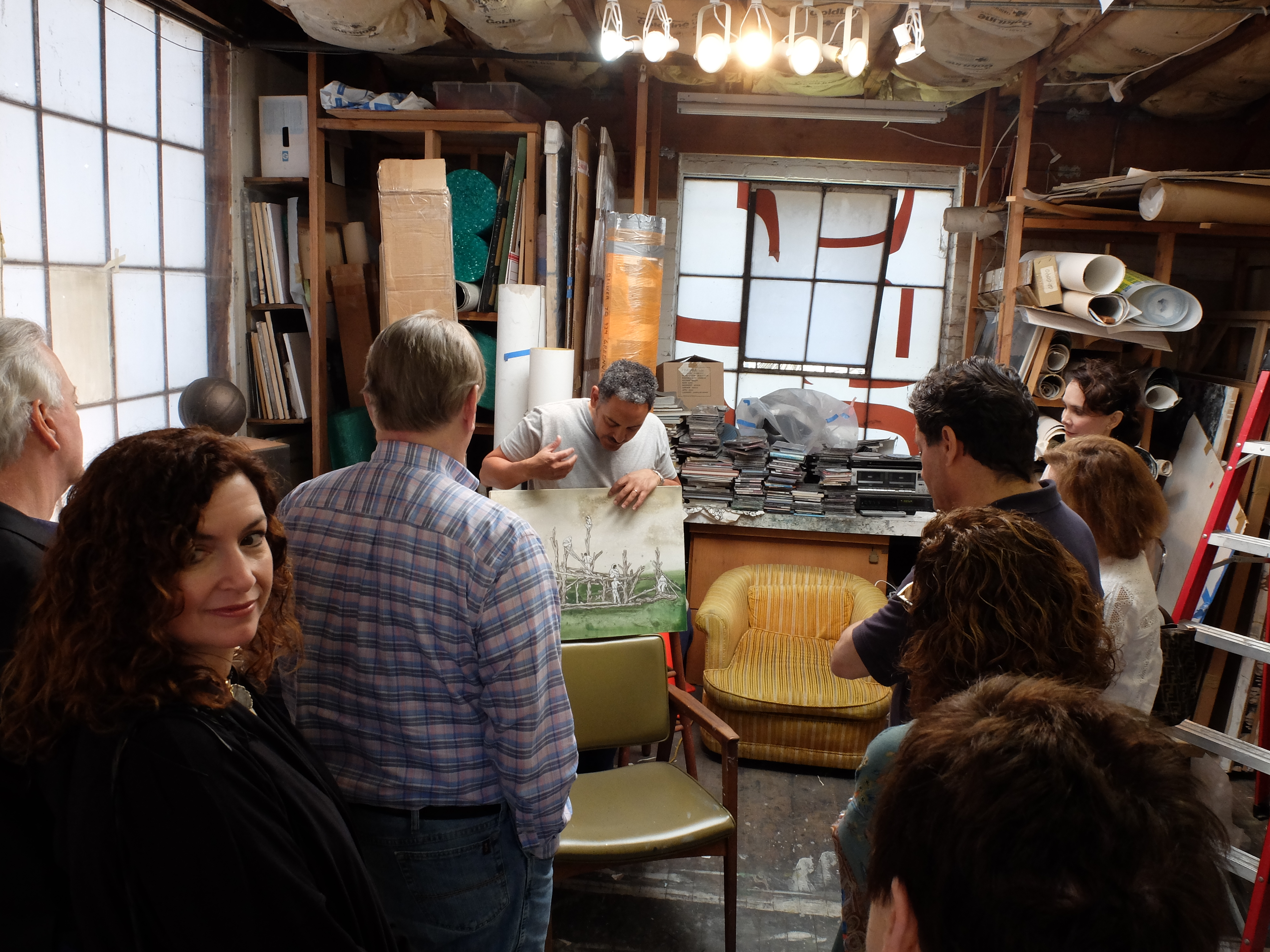 The group consisted of local members, Rebecca and Jack Drake, Cheryl and Sam Pathasema, Dr. Lisa Mani and her brother Mark (visiting from Los Angeles), Dr. Melanie Appell and Michael Randman, Becky Patterson and Doug McCraw, Laura Sappington and Robin Morgan, and our Canadian friends, Margella Leggat and Michael Nesbitt. The group was expertly led by Wassan Al-Khudhairi who is sadly leaving us for a new position in St. Louis.

We began on Friday with a private tour at the recently reopened and expanded SFMoMA. Before beginning our tour of Diane Arbus’s early works, we explored the lower galleries and public spaces. We saw a clever Chris Johanson construction piece at the entrance and an impressive Richard Serra sculpture in the lower main gallery. After the Arbus exhibit, we saw a major retrospective of local photographer, Larry Sultan, an internationally recognized photographer. (We later saw Sultan’s work available for purchase at the Casemore/Kirby Gallery at Minnesota Projects.).

After lunch at the Museum on a spectacular San Francisco day, we had tickets for the special Matisse/Dieberkorn exhibit. Richard Dieberkorn is a bay area artist that was profoundly affected by his encounters with Matisse’s early work. Afterwards, many of us visited the extraordinary Fisher collection of German expressionist paintings located on the 6th floor of the museum. The Fisher collection is noted for its deep and extensive collection of Anselm Kiefer paintings.(some of us went next door to the new Gagosion Gallery to look at an Ed Rusha exhibit).

We then walked over to the Yerba Buena Center and saw a Lynn Hershman Lesson exhibit and an interesting political piece by Teddy Cruz and Fonna Forman. Some of us had the energy to visit the Jessica Silverman Gallery(Margo Wolowiec). We had an amazing dinner At the Slanted Door, a James Beard winner located on the pier.

Saturday began with a tour of Travis Somerville’s’ studio in an old navy yard building south of town. (This historic building once housed the atomic bombs used against the Japanese in World War II. ! )

Travis Somerville is an interesting artist-he is represented by Guido Maus, a local Birmingham dealer, but sells primarily in Europe and the Bay area. Somerville is a native of Georgia, but was raised in a very progressive, white household. His work explores racial and political issues that greatly affected him growing up in the rural south in the 70 and 80’s. He works mostly on canvas and wood but makes larger pieces and collage. We found him very literate and engaging… and the group responded to his work.

After lunch in “Dogpatch”, a trendy area south of downtown, we headed over to the house(s) of Jeff Dauber, a former Apple executive and major collector.

Jeff was friendly and entertaining but his art work was very strong-not for the timid. As he said “I like to find the stuff that’s a kick in the teeth”. Works by his friend Travis Somerville as well as work by Deana Lawson, AL Farrow, Cuban artist Enrique Rottenberg, the aforementioned Larry Sultan, Alec Soth, and Mickalene Thomas were on display. We had to walk across the street to another house he owns to see even more work. It was a unique and compelling tour that everyone talked about throughout the trip.

We eventually ended the day at the Minnesota Street Project, a large industrial art space located in Dog Patch. Here we saw works for sale by Larry Sultan, Chris Johanson and other local Bay area artists. Saturday was a free night that allowed us to absorb and unwind from a busy day.

On Sunday, we started the morning by going across the Bay Bridge to Oakland to visit the studio of David Huffman.

Huffman met us at his studio. He grew up in the East Bay area(his mother did art for the Black Panthers). We were fortunate to have Jack and Rebecca Drake with us. They have collected David’s work in the past and have a warm relationship with him. This made the artist comfortable with our group. His recent work was so impressive that many in the group purchased his work. Besides being beautiful and well made, Huffman’s work explores the black identity today in a highly political and divided America. Through various iconic images and phrases, such as basketballs and the repetition of politically loaded phrases such as “I can’t breathe”
that is repeated on his canvases. A very special visit.(blocks of homeless tent cities were all around us here).

On a lighter note, we headed to Berkeley to see the Berkeley Art Museum where they had a fun show “Hippie Modernism”-it brought back some crazy memories!

We headed south to the Stanford campus for our final museum and studio visit. We saw the fabulous Anderson Collection of midcentury American art.(incredible Rothko) and a Nick Cave sound suit exhibit(some suits donated by Jeff Dauber). We also didn’t want to miss the wonderful Rodin collection at the Cantor Center- the largest outside of France.

We ended our day at the studio of Ala Ebtekar, a Persian American artist doing extraordinary work that combines science and Persian history which he updates and adapts to modern expression. Ala trained in an ancient Persian technique of illustration that totally captivated the group. Ala was both engaging and instructive.

Farewell dinner took place Sunday night at Boulevard, a classic restaurant located across our hotel. This summary barely touches on all that we were able to see and do. A trip none of us will soon forget.