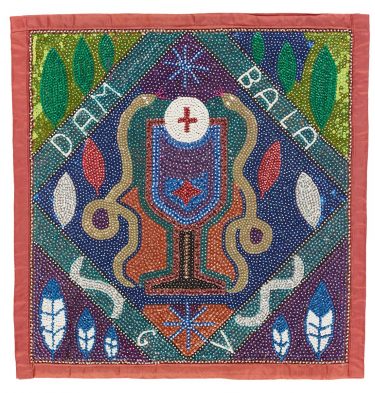 Beaded and sequined flags, called drapo, are an important component of Vodoun, a religion that was established on the island of Haiti beginning in the 1500s. The Spanish, followed by the French, enslaved hundreds of thousands of West and Central Africans who were brought to labor on Haitian sugarcane plantations. The faith system that emerged, under extremely brutal conditions, combined various African beliefs and practices that connected people to divine sources of strength – spirits called loa – who serve as intermediaries between God and human beings.

Because Vodoun was outlawed, and conversion to Catholicism was forced, practitioners often identified symbols and Saints from the Catholic religion to represent spirits from their hidden faith. Other European traditions in Haiti also became sources of symbolism in Vodoun, including imagery from the Society of Freemasons.

In both African and European traditions, flags and banners are symbols of identity, power, and authority. When used in Vodoun ceremonies, flags represent the loa spirits and are carried into sacred spaces of worship, and even worn over the shoulders. The shimmering banners evoke the great mystery of the loas, who helped Haitians survive unimaginable oppression and obstacles.

In the last 50 years, flags began to be collected as works of art by people visiting Haiti. Flags are now made for both purposes – for ritual use, and for the international art market. This superb collection of Haitian flags is a small portion of the Robert Cargo Folk Art Collection, just under 700 objects generously given to the Birmingham Museum of Art in 2013 by Robert Cargo’s daughter, Caroline Cargo.