All the Colors of the Rainbow

For the past decade, ikat patterns have permeated the fashion and design industry, touching everything… 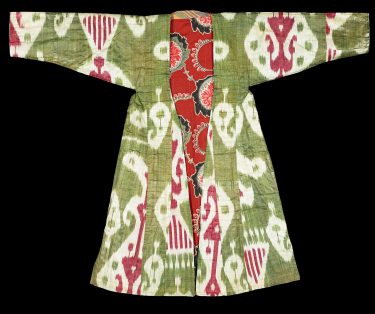 For the past decade, ikat patterns have permeated the fashion and design industry, touching everything from clothing and furniture to decorative arts. Despite its recent ubiquity, the ikat tradition has roots that go back centuries and cross many different cultures.

Ikat is a complex dyeing technique used to pattern textiles by employing a resist dyeing process similar to tie-dye, and the resulting cloth is often made into garments using a varied combination of colors. The word ikat (pronounced ‘ee-KAHT’) comes from the Malaysian word “menjikat” meaning to tie. The technique developed independently in several parts of the world, namely South America, Japan, Indonesia, India, and western Central Asia.
All the Colors of the Rainbow presents a vivid collection of ikat garments created in Uzbekistan in the 19th century, comprising robes, shoes, hats, bags, and even jewelry.

Modern Uzbekistan includes many of the great cities of the ancient Silk Road and has been an important crossroad for trade for centuries. The very term “Silk Road” defines one of the principle goods carried through Central Asia from China to the Mediterranean Sea. Used as currency and a luxury good, literally millions of bolts of silk changed hands over the centuries. Relatively lightweight, easy to transport, and aesthetically desirable, silk was a staple product of trade.

The making of many Uzbekistan ikat begins with the production of silk. Women raised silk worms that were then sold in the bazaars to men, who in turn unwound them into thread that was then dyed and finally woven into cloth. Historically, clothing represented rank and status in the oasis communities. The wealthiest residents wore costly, bright silk ikats, while those in lesser positions wore similar robes made of cotton. The ikat robes produced in Uzbekistan in the 19th century came in a wide spectrum of vibrant colors and were used as clothing, decoration, and gifts.

Though the Birmingham Museum of Art has hosted and originated many exhibitions concerning various aspects of Asian art over the years, this is the first to feature pieces from Central Asia. We are proud to expand our horizons and present these wonderful Uzbekistan treasures from the collection of Peggy Slappey.