Alfred Powell (1865-1960) and his wife Louise (1882-1956), granddaughter of Émile Lessore, began to create designs for Wedgwood around 1903. Working from their London studio, the couple—influenced by the Arts and Crafts Movement—introduced a number of natural styles that were easily adapted to industrial production at the factory. The Powells also held exhibitions of their work at their studio together with other Arts and Crafts artists, thereby promoting not only the ideals of the Movement, but their own Wedgwood wares as well. The couple also visited the Wedgwood factory often to purchase blanks and teach other pottery painters working there to paint their designs, as well as those adapted from Wedgwood’s old eighteenth-century pattern books, freehand. The relationship between the Powells and the Wedgwood company lasted until well after the First World War as the Powells continued to create designs for Wedgwood and to train painters at the factory. Their influence was far reaching and like Émile Lessore and Thomas Allen they helped to revive the tradition of hand-painted pottery at the factory, which in turn contributed to the restoration of the Wedgwood reputation in the twentieth century. 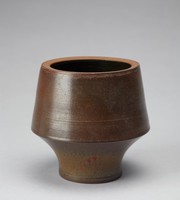