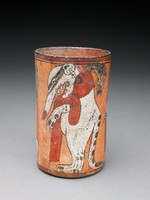 A procession of three animals moves across this colorful vase: a monkey, a jaguar, and a coatmundi (similar to a raccoon). Certain characteristics identify them as supernatural creatures rather than actual animals, including the red scarf knotted around each animal’s neck, patterns on the jaguar’s front and rear paws and its blood-shot eyes, and the monkey’s long ear. The Maya buried cylinder vessels in tombs, served food and drink in them, and used them during rituals. 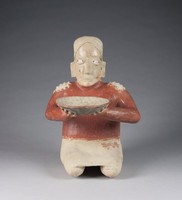 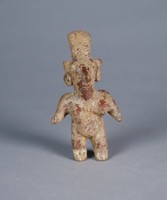