Millicent Taplin joined Wedgwood in 1917 and quickly became associated with Alfred and Louise Powell, who trained a number of ceramic painters at the factory. During the 1930s, Taplin designed several original patterns in the popular Art Deco style that often incorporated the use of lustre decoration. After World War II, Taplin became head of the hand-painting department, where she remained until her retirement in 1962. During this time she painted a number of vases designed by her colleague Norman Wilson. 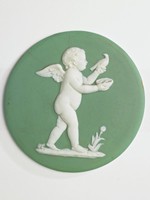