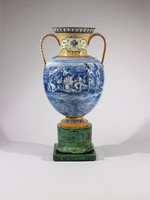 This enormous vase, one of the largest objects ever produced by the Wedgwood factory, was originally one of a pair, possibly made for the London International Exhibition of 1862. The scene on the front of the vase depicts Alexander the Great, accompanied by his friend Hephaestion, entering the tent of the Persian King Darius III after Le tente de Darius by Charles Le Brun (1619-90) from the Triumphs of Alexander series painted between 1662 and 1673. Le Brun created the series to allude to the grandeur of the reign of King Louis XIV of France, who likened himself to Alexander. Lessore used as his prototype an engraving of the painting by the Flemish artist Gérard Edelinck (1640-1707), which was made to complete the series otherwise engraved by Gérald Audran (1640-1703). The painting, which continues around the body of the vase, shows on the reverse a landscape typical of Northern Africa. The pair to this vase is now in the Wedgwood Museum in England. 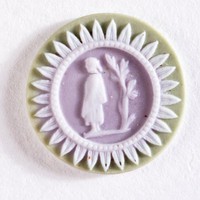 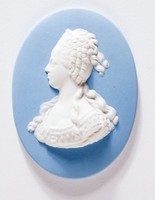