Humanity, the world over, constantly grapples with life-threatening challenges—both physical and mental, historically and currently. This focused digital exhibition introduces different ways cultural traditions in India, Indonesia, Thailand, Tibet, Mongolia, and Vietnam have addressed these challenges artistically. All these works were intended to provide focus for hope and action as well as soothe despair. They address quelling the demons of family feuds, infertility, famine, natural disasters, and profound grief for lost life as well as the uncertainties of the future. Over the centuries billions of individuals have taken comfort from their stories—stories not only of survival, but also triumph for a better future for all who come with sincere hearts and minds.

Action-Hero of Indonesia and India! 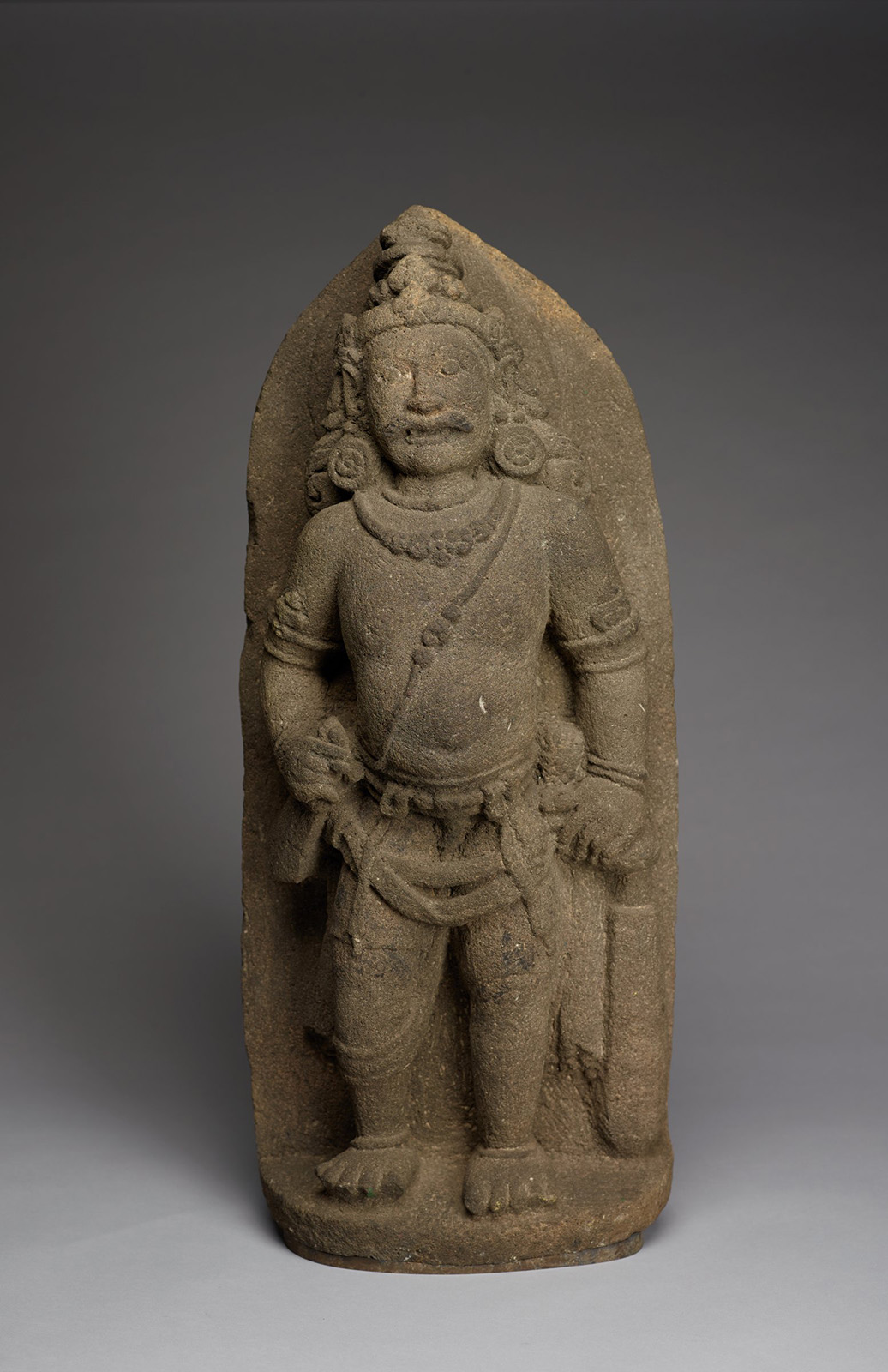 At his side, look for the tell-tale mace, a form of cudgel like a baseball bat. Also notice his muscled body, full moustache, curly hair, crown and diagonally draped sacred thread. These elements identify this figure as Bhima, a heroic character in the battle-ridden epic narrative the Mahabharata. He is the second of the five Pandava brothers who are the rivals of their cousins the Kaurava family. In Java, this heroic character took on a new life as from the Majapahit period (1293-1517) when Bhima became a central focus of devotion rather than a supporting figure. Initially considered a form of the Hindu god Shiva, in later times local Muslims honored him as a Muslim hero.

Today, Bhima remains a popular figure worshipped to rid the rice fields from devastating parasites, thus preserving the primary food source. The mudra gesture of his right hand—when properly empowered—is believed to grant a child to the childless. Additionally, he is the star of a number of theatrical events—ranging from wayang shadow-puppet plays to contemporary live action and animated movies. For example, in his namesake play “Bhima-swarga” he rescues his parents from hell and delivers them to heaven.

To hell and back, a tale preaching self-improvement 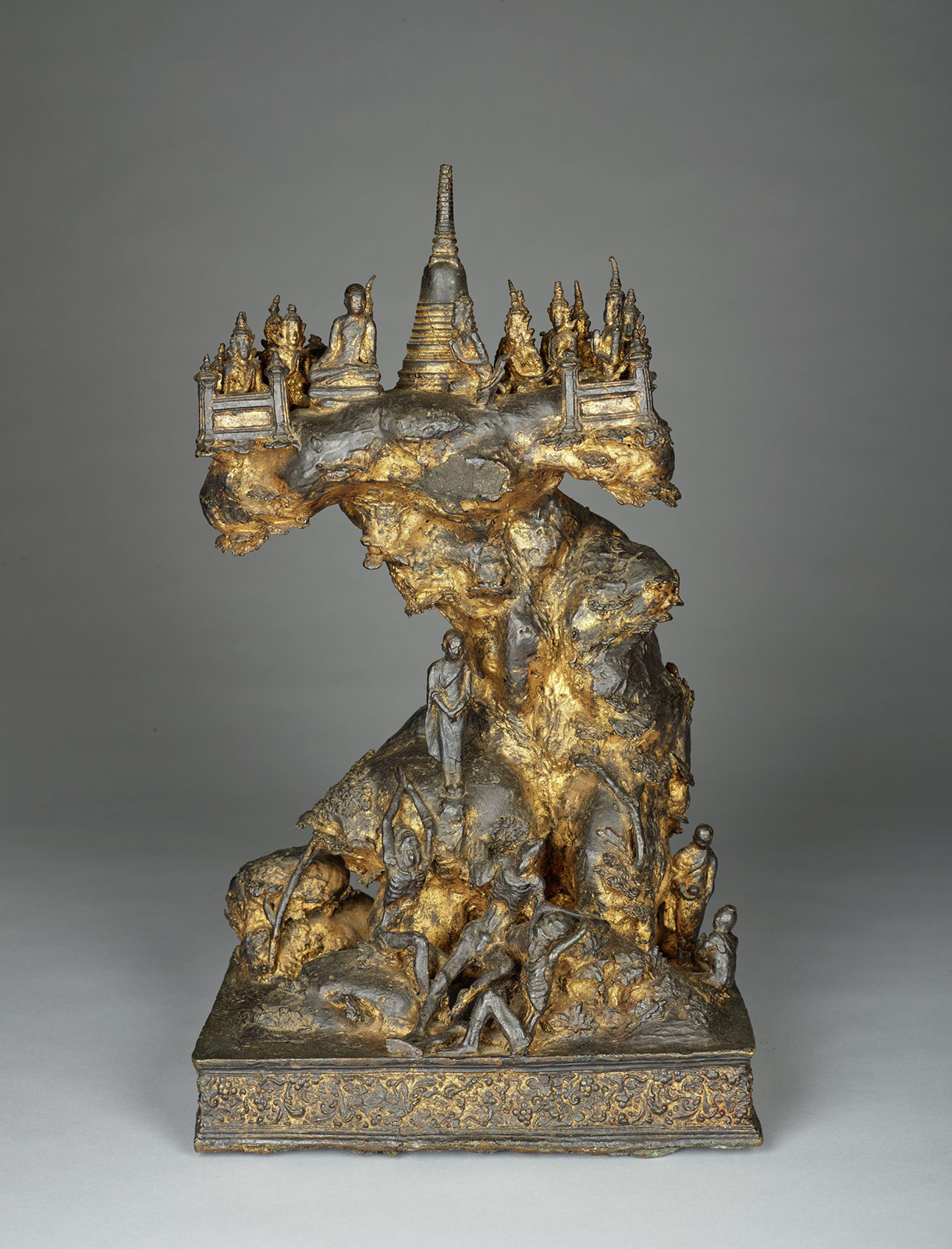 This work is a visual narrative of a morality tale popularized in Thailand. The hero is the Buddhist Monk Phra Malai. The Buddhist worldview (like that in Hinduism and Jainism) describes time as cyclic with most people being reborn over and over again until they are able (through their spiritual practice) to attain nirvana or moksha—freedom from the cycle of rebirth. If, however, you behave badly in this life you may be reborn as an animal, hungry ghost, human in terrible circumstances or even a god or demi-god. Because he has behaved in the most kind, generous and moral manner—not only in this life, but also in his previous lives—the Monk Phra Malai has great merit. Merit here is the spiritual currency that Buddhists strive to acquire not only for themselves, but also for their loved ones. The greater merit you have, the more likely you will be reborn in a good situation or, as even be able to do something extraordinary, like go to hell and back. The story is told with three scenes all depicted in one sculpture: 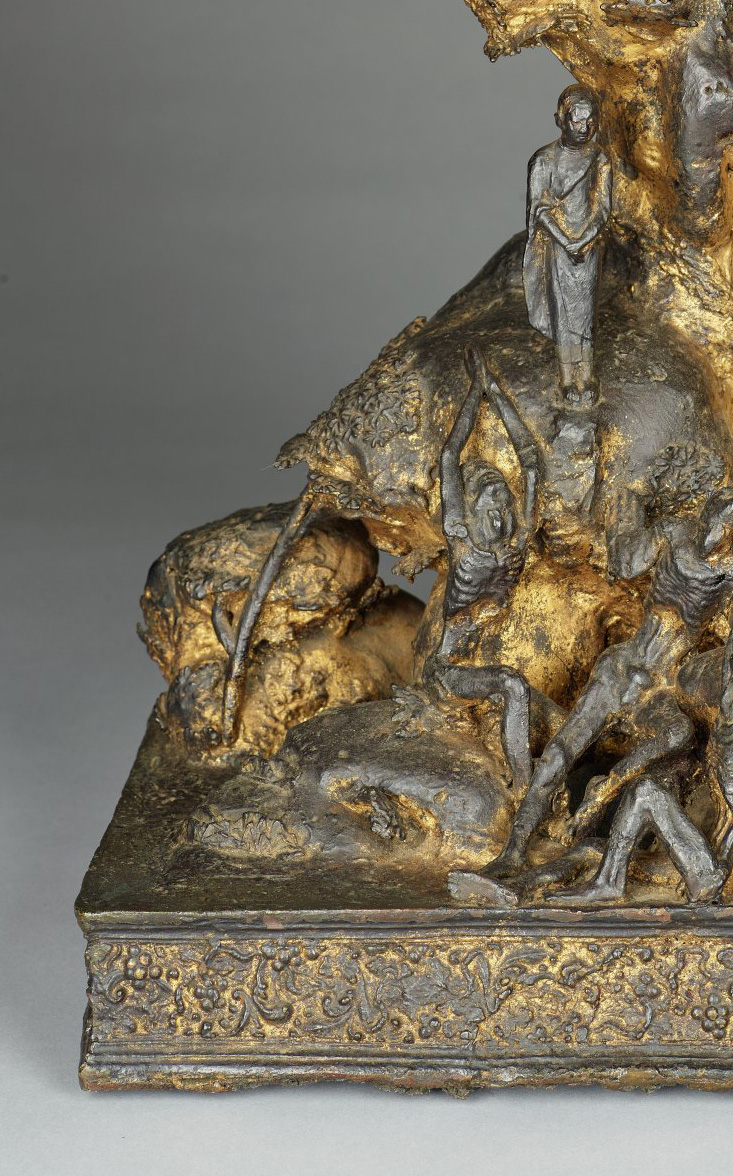 The Monk Phra Malai travels to hell to visit the damned in order to ease their pain. The shaven-headed monk stands above three emaciated souls in hell. Two of these figures raise their hands above their heads in a gesture of penance and repentance. They beg the Monk to ask their living relatives to make merit for them through religious acts that will shorten their time in hell and hasten their next rebirth. 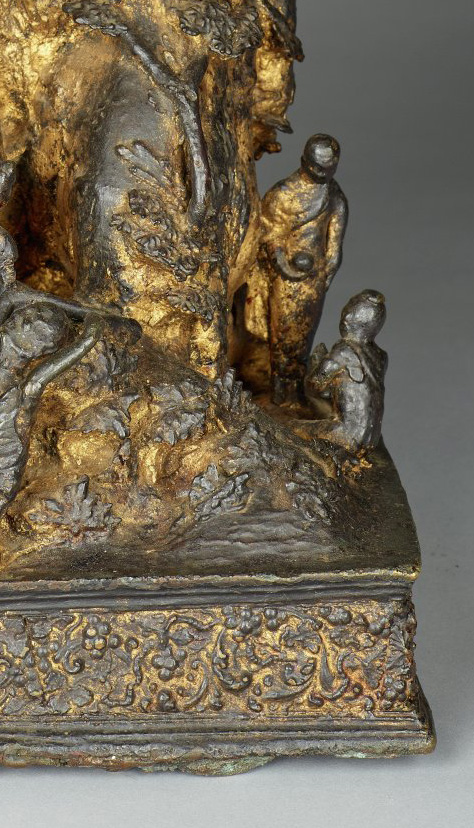 Upon leaving hell, the Monk delivers this message to the relatives of the hell residents. The Monk then meets a poor man who kneels before him and offers a bouquet of eight lotus flowers. Offering flowers to monks is a merit-making activity. The poor man makes this offering to be born in a better future rebirth.

Scene 3: Speaking with the Gods in Heaven 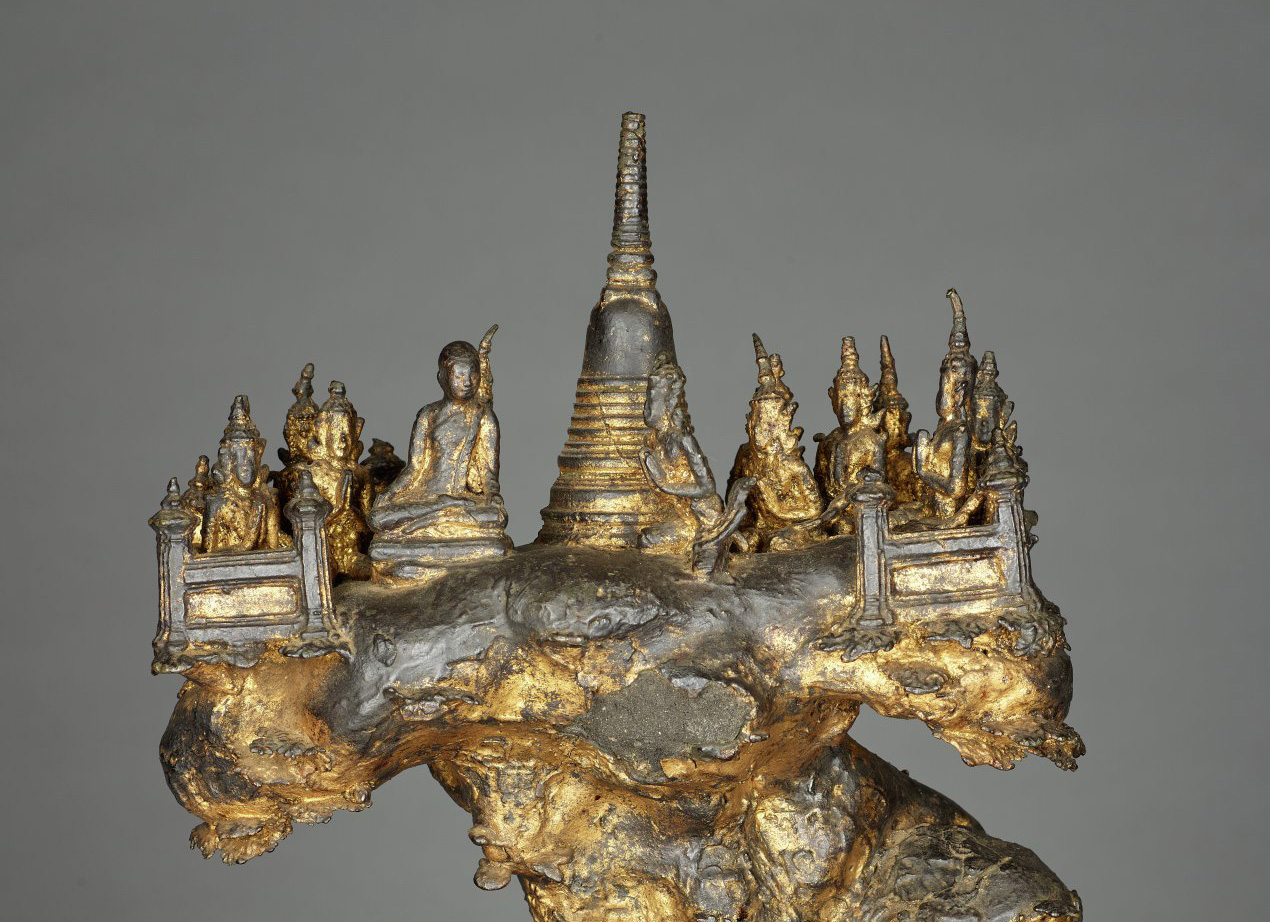 Extraordinarily, the Monk takes the poor man’s bouquet to the Culamani Cetiya stupa in Tavatimsa Heaven as that will generate more merit for the poor man. While in heaven the Monk meets with Indra, King of the Gods. Indra explains he built the stupa (the conical solid structure with a spire) to house the Buddha’s hair relic so that all the gods could continue to make merit for their future rebirth. Metteya (also spelled Maitreya), Buddha of the Future, visits to share more methods of making merit for all.

Destroy the Armies of Death!

Yama, God of Death Embracing The Wheel of Life (Bhavachakra)

Held in the grip of Yama, God of Death, is an elegant pictorial explanation of samsara—the world of suffering. In the Buddhist world view, we all live in samsara. The outer rim of the wheel depicts the twelve interdependencies that cause rebirth: 1) delusion, 2) self-determination, 3) consciousness, 4) personality, 5) the senses, 6) contact, 7) feeling, 8) desire, 9) attachment, 10) development, 11) birth, and 12) death. The wheel spokes feature the six realms of rebirth: 1) animal, 2) human, 3) god, 4) demi-god, 4) hungry ghost, and 5) the hot and cold hells. 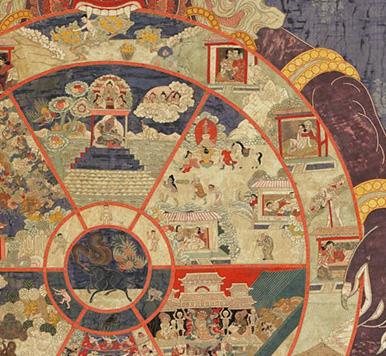 At the wheel hub are the three poisons: aversion, delusion, and greed, represented by the snake, pig, and bird respectively. These poisons keep one from attaining enlightenment thus reaching nirvana. Ringing the wheel hub within six wheel spokes are six souls cycling through the different realms of rebirth. The story of the historical Buddha Shakyamuni’s own life, that ultimately led to his own enlightenment is rendered as the human realm in the upper right.

Mural paintings of the Wheel of Life are displayed near the entrance to most Tibetan- Buddhist temples, a reminder of the conditions that come with rebirth that prevent one from reaching nirvana. In the lower right, the monk sits in a cave and, through his act of meditation, evokes all that appears in the rest of the work of art.

The inscription in the upper left reads,
“Make a beginning and renounce the world
Enter into the path of the enlightened ones
As a great elephant would crush a reed hut, destroy the armies of death!” 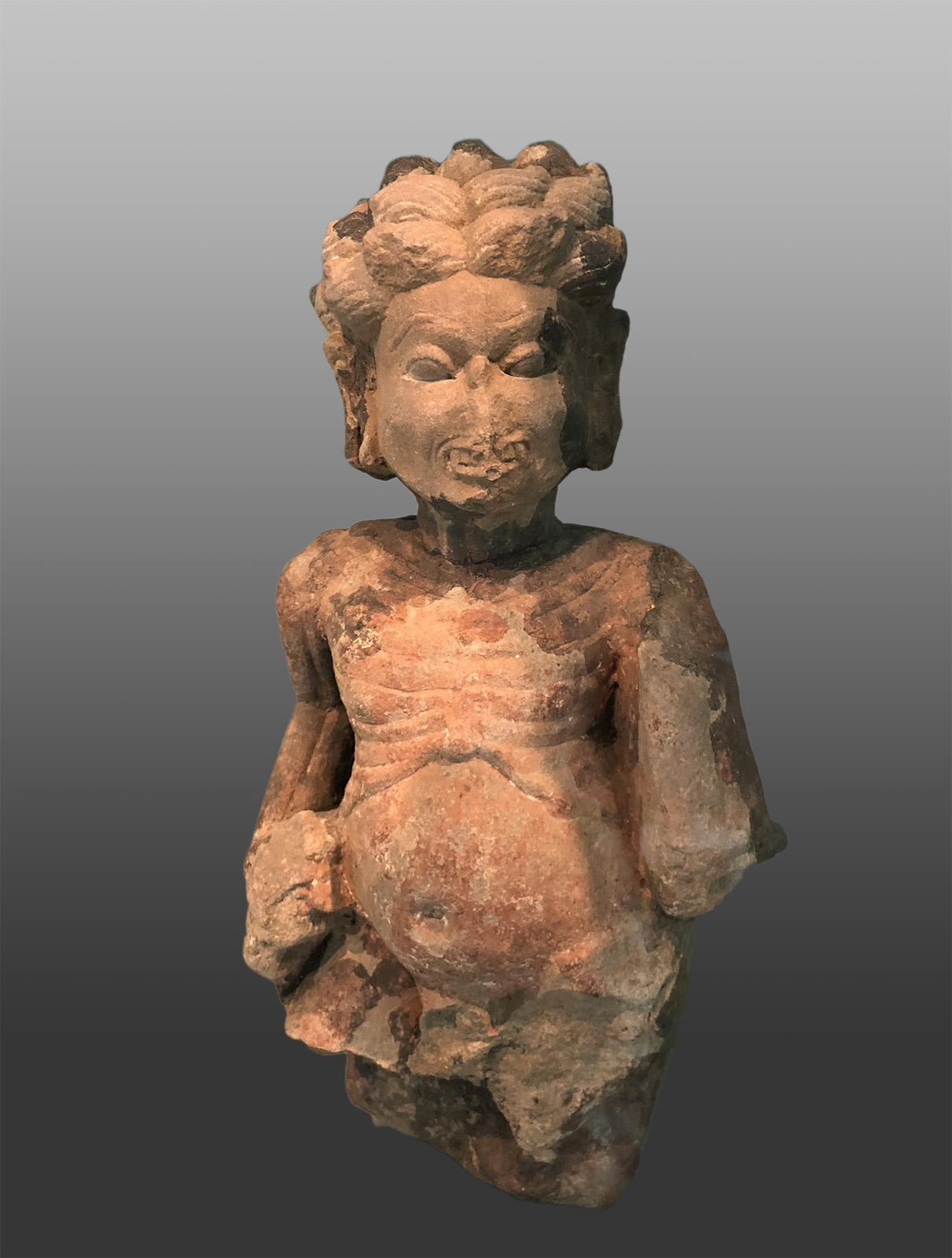 The tufted, uncombed hair, bulging eyes, fanged mouth, narrow neck, emaciated skeletal-chest but swollen belly are indicators that this is a hungry ghost (preta), scavenger of the cremation grounds. Envisioned most likely from direct observation of the effects of famine (where one’s empty belly swells as the rest of the skin clings to the skeleton), hungry ghosts are accorded their own realm of the six realms of rebirth as detailed in Buddhist texts and images. Greedy individuals in this lifetime are likely to be reborn in the realm of the hungry ghosts in their next lifetime where they will experience constant hunger and thirst, but will not be able to ever slake these cravings.

This poignant work is a fragment, part of a larger sculpture. Typically, this hungry ghost appears at the side of Avalokiteshvara, Bodhisattva of Compassion, who eases their pain. 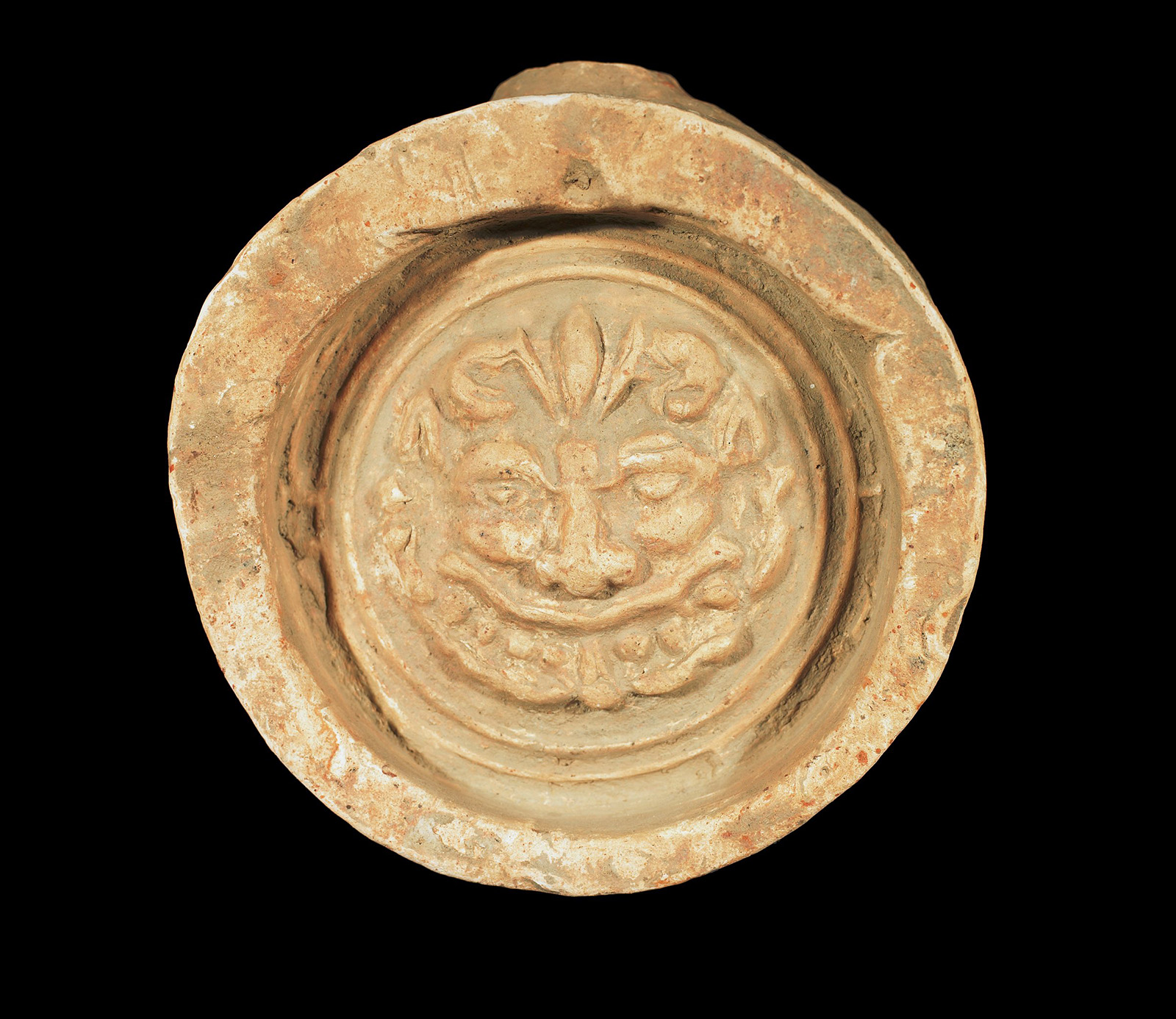 Like fighting fire with fire, fierce decorative faces (as seen here) were often stamped into the clay to protect the building and all it shelters from threatening unseen elements like harsh rain or snow storms, disease, or even physical or spiritual attacks by animals, man or demonic forces. In Vietnam, and throughout East Asia for more than 2,000 years, circular roof tiles like this one protect the end of sapling-sized timbers that support the roof. The timber ends are structurally the most vulnerable as they wick moisture into the wood inviting insect infestation and increasing how much they would expand and contract with heat and cold. Thus covering the ends of these beams is as important—or even more important—than covering the body of the sapling. Not only are stoneware ceramics waterproof—protecting the roof that shelters the interior—but also they insulate against both heat and cold.