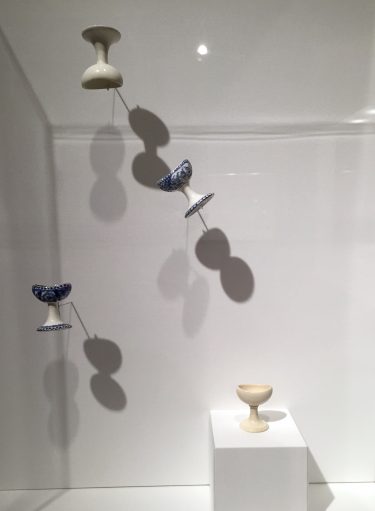 These small ceramic objects, called eye baths, were used as early as the 16th century as personal-cleansing aids and are still used today. In these cups, people mixed saline or boric acid with water, placed the cup with solution over the eye, and blinked several times to wash out road dust or other irritants. Eye baths came in a variety of materials in addition to ceramic, such as wood, gold, silver, and occasionally ivory.

These eye baths are some of the rarer objects in the Museum’s Wedgwood collection. Josiah Wedgwood began producing eye baths in the 1770s, probably influenced by his friend and personal physician, Dr. Erasmus Darwin, whose writings on human relationships placed great importance on the role of eyes. Two of these mid 19th-century eye baths feature transfer-printed decoration of birds and cabbage roses, while the other two are of unadorned creamware.

Comments from the gallery

Question: “How would you use an object like this in your life?”

Question: “What are the first three words that come to mind when you look at this object?”

And from a Museum visitor fluent in Doge: “Such art. Much small. So cups.”