In May, Terry Beckham retired as Head Exhibitions Designer after 34 years of service to the Birmingham Museum of Art. Terry has been a great asset to the Museum and is respected by those who know him for his curiosity, creativity, and eagerness to collaborate. His tireless devotion to his work has helped the Museum connect visitors to the experience, meaning, and joy of art. Terry was a key contributor in continually improving the presentation of our collection in the permanent galleries, and his style and design sense can be found everywhere in the building. We have enjoyed working with Terry for these many years, and he will be deeply missed. We’re excited to welcome him back soon as he joins the BMA Docent Program.

The field of exhibition design as a career is not very large, especially in the Southeast. Can you tell us how your interest in this job began?

Terry Beckham: My goal growing up was to be an artist or an astronaut. Being an artist won. I was able to tailor my education to maximize as much art instruction as I could get in public school which was not much. The real break for me came when I was accepted and attended Alabama School of Fine Arts; this was a total game changer for me. It showed me there were career paths in the art field that were available to me that I didn’t even know about, like museum work. I pursued an Art degree at the University of Alabama and graduated with a BFA. My intent was to take a year off before continuing my art education through the pursuit of a masters degree, with the goal of teaching on the college level. However, my path forked and I was led to exhibit design. After graduation, I moved back to Birmingham and began looking for work in an art-related field. Broke and needing some income while I searched for a job, I became a waiter instead. In less than two weeks on the job (I was horrible at it), I ran into a former professor who told me about a federal government-funded mural project that needed artists. I immediately applied and was hired. I worked with nine other artists and we painted large-scale public art in and around Birmingham for 18 months. It was fabulous! The mural project ended but the arts co-op that sponsored the project also ran an art gallery that rotated exhibitions monthly. I was hired as gallery director and artist-in-residence. This is where I got my feet wet designing and installing exhibits. The funds for this position expired, so once again I was looking for my next opportunity. Since I was out of work and still young, I began making plans to hike the Appalachian trail. At this point faith jumped in because two months before I planned to begin my AT hike, my former boss forwarded me a job announcement from the Huntsville Museum of Art for an exhibit designer / preparator. I had never even heard of an exhibit designer / preparator, but after reading the job description I knew I had all the skills they were looking for. I applied for the position mainly to gain some interview experience and, to my surprise, I was hired. I worked at the Huntsville Museum of Art for four years and gained valuable job experience. I totally fell in love with museum work and designing exhibits. I made the decision that my career path would be in museum work—besides, NASA never called me back about being an astronaut. The one thing lacking at the Huntsville museum was a permanent collection. I really wanted to work on exhibits that would be installed for years, not just months. This is what led me to a new job search and eventually to the Birmingham Museum of Art in August 1984. The BMA has been my home ever since.

The job of an exhibition designer includes everything from picking out gallery paint colors to creating the flow through a space. Which aspect of your work did you enjoy most?

TB: I’ll say without a doubt that picking out the gallery colors is by far the most difficult task I was charged with. I really sweated some bullets on that task many times! Not only did I have to be 100% sure about a color, but the curator of the exhibition I was working on had to be on board, too. Lots and lots of color tests happened to make those decisions. Creating the exhibition path or flow through the galleries was always fun; I enjoyed adding that surprise element that you would encounter when you rounded a corner or stepped into the gallery. Researching period architectural elements for exhibitions was always a pleasure, too, even though it was like walking a tightrope. I had to be very careful not to overpower the art with too many extra architectural details. 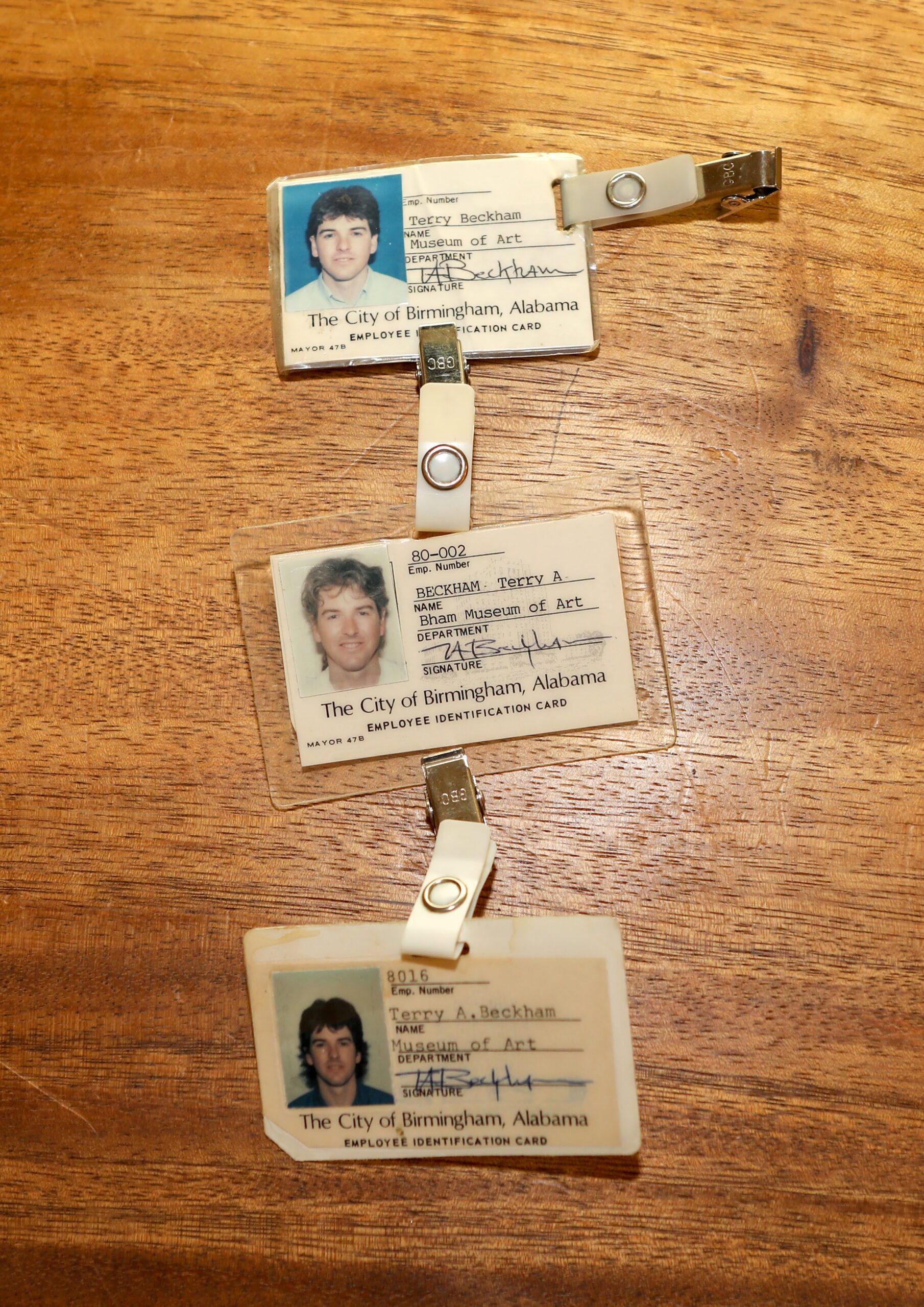 Since you started at the BMA in 1984, can you describe how the design and installation of Museum exhibitions has evolved?

TB: When I joined the BMA in 1984, I was a one-person department, so the exhibition design and installations were simple. I was making scale designs with paper models on graph paper. The BMA was at a turning point, growing in collection, staff, and facilities. My staff grew, and so did the complexity of the designs. I also began designing exhibits using computer design software, CAD, about this time. This was a real challenge because I had no previous computer training. I totally learned CAD by laying the manual in my lap and stumbling through the tutorials, plus a UAB special studies class on Mac. A big turning point with exhibit design came with the digital revolution. Where in the past the prep staff and I would hand paint all the exhibit graphics with the help of an overhead projector, now, design is a few clicks away from a photo mural or the exhibit title. It’s night and day by comparison. Another big change in the design and installation has been that the conservation of the objects or care of the art objects is now embedded in all of the exhibit planning, ensuring the collection will be around for future generations. That was a real learning curve, but through the use of conservation exhibit materials, it is now the norm.

After more than three decades, you have brought countless projects from ideation to completion. Of which project are you most proud?

TB: That’s like asking which of your children do you like best. I do have my favorites but there are hundreds that I also enjoyed working with very much. Top Choice #1 exhibition: Quin, The First Emperor of China. This exhibit put the BMA on the map! I think it still has the top attendance the Museum has ever had for an exhibit. The director of the Terracotta Warrior Museums was so impressed with my design that he had his curators track me down to ask me what I did to make the exhibit look and function so well. I was very flattered. I’m sure no one walked away from that exhibit unhappy. It was a pleasure to work on it from start to finish. Great team effort by the BMA. #2: The Armand Hammer Collection. This is the very first major exhibit I worked on not to long after I began working at the BMA. Fabulous artwork, very well attended, and I was very pleased with the design work and installation of the exhibit. This exhibit was in the old building before we renovated and we added new wood flooring to the galleries before the exhibit began only to have to refinish them afterwards because of the paths that were worn by the large attendance the exhibit experienced. #3: The Look of Love. Extremely challenging to design and plan for but in one of those “in the shower moments” I saw the complete exhibit in my mind. This exhibit may be the only one I designed that did not change too much from conception to completion. #4: Countless changing exhibits, too many to name, but I enjoyed working on all of them, Some more than others but it was all good. The last exhibit that was produced in the old building before the 1993 Museum renovation was That’s all Folks. This exhibition was about Warner Brothers cartoons: Bugs Bunny, Daffy Duck, Porky Pig, and the like. What made this design special was the fact that we would never use these galleries again before they were demolished for construction, so I cut loose with the design and basically recreated a cartoon look in all the galleries. We painted the wall in bright colors on odd angles, painted the floors and ceilings. Added Rabbit tracks on the floor. Just imagine all the images you see in a Warner Brothers cartoon and that’s what we did to the galleries. I wanted you to feel like you were walking in the cartoon and you did. It was so much fun. The Design work that I am most proud of is the BMA’s permanent collection galleries. This is the reason I moved to Birmingham and I feel the improvements that I have made in the BMA’s permanent collection galleries are a meaningful legacy to leave behind. If I have to single one permanent collection gallery out it would be three: the Chinese and the two Japanese art galleries. 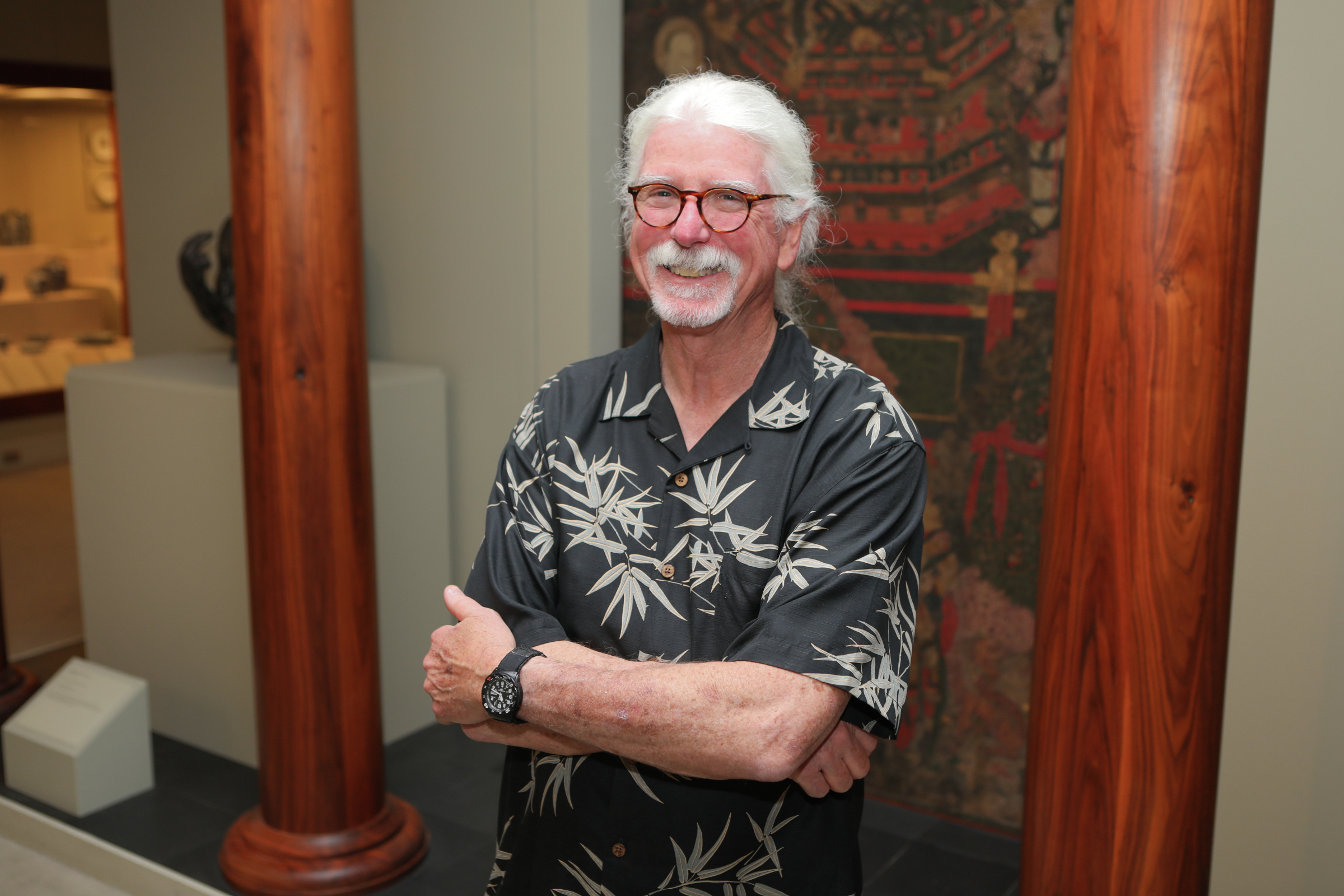 As busy as you’ve always been, we don’t expect you to slow down during retirement. What are some of your plans for the future?

TB: When I began thinking about retirement I started a list of things I wish to accomplish. That list grew to three pages long by the time I retired at the first of May. My list was full of the usual standard retirement things, like travel, spend more time with the grandkids and so on. My main goal is to make more of my art. It was my love of producing art that led me into this career path. I have spent the last 38 years of my life making other artists look good, so now it’s my turn. I plan to exhibit around town and I’m looking at showing at some regional exhibits. I have been involved in scouting for the last 31 years and have been the scoutmaster of Troop 93 for the last nine years. I plan to continue working with the scouts as long as I’m able. If you join my Troop I guarantee you will earn art and space exploration merit badges before you leave. I enjoy the outdoors, and working with the scouts guarantees that I’m camping out every month. Being outdoors is where I draw most of my inspiration for my artworks so scouting helps serve my need to create art as well.