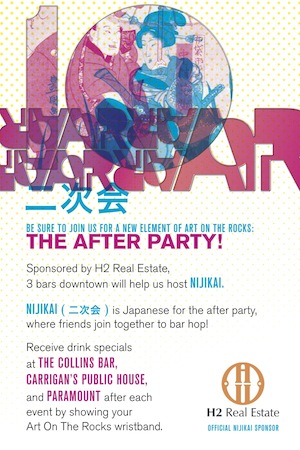 In the 10 years since Art On The Rocks began, downtown Birmingham has been transformed in a major revitalization movement made possible by dedicated business owners, developers, and citizens of the Birmingham metro area. In 2005, Art On The Rocks was one of the first downtown events in generations that encouraged young professionals to explore the many cultural opportunities the city offers.

“Art On The Rocks began as one of the first cultural events to bring thousands of young people back to the downtown area on a Friday night,” says Gail Andrews, R. Hugh Daniel Director of the Birmingham Museum of Art. “As we celebrate our 10th season, we’re thrilled to now be in the company such a vibrant downtown community.”

Recently, the giant influx of bars, restaurants, venues, and lofts downtown has steadily increased interest and enthusiasm for the city. Before, downtown Birmingham was primarily a place to come work and then go home; now, you can get off work and stay awhile.

“We believed when we opened Trattoria Centrale, we would have a built-in clientele with the local businesses being downtown,” says Geoff Lockert, owner of Trattoria Centrale, El Barrio, and Paramount. “El Barrio was not even in our original plan. With other developments on Second Avenue North, like Urban Standard, we thought we’d give it a shot. Now, I feel like I’m a part of something special. People can go downtown and have a complete evening all within walking distance. You can see some art, go to the park, have dinner, have coffee, and go to the bar. Years ago, this wouldn’t have been possible.”

With the revitalization movement, the Museum has made a great effort to collaborate with various downtown ventures by not only incorporating them as a part of the Art On The Rocks evening, but also partnering with them for our after parties. Join us in celebrating 10 years of Art On The Rocks and the exciting developments downtown during Nijikai. Sponsored by H2 Real Estate, Nijikai is Japanese for “the after party,” where friends join together to bar hop. Simply show your Art On The Rocks wristband after the event at Carrigan’s Public House, The Collins Bar, or Paramount to take advantage of drink specials and the best of downtown Birmingham!

By: Lindsey Christina, Art On The Rocks Intern