Curated by Dr. Emily Hanna, Senior Curator and Curator of the Arts of Africa and the Americas

The continent of Africa is home to some of the most spectacular wildlife on earth. Although people who grow up in African cities may never witness animals in the wild, rural communities surrounded by forest or savannah share a habitat with animals from the wilderness. The relationship between human beings and the natural world is foundational to many systems of African spiritual thought and practice. Encounters with non-domesticated animals are significant and spiritually interpreted. Many African proverbs refer to animals, and these verbal expressions of cultural wisdom serve as a reinforcing cross-reference to animal forms in African art.

If you are exploring this digital exhibition with kids, don’t forget to check out these printable coloring sheets! 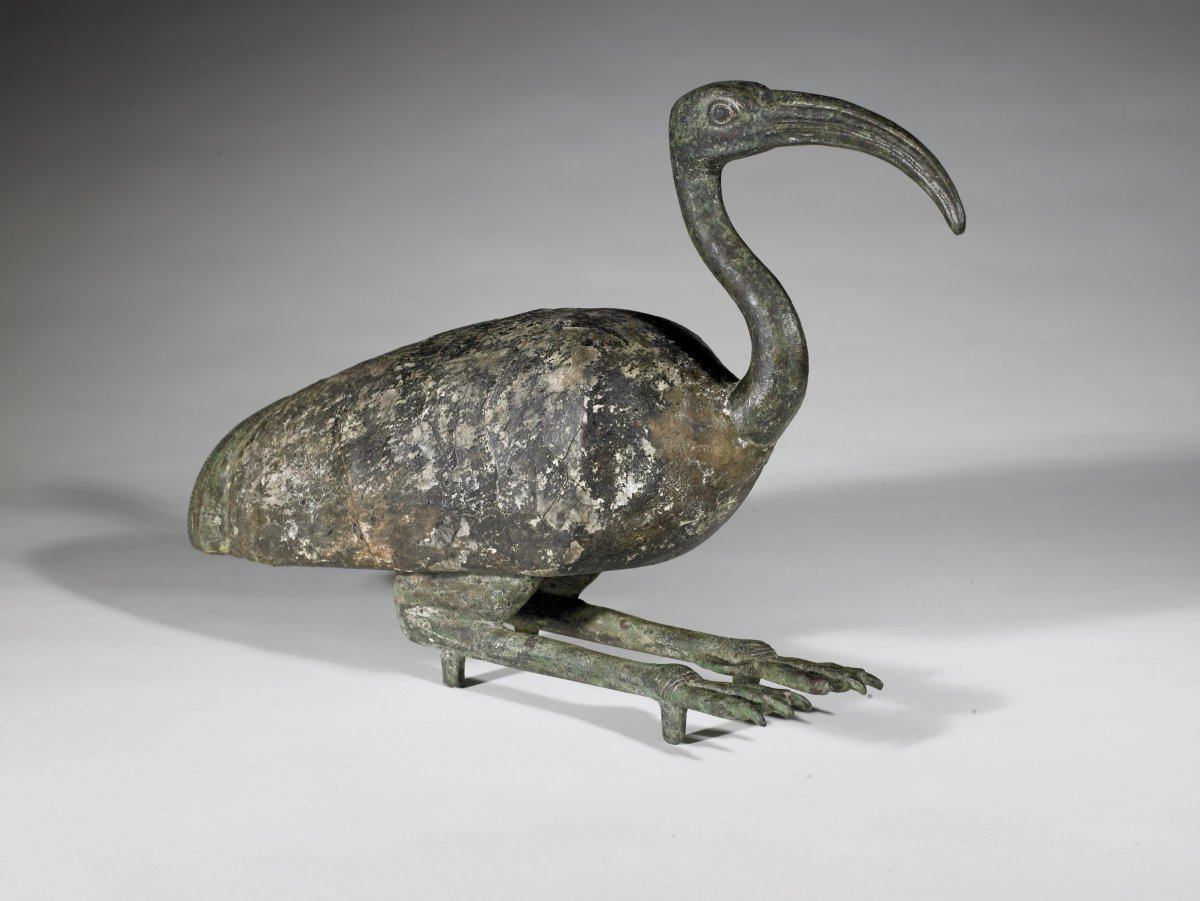 The Nile River is home to many creatures, including the Ibis. This wading bird was sacred to ancient Egyptians and was associated with Thoth, a powerful deity credited with the invention of writing, and linked to magic, science, and the moon. Thoth was the patron of scribes – writers in ancient Egypt – and in art the deity was depicted as an ibis-headed man, often holding a writing instrument. Ibises were often mummified and included in Egyptian burials. 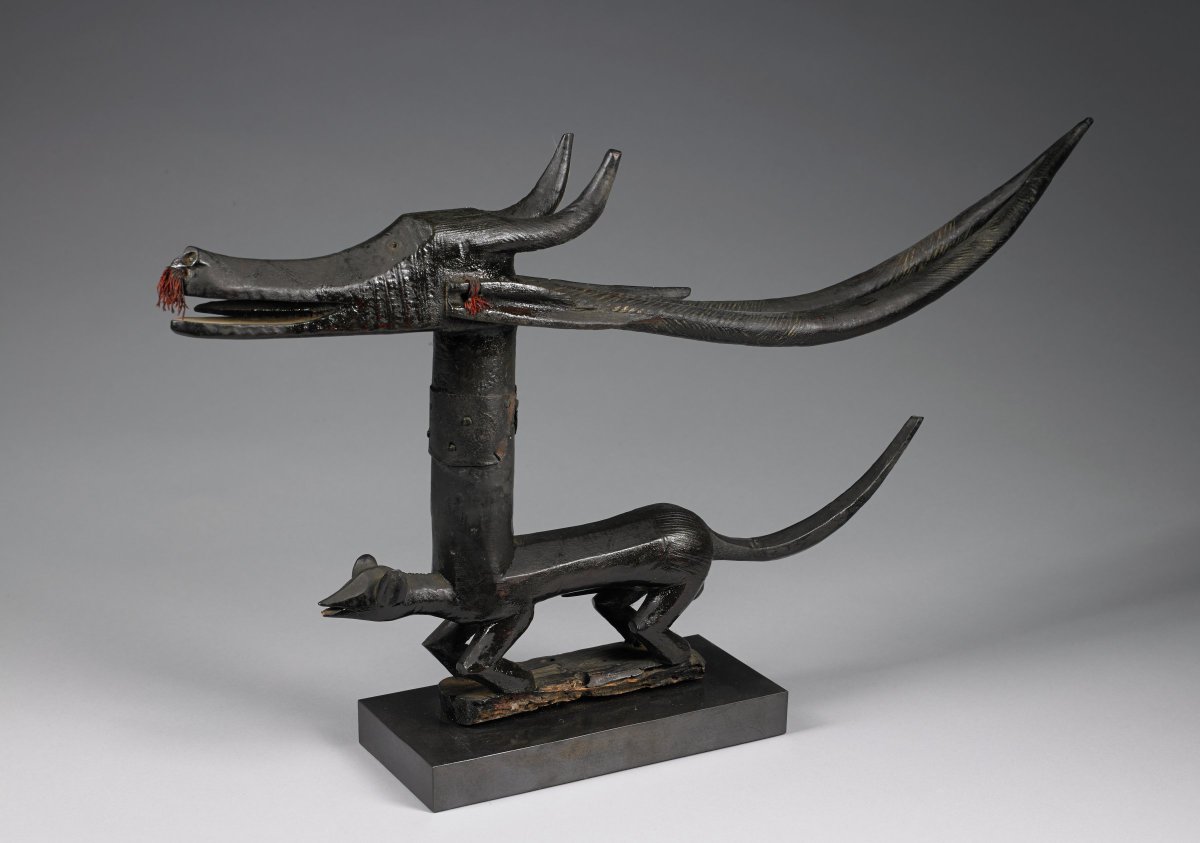 This headdress represents a divine being called Chi Wara who first taught the Bamana people how to farm. The Bamana live in Mali, an arid country in West Africa. A supernatural creature from the wilderness, Chi Wara is a composite of several animals, usually an antelope and an anteater. In rural, traditional Bamana culture, boys and girls go through several levels of initiation to learn how to be good community members and future spouses and parents. One level of education includes the mastery of agricultural skills, as well as the cooperation needed between men and women to plant, tend, and harvest fields according to spiritual laws. The Chi Wara ceremony occurs at important points in the agricultural cycle, and the dancers always appear in male-female pairs. 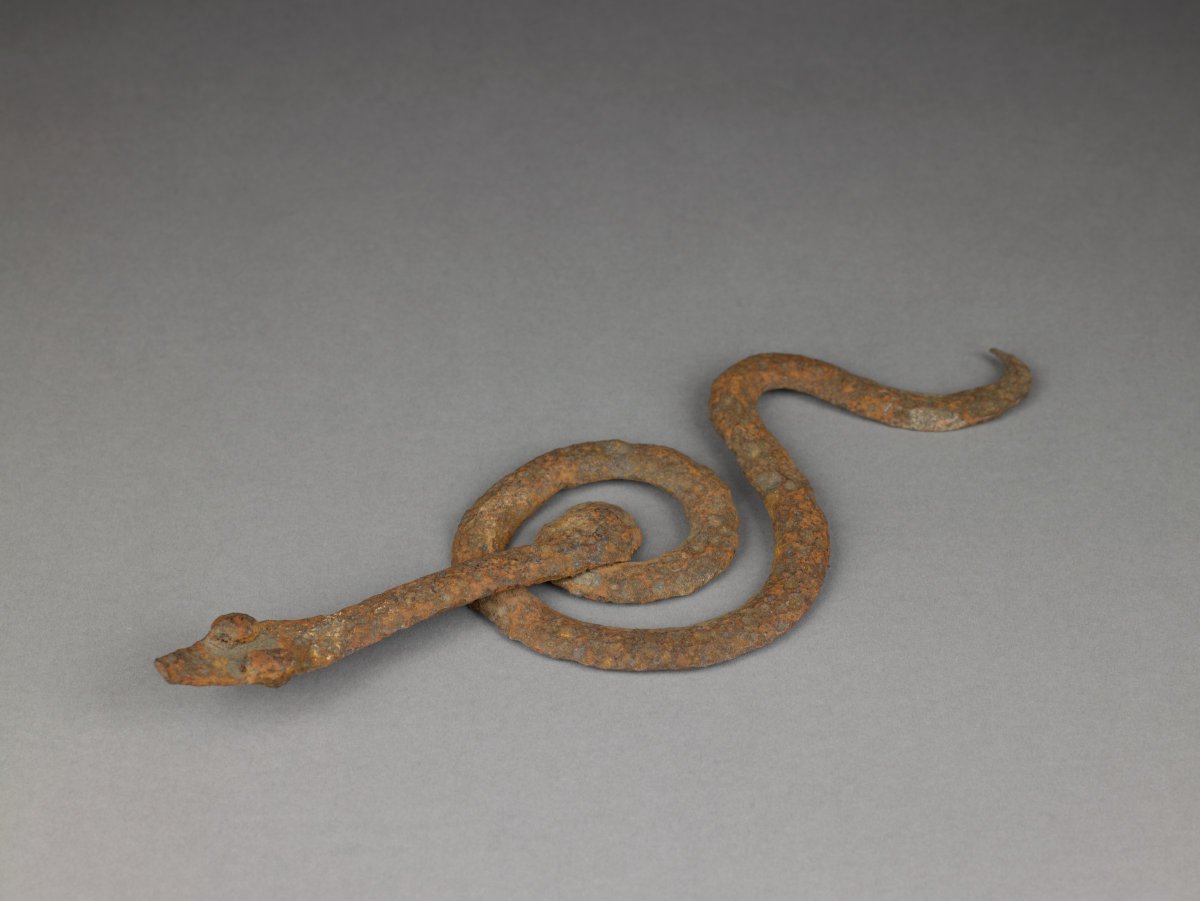 Snakes are represented in art across the continent of Africa. They are often considered primordial animals – present since the dawn of time – and are important to many creation stories. They are often considered messengers, or links between the visible and invisible worlds. The shedding of their skins is linked to the capacity to transform. The Gan and neighboring Lobi people of Burkina Faso place iron snakes such as this on family shrines to serve as points of connection between the living and their ancestors. 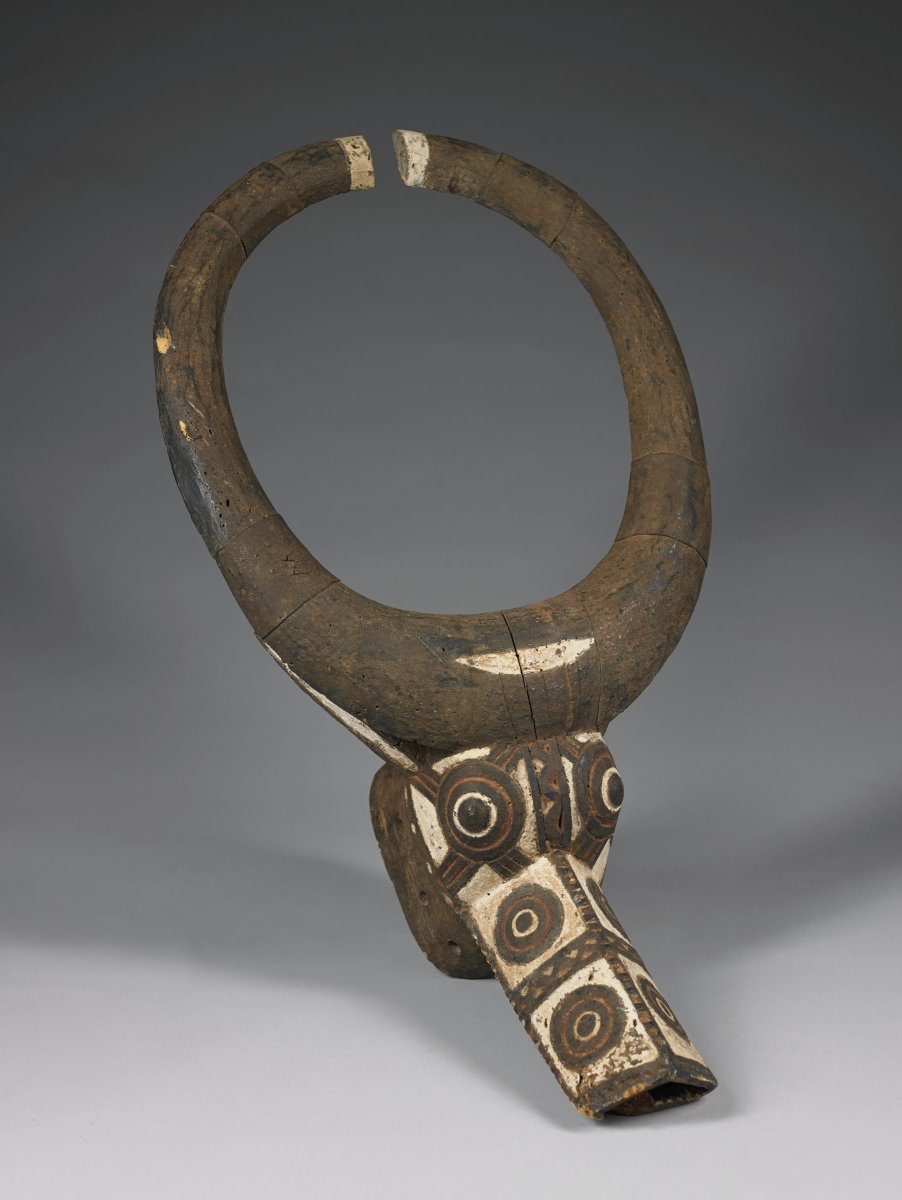 Among the Bwa and Nuna people – neighboring groups living in Burkina Faso, West Africa – spectacular masquerades are performed for initiation ceremonies, funerals, and to mark the beginning of the rainy season. The buffalo is an unpredictable, powerful animal, and can charge, causing injury or death. Its horns are weapons and are to be respected. A West African proverb states “one hand does not catch a buffalo,” alluding to the animal’s power, but also the cooperation needed to manage a dangerous, erratic force. Animal masks embody the characteristics of particular animals, but also allow for a consideration of human behaviors – those that are desirable, and those to be avoided. 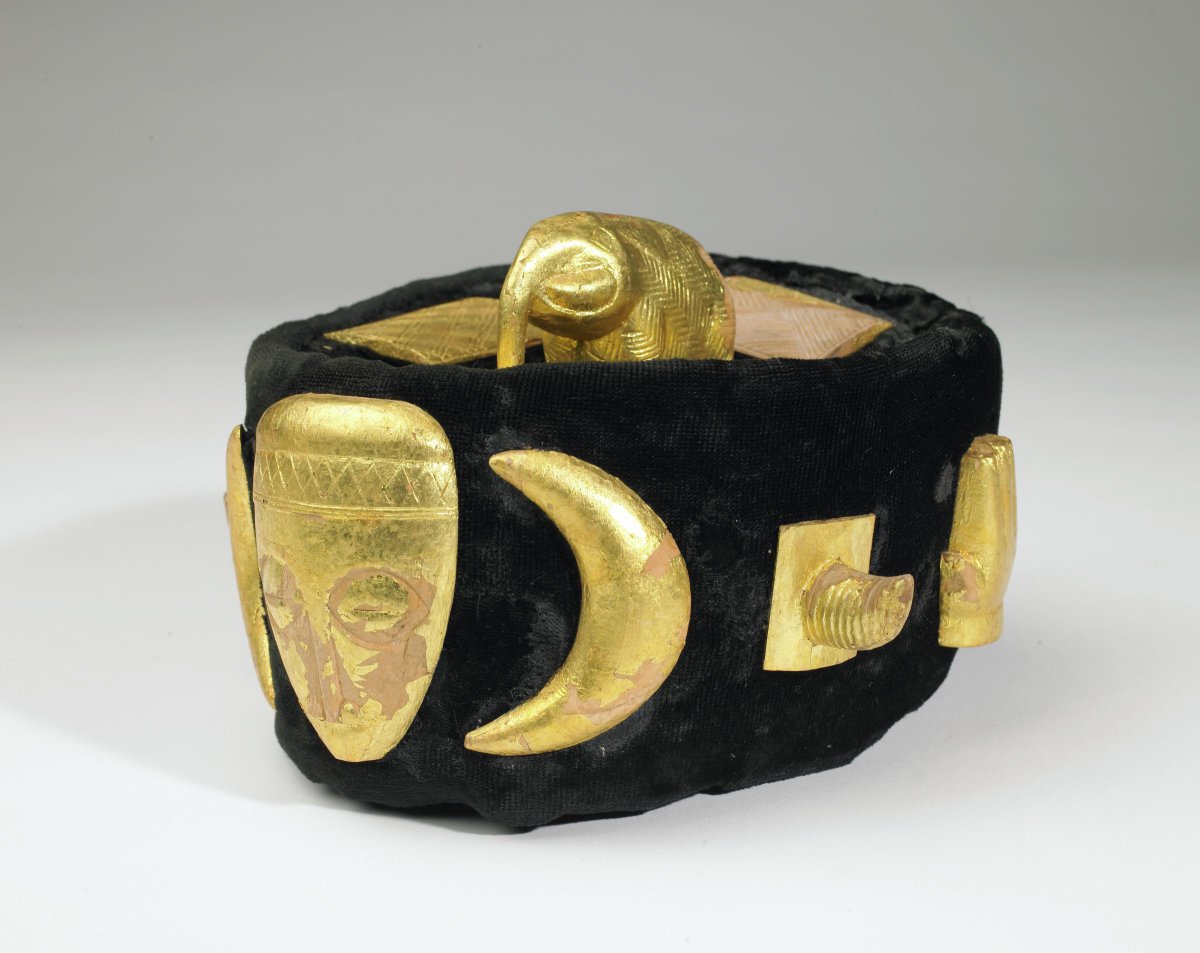 This crown would have been worn by a chief of the Baule people of Ivory Coast. The emblems covered in gold leaf all have symbolic meaning. An elephant sits on top of the crown, literally at the crown of the wearer’s head. The chief’s power and authority was likened to that of the elephant – the most powerful animal in the Baule environment. There are many proverbs about the elephant’s power, including:

Only the elephant can uproot the palm tree
When an elephant steps on a trap, it doesn’t spring
When elephants fight, it’s the grass that suffers
If there were no elephants in the jungle, the buffalo would be big 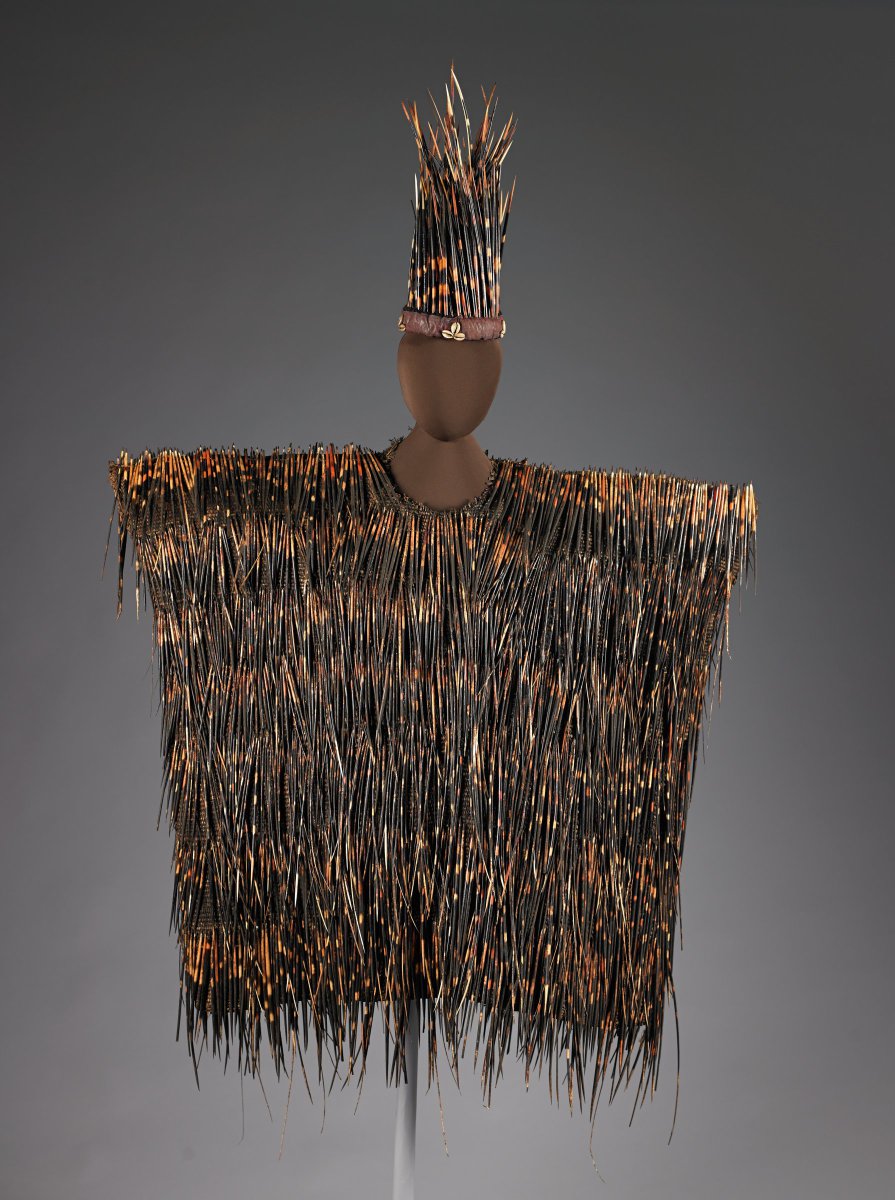 Traditional African leadership regalia frequently incorporates references to powerful animals. This can include fur, horns, claws, and teeth, to name a few. These visual references remind the community of the leader’s power, and his or her relationship to power in other realms. This woven shirt and hat are covered in long, sharp porcupine quills. The Cameroonian leader wearing such an ensemble is making a clear statement about his or her personal power, but also the power to defend the community.