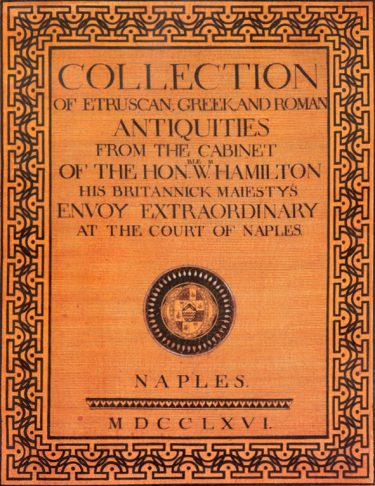 Etruscan, Greek, and Roman Antiquities from the Cabinet of the Honble William Hamilton, Baron Pierre d’Hancarville, 1766-1767

What is the value in collecting vases? In 1772, Sir William Hamilton sold his collection of  Greek vases and other antiquities to the British Museum for £8140. However, monetary value was the least of ambitions for Hamilton: he sought to document his collection in great detail. The so-called Hamilton Folios were not only the most precise and comprehensive documentation of its kind, but they also paved the way for artistic and cultural tastes in Europe.

When Hamilton arrived in Naples as the British ambassador in 1764, he feverishly began collecting antique vases, a common hobby among Neapolitan scholars, artists, and courtiers. He acquired many directly from archaeological excavations – such as those ongoing at Pompeii and Herculaneum – rather than dealers. The Etruscan and Greco-Roman origins of these artifacts coincided with the formation of patriotic identity in Italy.

Hamilton believed the folios should provide theoretical principles of classical art, supported by examples. He meticulously and systematically documented his collection, noting the variety of forms, styles, and painted ornamentation. His drawings and paintings showed different views and sections, and he included detailed analysis of the vases’ inscriptions and imagery.

In addition to scholarship, Hamilton intended the folios as didactic tools, “useful to Artists, to Men of Letters and by their means to the Word in General,” as described in Hancarville’s preface to the first volume. Indeed, by the end of the 18th century, ancient vases, coins, mosaics, reliefs, and manuscripts appeared regularly in Neoclassical paintings. The folios served particularly well as a pattern book for ceramic manufacturing, specifically for Josiah Wedgwood. Hamilton sent the first prints to Wedgwood, who developed new production techniques with black basalt and encaustic painting to imitate the Etruscan paintings’ black and red-ochre color scheme. Not only were Wedgwood’s craft qualities at the forefront of pottery production, but his marketing techniques enticed Europeans to buy vases and art in the Etruscan style.

See it for yourself!

Modern edition in the Museum’s Hanson Library: D’Hancarville, Pierre. The Collection of Antiquities from the Cabinet of Sir William Hamilton. Köln: Taschen, 2004.

How does one culture’s art influence other cultures throughout history? Visit the links below to learn more about Hamilton’s folios, the Etruscan style, and how the classical world has shaped our world today.