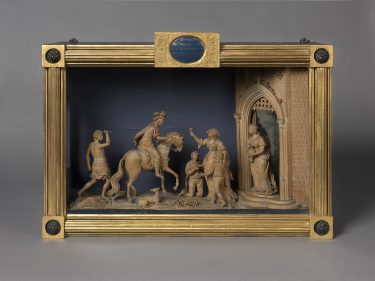 A rare and important work has entered the Museum’s collection. The Murder of King Edward the Martyr at Corfe Castle is one of just three sculptures known by the artist Robert Carpenter (1752-1829), who was born in London, but by 1798 had moved to Bath. The subject dates to 978, when King Edward’s jealous stepmother had him killed so that her own son could ascend to the throne. As the king approaches the walled gate of Corfe Castle on horseback and leans to accept a drink, the assassin appears with a knife.

The scene is exquisitely carved from limewood (also known as linden wood). This soft wood allowed Carpenter to minutely render the scene in great detail. The artist beautifully framed the figural tableau in a shadow box, and signed and dated it on the back. Also on the back is an inscription with thename of Carpenter’s two daughters, identifying the work as a “gift of their beloved father.”

Beginning in early September, The Murder of King Edward the Martyr at Corfe Castle will be on display in the English Gallery.