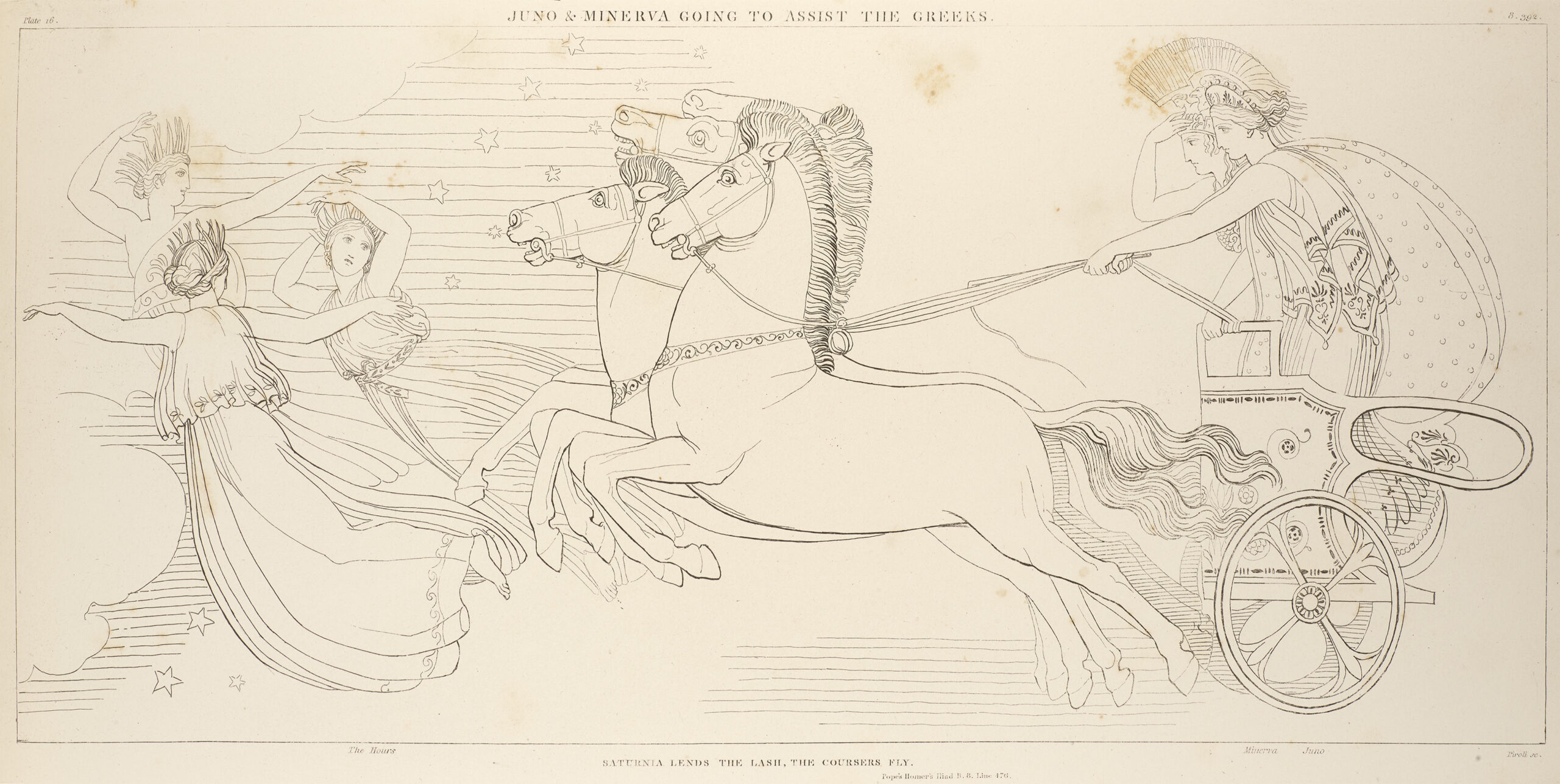 Visitors to the Birmingham Museum of Art may not know that the Museum staff, docents, and community members are supported by a robust library collection. Thanks to thoughtful acquisition practices and very generous donations, our Rare Books Room includes objects that would not be out of place sharing space with the works in our galleries. A donation to the BMA library from the late Wedgwood and ceramics enthusiast and champion Bernard E. Starr deserves recognition as an exemplary documentation of Wedgwood history. We are honored to house this thoughtful assemblage of materials.

As part of the donation, we were privileged to receive copies of the Iliad and Odyssey, illustrated by John Flaxman. John Flaxman (6 July 1755 – 7 December 1826), aside from his renown as a neoclassical sculptor, may be best known for his employ with the Wedgwood pottery manufactory. Flaxman began designing jasper ware plaques and vases for Wedgwood and Bentley in 1775, drawing on designs from classical antiquity. In the BMA Wedgwood collection, you can see examples of Flaxman’s modeling in the jasper tablet Five Muses and in the large Apotheosis of Homer, or Pegasus vase.

Flaxman traveled to Italy in late 1787 to study classical, medieval, and renaissance art, as did many English artists of the time. Though the intention was to stay for two years, Flaxman and his wife, Anne Denman, stayed in Italy until 1794. During this time in Italy, Flaxman, who was well read in Greek and Latin literature, produced drawings based on Homer’s Iliad and Odyssey, which were both published in 1793. In 1804, a new edition of both titles was published by Longman, Hurst, Rees & Orme. To this new edition, Flaxman added six new designs for the Odyssey and five new designs for the Iliad. Flaxman’s drawings for this edition were engraved by William Blake and others. It is this edition that the BMA library is proud to own, thanks to the gracious donation of the Starr family.

The two volumes contain a total of 73 plates, 39 from the Iliad and 34 from the Odyssey. Flaxman was likely the first artist to create images specifically for print publication in pure outline. In these simple outlines, Flaxman consciously chose a classical linear style, perhaps in an attempt to reinvigorate what had become a conventional genre. Indeed, his drawings were met with positive acclaim. Many artists gathered inspiration from the drawings including David, Géricault, and Ingres. Though widely lauded, Flaxman’s illustrations also drew some derision. Some found fault with varied line weights. Others commented that his style was borrowed, unoriginal, and too simple.

The invitation to view the 1804 editions of Flaxman’s Iliad and Odyssey is open for those who would like to form their own opinions. Though not a lending library, the BMA Clarence B. Hanson library is open for on-site research where you’ll find the Flaxman volumes keeping company with many varied treasures.