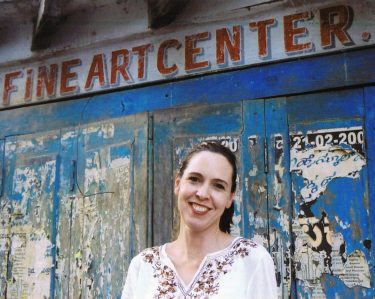 On March 5 at 6PM, the Museum is excited to welcome Dr. Cathleen Cummings to present the Callahan Lecture, where she will discuss India’s post-Partition identity and the cinematic image. Dr. Cummings is an Associate Professor of Art History at The University of Alabama at Birmingham who specializes in South Asian art. Read along to learn more about Dr. Cummings, her work, and what she will discuss at the lecture:

Birmingham Museum of Art: How did you become interested in South Asian art? How has the time you’ve spent in India influenced your interest in and study of the country?

Cathleen Cummings: I was first introduced to South Asian art as an undergraduate at Mills College, in Oakland, California. I took my first art history class in my freshman year, really just to complete one of my core requirements, but found it to be fascinating. I think the first specifically South Asian class was in my junior year – a course on Rajput painting, which is so vivid, arresting, and beautiful. In the second semester of that year I did a study-abroad program in London and at the end of it, I decided to do some traveling. So I went on a tour to northern India and Kashmir. It was amazing!

Since then I have traveled in India so many times. What continues to amaze me is how many incredible architectural sites that have not received any attention from scholars or conservators— places that no one but the immediate locals know anything about. There are many forgotten but important temple traditions across India, especially from after about the year 1500, that are not a part of any tourist program. There is still so much to see and do!

CC: There are many, many reasons for this but I’ll try to pinpoint just a few.

First, as early as 1909, the British created administrative units in India based upon religious identities rather than geographic boundaries, linguistic spread, or other factors. The British not only defined society according to religious belief but suggested that each community had to be protected from the others. Both the division of the population based upon religious category, and the notion that the individual communities were a danger to each other set up the dangerous construct that resulted in Partition violence. In 1919, for example, the British organized separate elections for Muslims and Hindus in Bengal. In Bengal in particular, cultural unity on the basis of a shared language was undone through the introduction of religious nationalism.

Second, partition had already been tried by the British—on a more limited scale, that of the province of Bengal—and failed disastrously. The division of Bengal in 1905 was promoted for administrative reasons: Bengal was as large as France but with a significantly larger population, and it was felt that the eastern part of the region was neglected. It was thought that by splitting the province, an improved administration could be established in the east and the population there would benefit from new schools and employment opportunities. In reality, though, other motives were behind this partition plan. Bengali Hindus were in the forefront of political agitation for greater participation in governance; but with the partition of the province, their position would be weakened, since Muslims would now dominate in the east. As a result of the partition of Bengal, there was an almost national anti-British movement that involved both non-violent and violent protests. The two parts of Bengal eventually were reunited in 1911.

Third, although partition had been discussed for many, many years, the actual decision to divide British India into the two states of India and Pakistan was announced by the British only on June 3, 1947—which was to be just two months before the date of independence on August 15, 1947. According to the British partition plan, a boundary commission was to be set up to determine the borders of the new nations, a difficult task. The boundary commission report was prepared by a London lawyer, Sir Cyril Radcliffe, who had never been to South Asia. Unfortunately, the commission took so long to decide on a final boundary that the two nations were granted their independence before there was a defined boundary between them.

Neither the British, the Congress Party, nor the Muslim League anticipated the degree of communal violence and migration that went along with independence. The failure of the administrative machinery to anticipate such violence is one of the major reasons why mass bloodbaths continued for weeks.

The British had initially announced that it would grant independence to India by June 1948, at the latest. Given the rushed nature by which India and Pakistan’s borders were decided, I can’t help but wonder if the partition might have been less bloody and destructive had independence been pushed back a few months at least, into 1948.

BMA: Following the Partition, the Golden Age of Indian cinema was born. What impact did the films have on Indian society when they were first released, particularly amid such recent tragedy?

CC: The films of the Nehru era – the 1950s and into the early 1960s – played a very important role in the creation of a sense of national unity in the years after independence, and in the formation of an overarching, authentic national identity. Prime Minister Nehru believed in the idea of an abstract, historical “Indian people” and this idea dominated much of the public creation of Indian national identity. Versions of classical music and dance participated in this, and they became key features of what becomes known as the Bollywood “masala” film. Films played a key role in creating this sense of a singular, unified nation and people, especially by focusing on the rural, village “everyman” and “everywoman” as hero or heroine, and by creating a vision of a new, modern, secular, industrial India that was severed from the shackles of the past. At the time of independence, India was only 18% literate, so cinema was able to reach the masses in a way that other media could not. Few films were overtly political, but an optimistic and hopeful attitude about the future prevailed.

BMA: If you had to choose from one film that you’ll discuss in your lecture, which one is your favorite? Why?

CC: This is a very difficult question! I am only briefly going to mention Guru Dutt’s 1957 film Pyaasa, but it is one of my favorites. The film deals with the romantic but unsuccessful poet, Vijay, who makes certain choices in the face of the cynicism and exploitation of modern Calcutta. The film is an incredibly beautiful statement about disillusionment with the post-colonial state and the struggle of a sensitive individual against the materialism of the world around him. The song sequence, “Yeh kooche, yeh neelam ghar dilkashi ke,” is incredibly poignant and unlike any other in Hindi commercial cinema.