“A painting for me, speaks by itself;
what good does it do, after all to impart explanations?
A painter has only one language.” – Pablo Picasso

Artists have expressed a range of sentiments about naming or titling their works of art. Some artists even question if there should be a title altogether. I Spy presents an experience that travels the spectrum between the two opposite views about art titles. It is an exercise on how we can bring the two together with some conscious looking. The selected works can engage YOU, the viewer, in a game of intentional “hide-and-seek.” These works invite us to use our imagination, creativity, and personal experience coupled with the artist’s intentions.

Please consider giving these works of art a longer engaging glance, a searching gaze, and even a mesmerizing stare to fully comprehend the meaning and emotions behind art.

This visual game begins with a relatively easy and yet so engaging I-Spy. Can you find the birds and flowers mentioned in the descriptive title*? On this beautiful Chinese folding fan, the artist intricately paints an almost invisible pair of birds. The prominent colors of the cherry blossoms, leaves and the tree branch contrast the pair of birds who are almost transparent. Originally, the eye is directed to the green of the leaves, brown of the branch and small specks of pink and red. The artist’s inscription even pops out of the painting. But the eye searches for the “Birds” mentioned in the title. They are almost hidden in plain sight.

Artist’s Inscription (on left):
In early autumn of the year of wuyin (1818), done in the style of Yun Dongyuan (Yun Ge, 1633-1690). Sketched by Wuyang sanren Guangsheng.
戊寅孟秋擬惲東園法五羊散人觀生写

*Majority of historic Asian works of art are not titled. Like many other caretakers of historic art, this descriptive title was assigned by the curator. 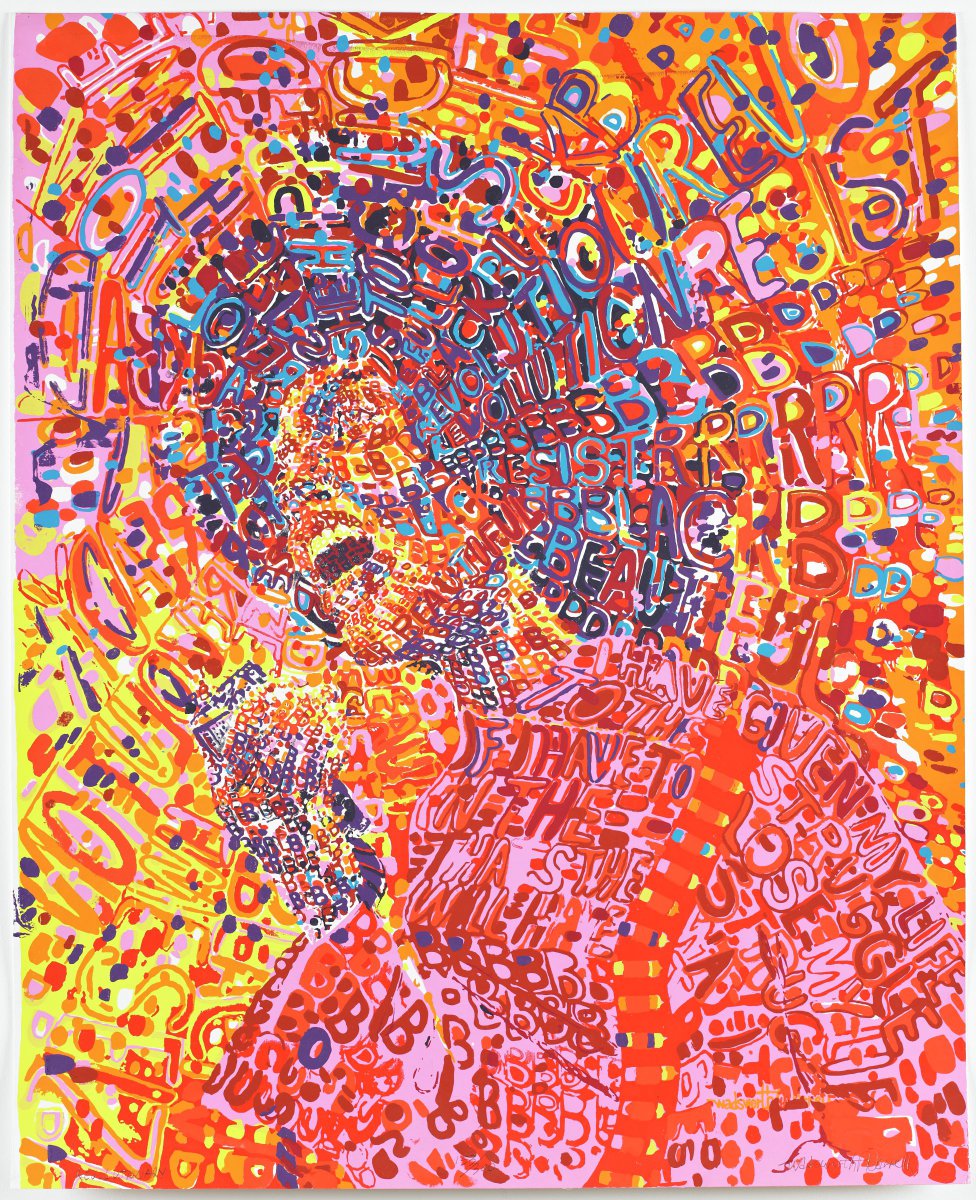 Can you find the words REVOLUTION, RESIST, BLACK, BEAUTIFUL, AND STRUGGLE in this print? These are words excerpted from the speeches of the woman portrayed, Angela Davis. They also are part of the suit she is wearing that was designed by Jae Jarrell, a famous designer in her own right as well as the wife of the artist.

Wadsworth A. Jarrell Sr. is a famous Southern social artist from Georgia. This print is an ode to two: both women, Angela Davis and Jae Jarrell. Davis was a prominent figure in the South as a political activist, educator, and writer who became an international public figure during the Civil Rights Movement of the late 1960s and early 1970s. Davis was arrested in 1970 for alleged involvement in the death of a prison guard, and her imprisonment and trial generated international attention and protest. The dress she is portrayed wearing was designed by Jae Jarrell, famous designer and wife of the artist. Although Davis never wore Jae Jarrell’s suit, it was named the “Revolutionary Suit.” In the print the suit is made up of words saying: I HAVE GIVEN MY LIFE TO THE STRUGGLE. IF I HAVE TO LOSE MYSELF IN THE STRUGGLE, THAT IS THE WAY IT WILL HAVE TO BE.

The print artist, Jarell Sr. has broadcast to his viewers what he wants us to see. Although not easy to read, he creates an interesting and rewarding game of close and conscientious looking. 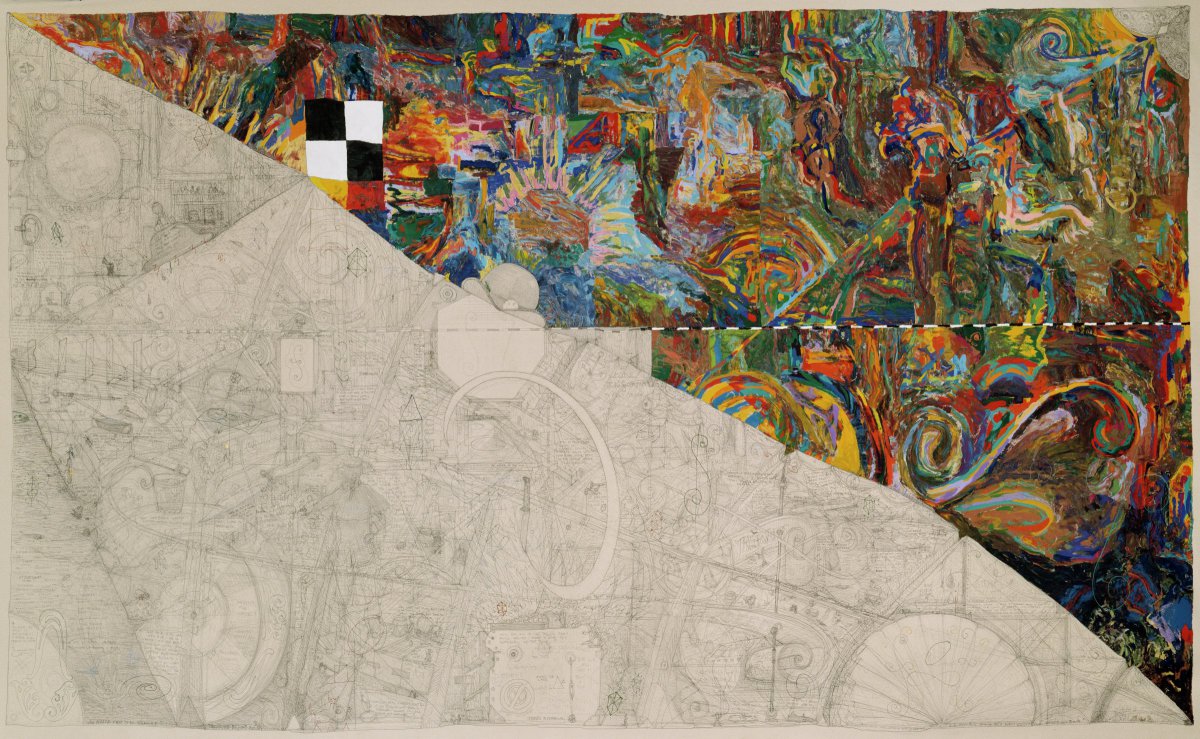 Famous for incorporating sketched, painted, and annotated elements, Willam T. Wiley’s work is a visual representation of a state of mind. It elaborates order amidst chaos. Here, he created a stark diagonal division of the canvas where the lower half has imagery drawn in pencil. He created a vast network of illustrations, notes, and visual puns, along with symbols that were significant to his life. The upper right corner is a celebration of painterly expressionism through vivid colors and abstract allegory. Together they send the viewer into an intense game of seeing, finding, and relating meaning in his art.

In the artist’s own words, he referred to his life’s work as an “archaeological site.” Like archeology, in order to discover, one has to dig deeper, slowly investing time and care. As per his wish, if we are to give his work time, it will talk to us and the greater we understand the more we will be tempted to uncover. This Is even truer for the Remedial Archaeology and the Like, where we are invited to play this intense observation game with the internal workings of the artist’s mind.

Image Credit:
Remedial Archaeology and the Like
William T. Wiley
Museum purchase with funds provided by the National Endowment for the Arts, a federal agency, and the Museum Store 1988.50.1 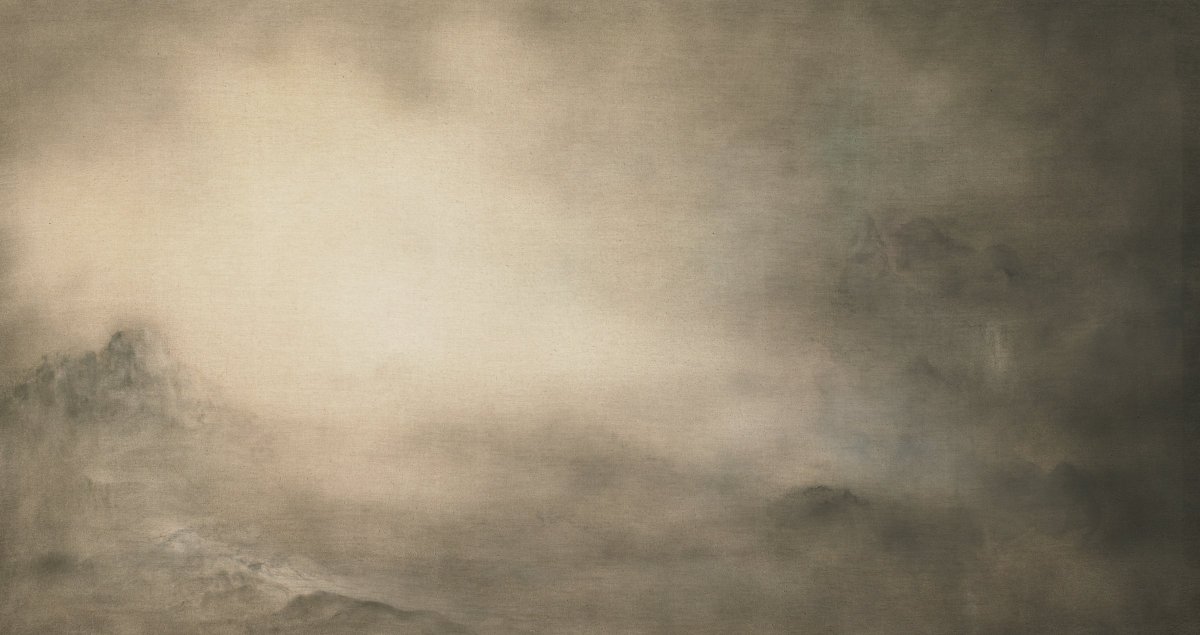 In this very spiritual rendition of a landscape, Michael Biberstein allows us to engage in neither a particular landscape nor a place, but an emotional experience. He has spoken about his paintings as reflections of inner landscapes that are constantly changing, moving and evolving. He highlights this intense idea through subtle movement of colors that transform the canvas into a visual performance. The chromatic movement on the canvas surface is mirrored by that of the viewer’s eye as he tries to follow and absorb the rhythm of this work.

Biberstein spent a major portion of his life studying and creating these powerfully moving pieces. A journey that started from larger-than-life compositions inspired from Baroque landscapes, led to this broader study of the vast skies that lie above many landscapes. Each of his numerous renditions, is vastly different from the previous one, highlighting the ever-changing skies through clouds, light and air.

The game of trying to locate a certain aspect gets quickly left behind, as the viewing eye tries to engulf the artwork in its entirety. He leaves you in a mesmerizing experience of staring at his landscape and over time, seeing hints of the yellow, blue and red. 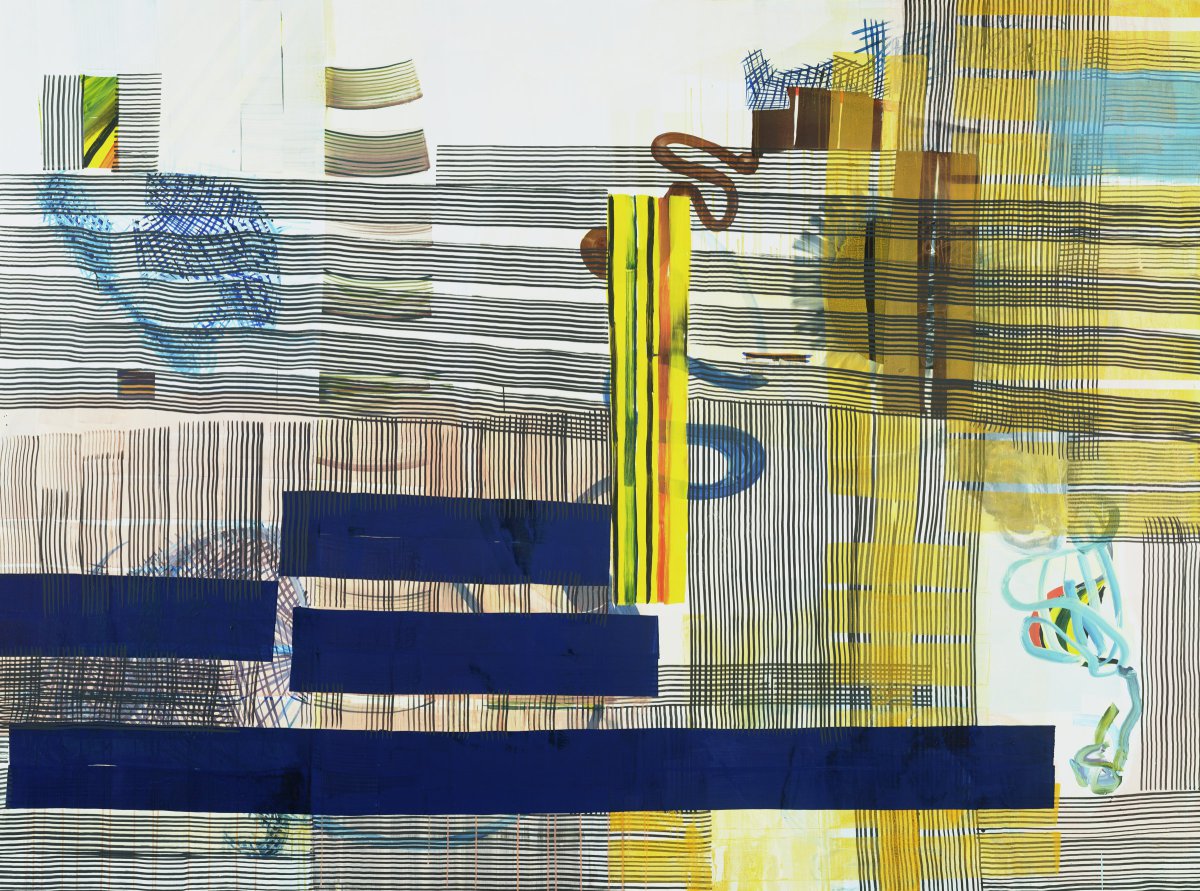 Uslé employs titles to convey a mental point of departure for his work. Sometimes he deliberately chooses motifs that question the relation between the image and its referent, almost reeling a person into a conversation with intrigue. He has stated, “Our minds and bodies need to actively participate in the experience of contemplating a work, it demands your total attention and a particular kind of effort—it’s almost a commitment.”

Here he encourages the viewer to explore the abstraction of a ‘rumor,’ in a very real physical place, a ‘garden.’ Resulting in a dialogue between objective reality and its subjective experience. Here, like all of his work, he wants his work to be viewed as an area of dialogue.

In a game where we set out to find something he spied, Uslé engages us in an in-depth exchange of abstract ideas. 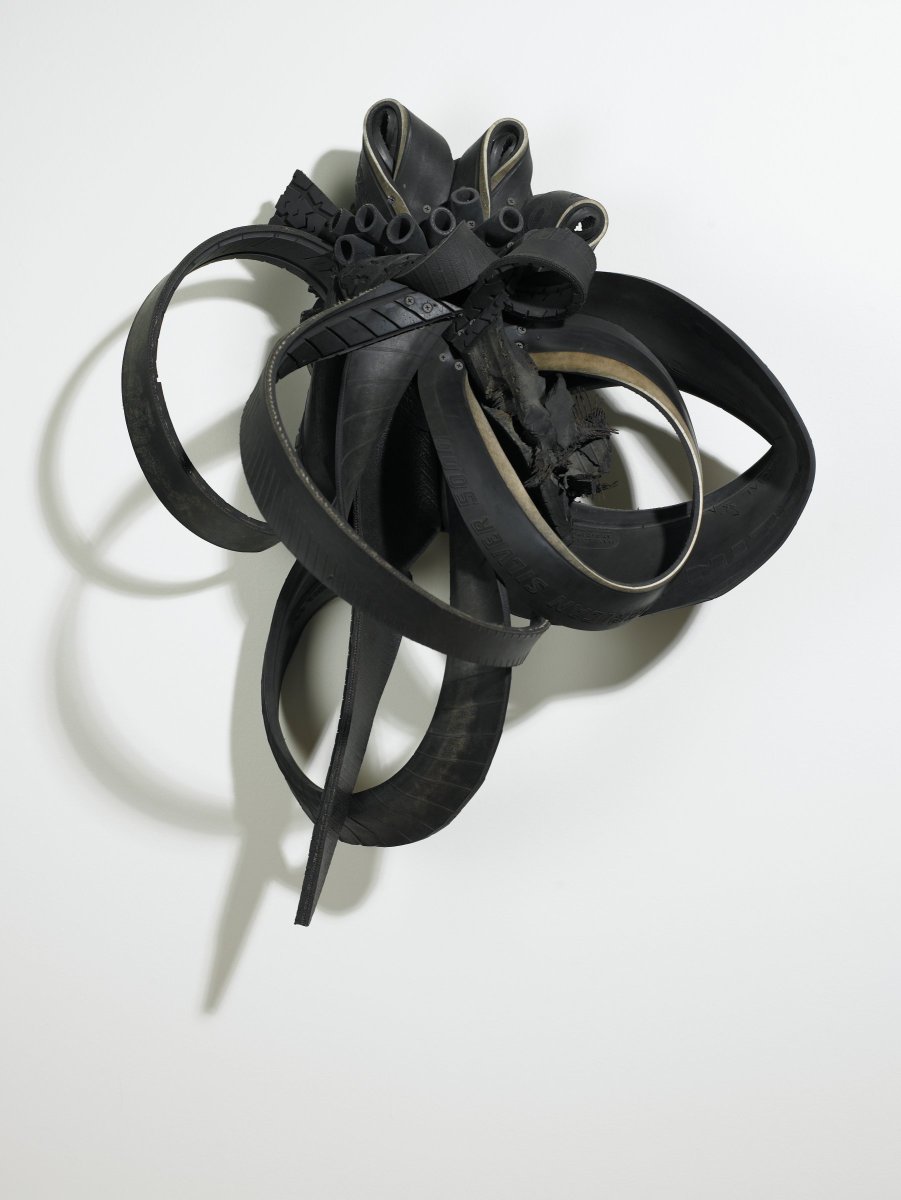 Chakaia Booker repurposes and reuses tires in her sculptures creating beauty from atypical materials. Each of her works is different and speaks to variety issues close to her heart, including the environment, struggles of women, the physical world of industries and communication as well as slavery and the African American experience.

Booker thinks art should dialog with its viewer. She wants viewers to decide what they are seeing. Although she gives titles to her works, she does not define value or expectations for the viewer. It is for the viewers to arrive at their own conclusions. Perhaps seeing physical definitions, from large assemblages of black rubber and metal.

This sculpture is a game-changer in the game of careful looking. There are suddenly no rules and viewers are free to interpret It’s Like This any way their mind comprehends and heart desires.

Image Credit:
It’s Like This
Chakaia Booker
Gift of Ellen and Fred Elsas 2003.47