The Origin of Tea

Tea was first discovered around 2700 BCE in China, and has many origin stories. One claims that divine farmer Shennong was looking for edible berries and grains when he accidentally poisoned himself. Before he died, a tea leaf flew into his mouth and as he chewed it, he regained his strength. Although tea cannot reverse poisoning, consuming tea for medicinal purposes became popular. Tea was not regularly drunk for enjoyment until the 3rd century CE. This is when the cultivation of tea began.

Up until the 17th century, only green tea was consumed. During the late Ming Dynasty in China, black tea was discovered when tea leaves were left out in the sun, allowing for a long oxidation period. Having a longer oxidation period creates a darker leaf and a dark brown-red tea when brewed. Black tea became popular with Europeans, who preferred to import it over green because the leaves had a longer shelf life. 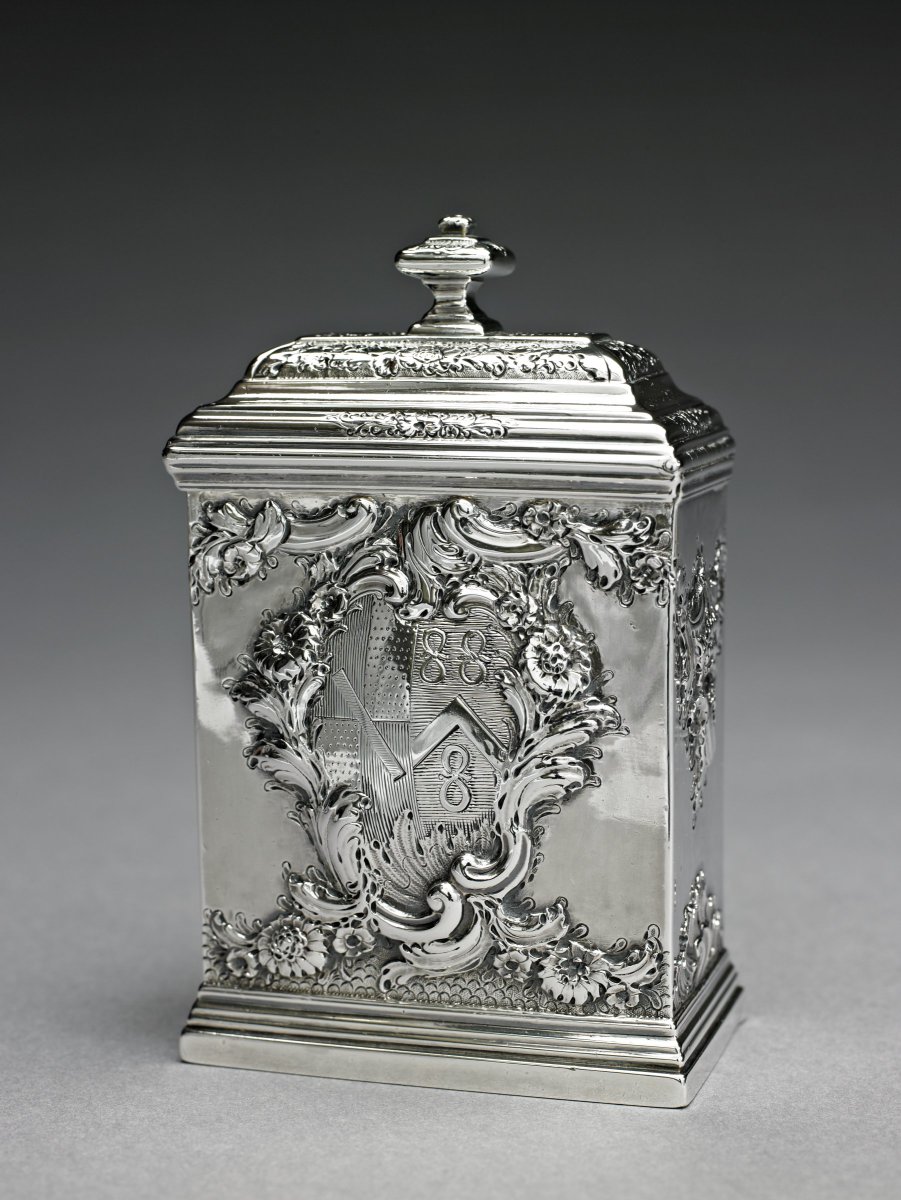 In the 18th century, tea was either black or green – taken with milk or cream – and was stored in small canisters that were usually kept under lock and key by the mistress of the house. Tea was a luxury commodity that was highly prized and would never be wasted, as a pound of tea generally cost more than a common laborer’s monthly wage. Paul de Lamerie was one of London’s foremost silversmiths and his elaborate, French-inspired Rococo style could be found in England’s finest homes. 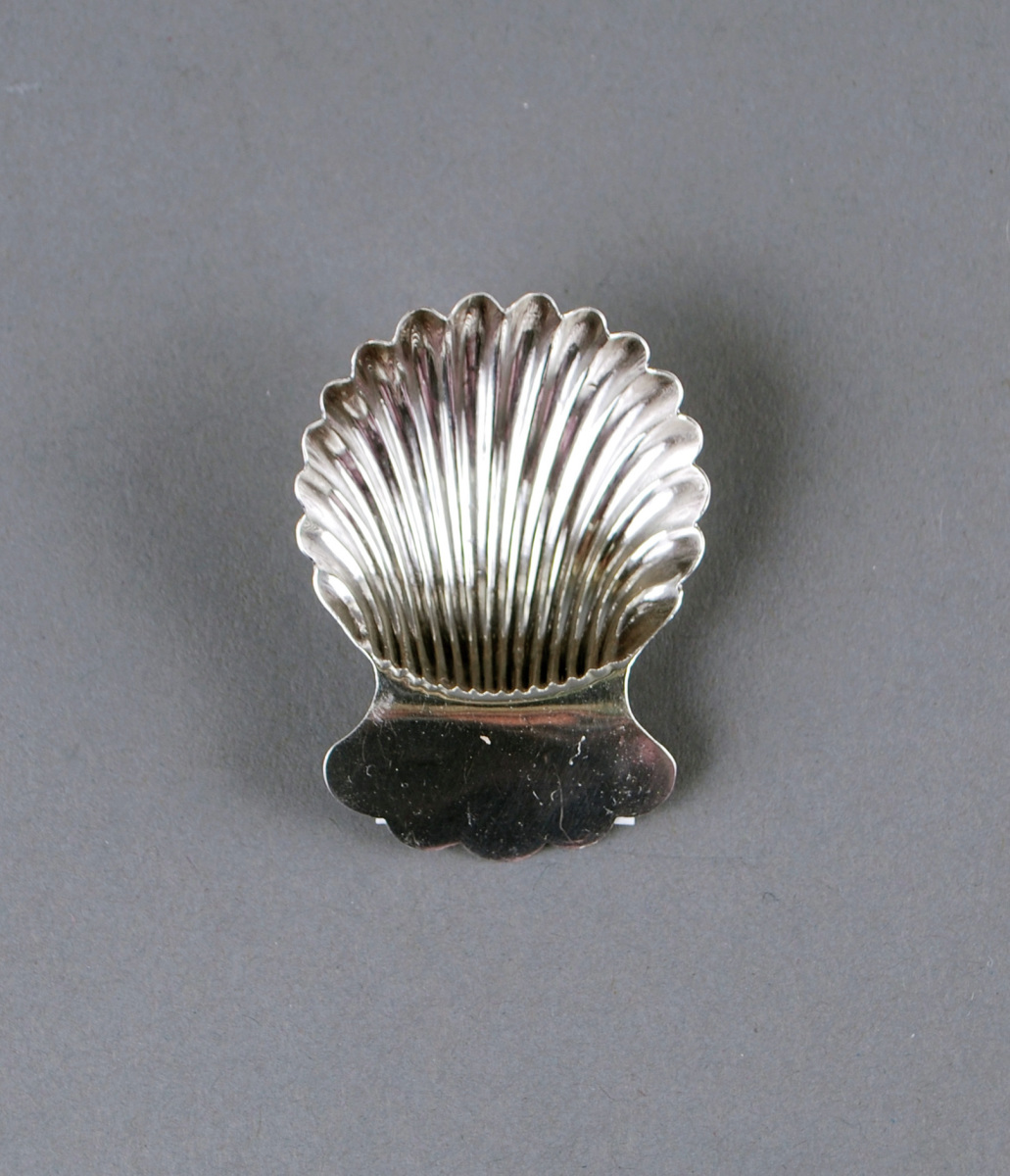 Hester Bateman and her family of silversmiths were prolific producers of silver tablewares during the late 18th century. One of the few female silversmiths of her day, Hester ran a large workshop that created distinctive wares in the popular Neoclassical style. A tea caddy is a box that holds one or two tea canisters, often together with a container for sugar. A tea caddy spoon was used to scoop out the dry tea leaves and deposit them in the teapot. 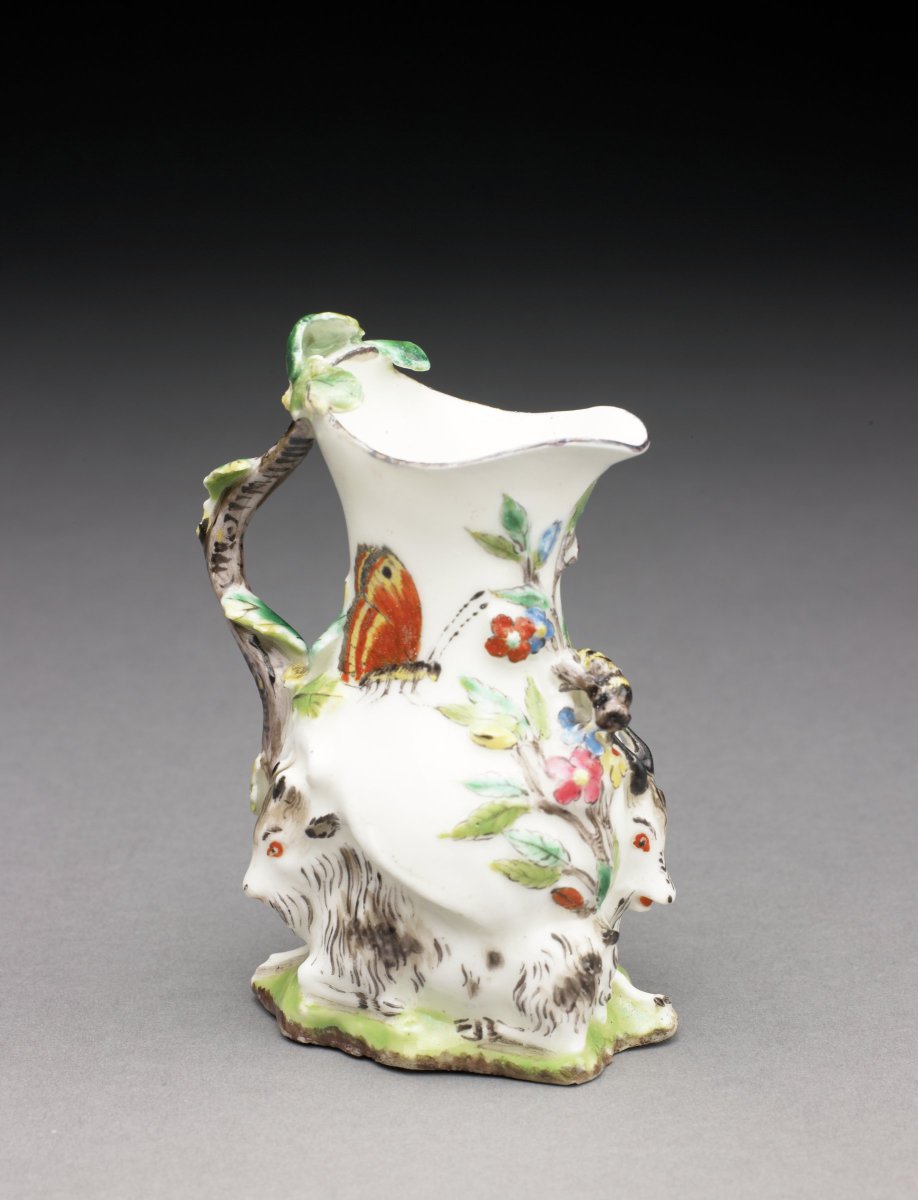 This so-called “Goat and Bee” jug is named for the two recumbent goats that form its base and the large, colorful bee that adorns its side. Probably modeled by Nicholas Sprimont, proprietor of the Chelsea manufactory, and based on a silver prototype, this small, delicate jug would have been used at tea to hold the splash of cream that every good hostess offered her guests. 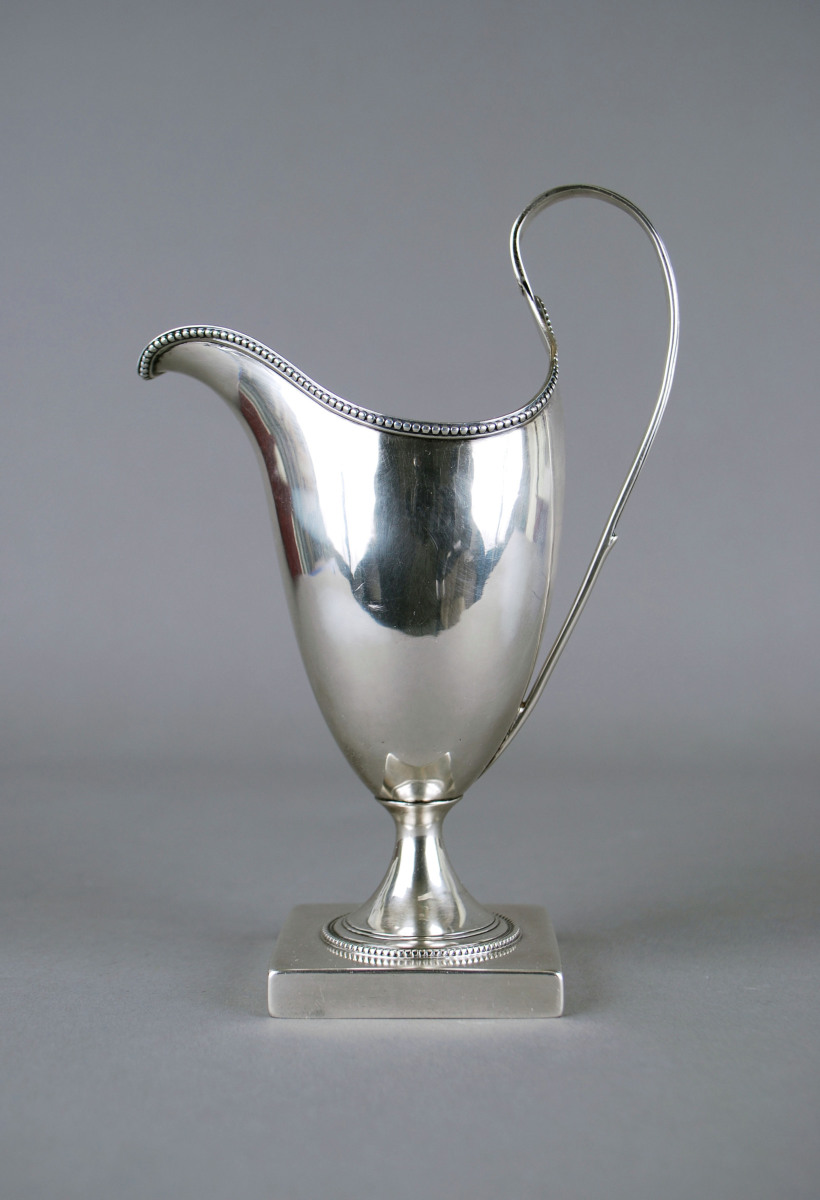 Typical of Hester Bateman’s Neoclassical style, this helmet-shaped creamer with delicate beading around the edges would have been appropriate for an elegant tea table. During the period, consumers were less concerned with having matching sets of teawares, and pieces made of different materials and by different manufacturers were combined to create beautiful and functional services.

The Importation of Tea into Europe and England

Tea was first imported into Europe in 1610 by the Dutch East India Trading Company, but was relatively unknown in England until the mid-1600s. In 1662, Catherine of Braganza married King Charles II of England. She was familiar with the hot beverage and enjoyed drinking tea while living in Portugal prior to her marriage. She brought the custom to England, which caused a flurry of interest in tea among the court and aristocracy. Having Catherine on the throne sparked a desire among the English to emulate her by enjoying the same beverage that she did. 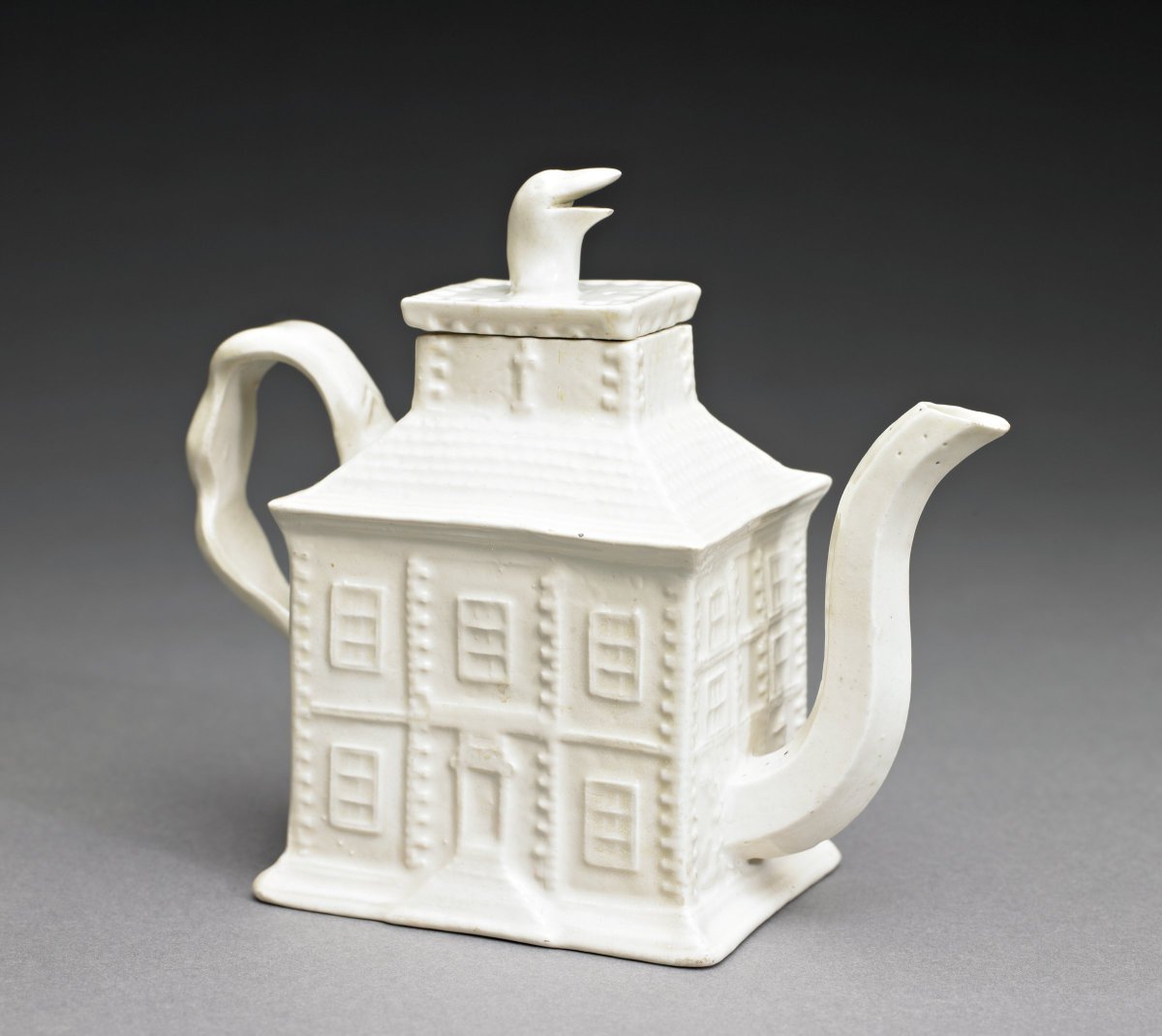 The process of making salt-glazed stoneware dates to the 17th century. Created by introducing common salt into the kiln during firing, it reacts with the clay body to create a thin, clear, slightly glossy surface on the object. Tea drinking in the 18th century required the production of new accoutrements with which to serve and drink it. Many whimsical shapes were created during this period of intense consumption. 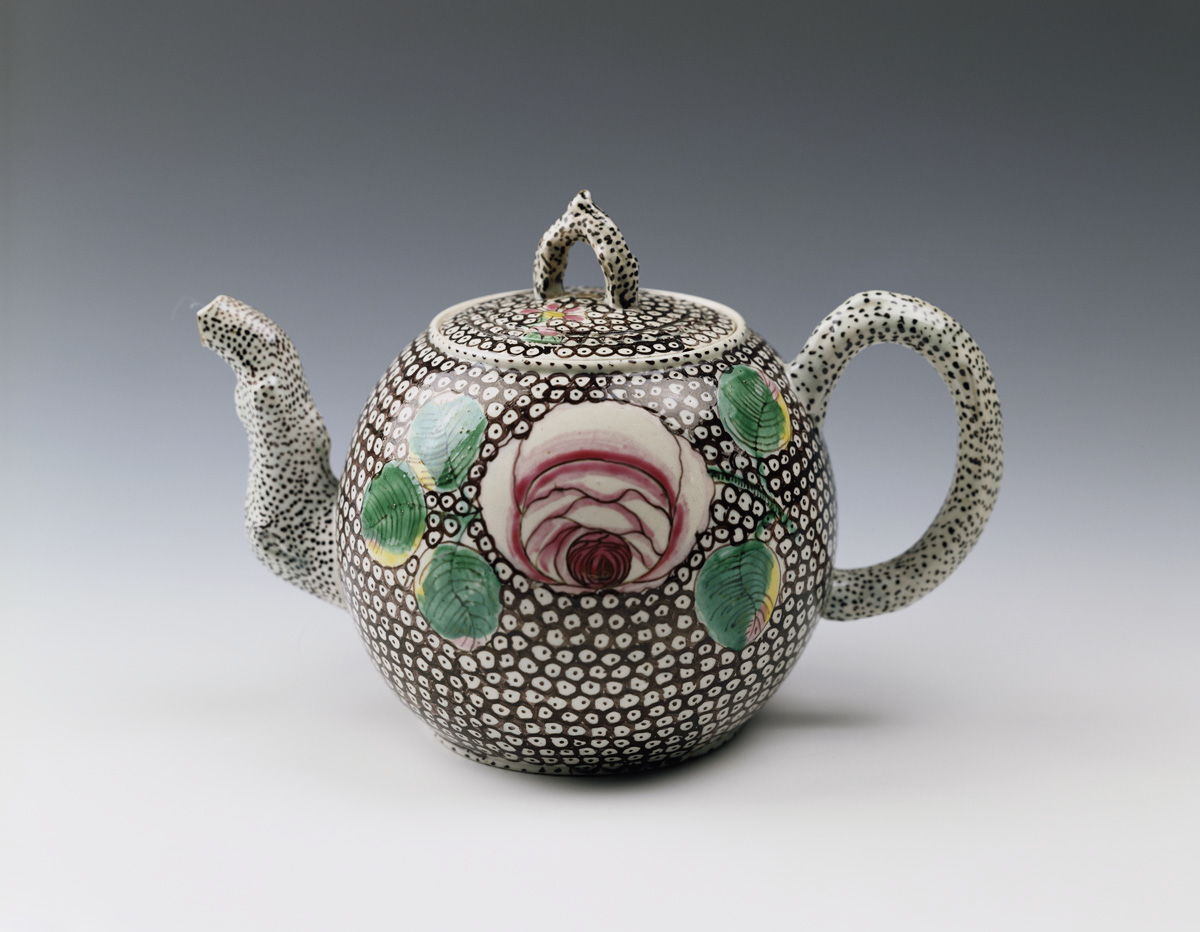 In the 18th century, the brewing of tea was done in small pots which contained a sufficient amount of tea to steep a strong brew. The competition between the Dutch East India Trading Company and the British East India Company created a tea buyers market once the British company decided to lower prices. This price drop allowed for the English middle class to embrace the custom of drinking tea. Teapots were created for the now larger market and designs on teapots expanded. There were floral designs, Chinoiserie designs, and many others, allowing people to find a teapot that best suited their price point and style. 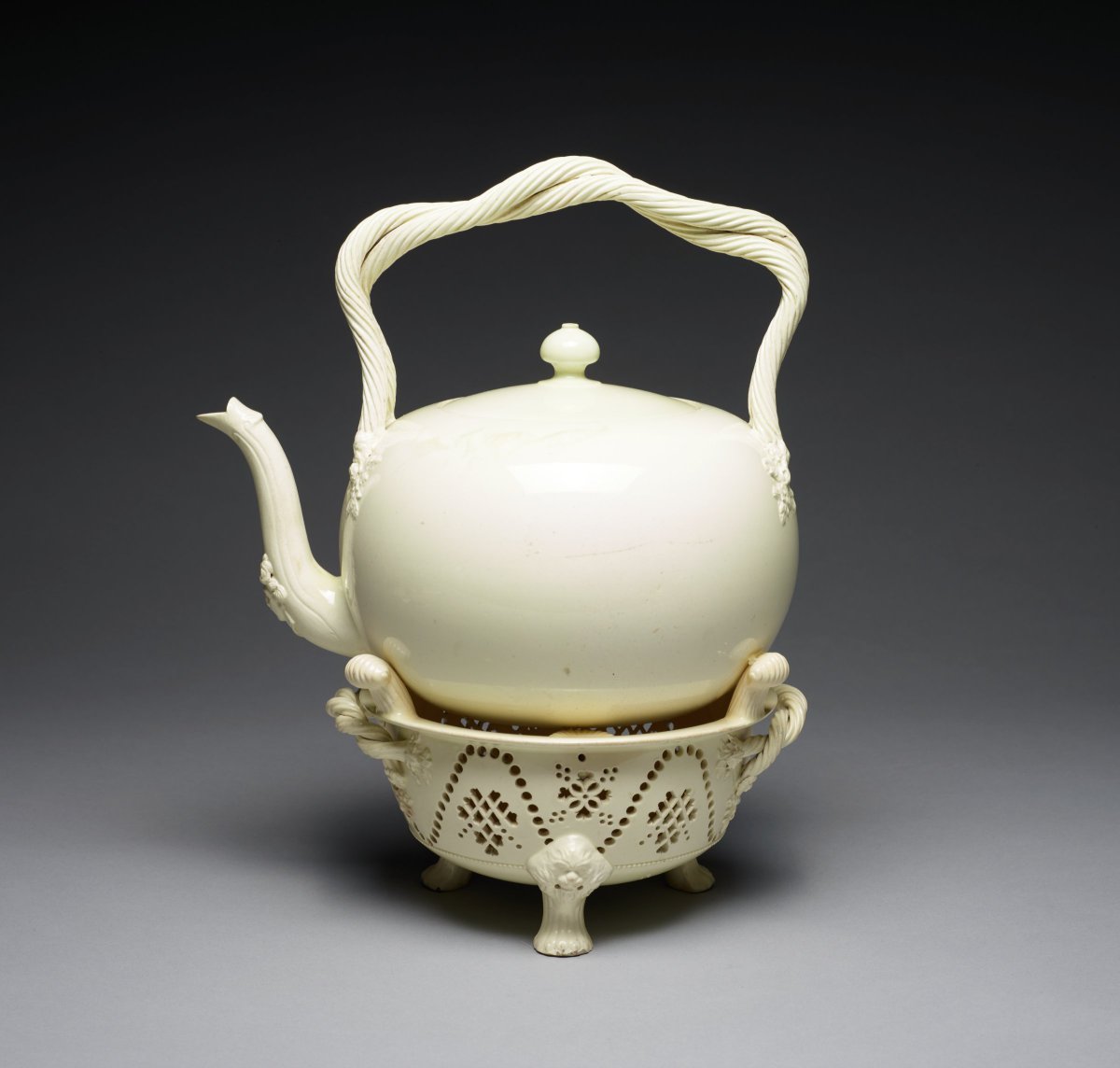 Hot water kettles were an integral part of the tea table. They often came with stands that held small candles with which to keep the water hot. When the cups needed warming up or rinsing, or the strong tea in the pot needed diluting, water from the kettle was used. 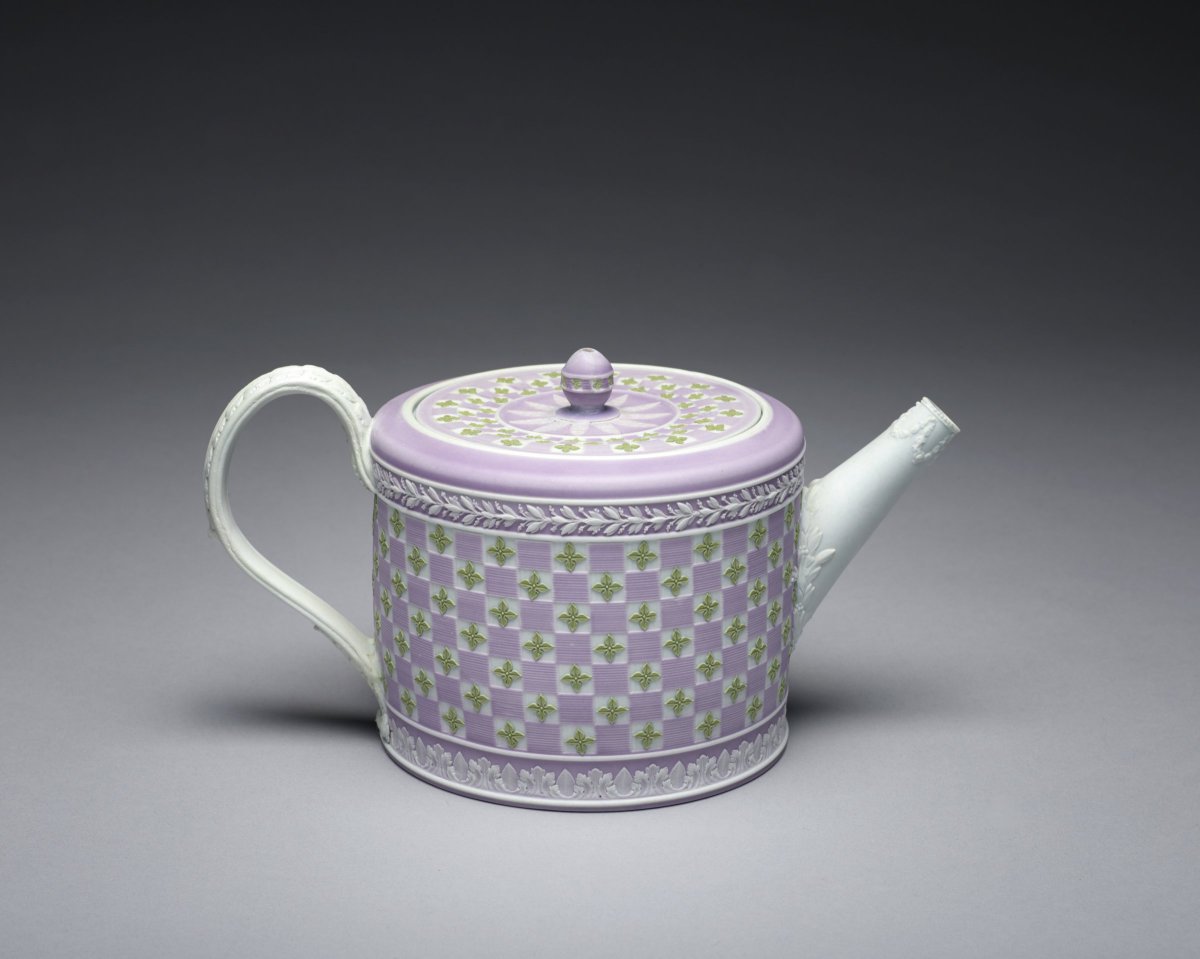 Josiah Wedgwood’s greatest contribution to the ceramics industry, jasperware was created during the early 1770s in response to Wedgwood’s desire to create a lighter clay body that could be colored using metal oxides. This teapot was made using three different colors of jasper. The checkerboard design was made by turning the teapot on a lathe. The green floral elements were applied by hand. Jasper was used primarily for decorative objects, although teawares were also made.

Tea and the Global Economy

Tea remained popular in England due to sugar. When sugar was added, the originally bitter drink became sweet and truly enjoyable, not just an expected part of a cultured lifestyle. With the increase in tea drinking, there was likewise an increase in sugar production. To increase the export of sugar to Europe, Europeans enslaved people from African countries and transplanted them to the Americas to work on sugar plantations in the Caribbean. Sugar grown there was shipped to Europe as part of the “ triangular trade,” so named because of the points of import and export on the shores of the Atlantic Ocean.

The quick and vast production of sugar and other products relied on maintaining the system of slavery. The trading companies became rich because of the increase in goods that they could ship to Europe. They purchased these goods at cheap prices and sold them to Europeans at higher prices. Although Europeans were paying more, the trading companies were making even larger profits that they put back into the economy. In this way, European, including British, empires were built. 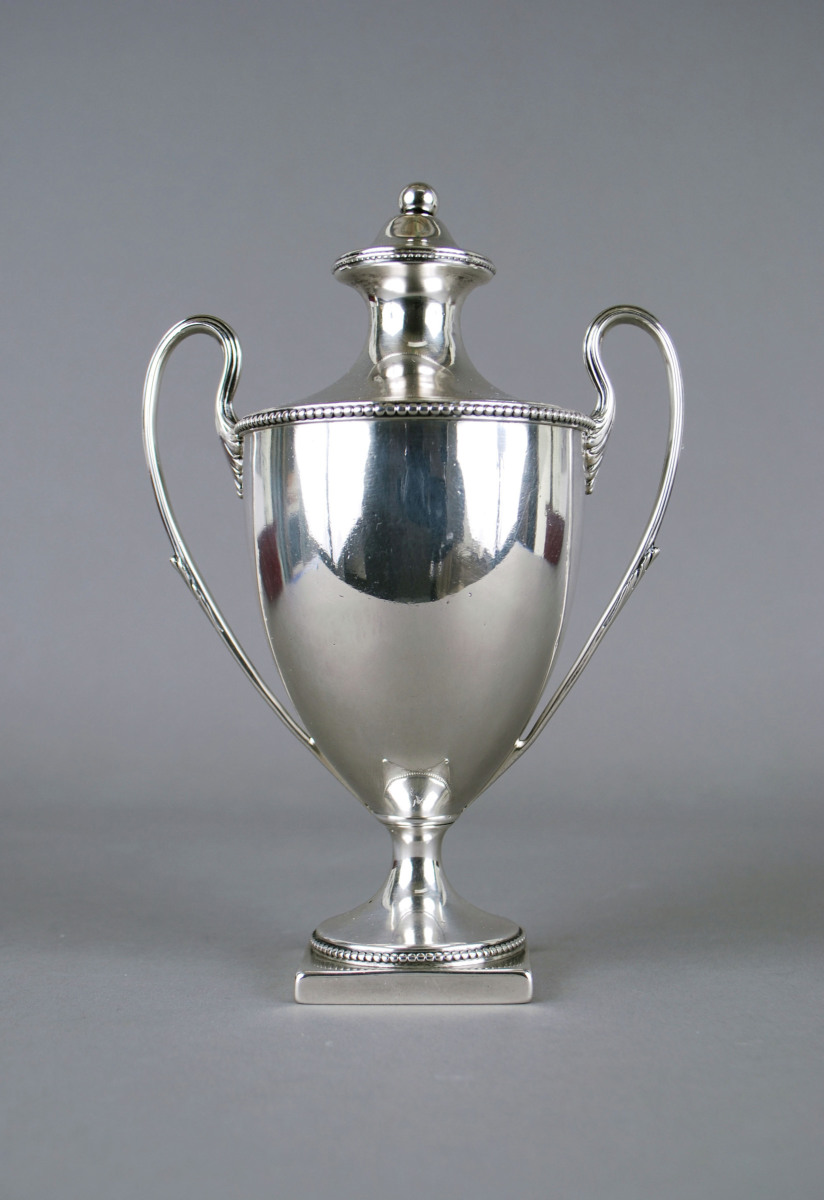 Sugar was not the only export from the Americas. Silver was mined in Mexico and shipped around the world. Much of the silver that came to England was then sent on to China to pay for tea. When that trade proved too expensive for the British, they turned to trading opium for tea. Opium was cultivated in India, a British colony during the period. Although this object was created by English silversmiths for the English market, it reminds us how deeply connected it is to globalized trade and the rise of European empires. 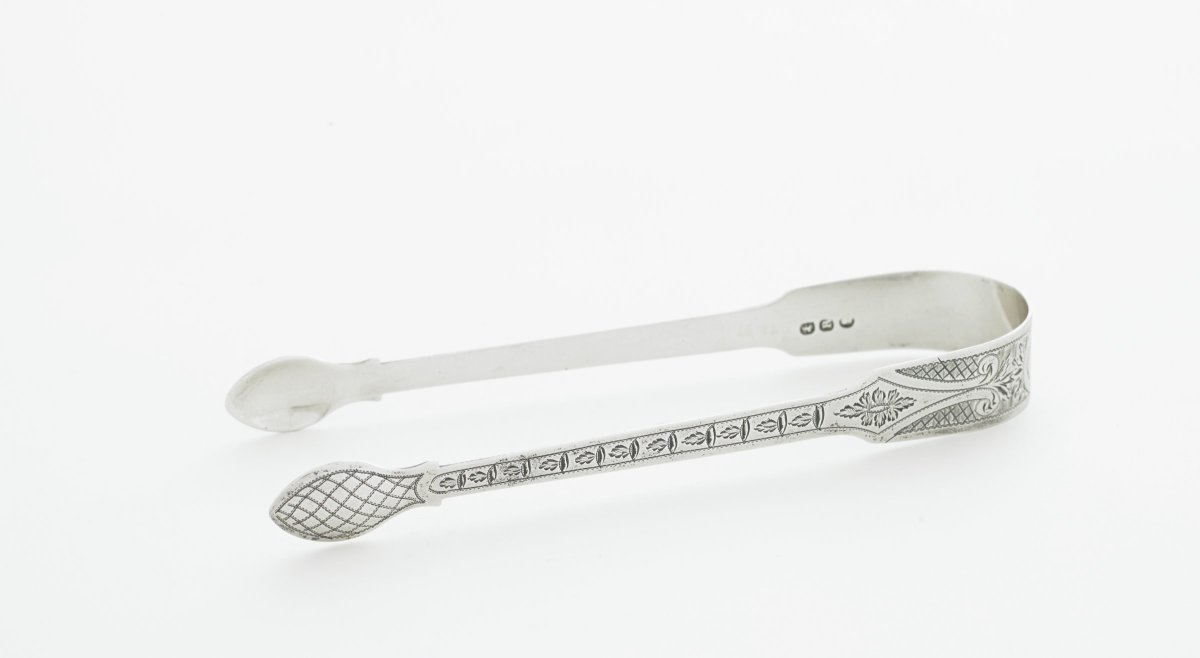 In the 18th century, refined sugar was sold in tall, cone-shaped loaves, rather than in the form of fine granules like those we are familiar with today. These loaves would be broken up into pieces small enough to fit into a sugar bowl with a tool called a sugar nip. Sugar tongs were needed to pick up the small pieces and place them in the teapot or cup.