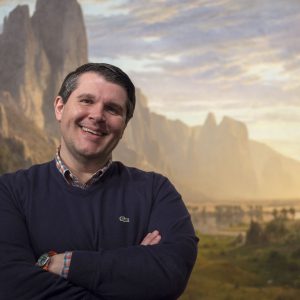 The Board of Trustees of the Birmingham Museum of Art has appointed Dr. Graham C. Boettcher as its new R. Hugh Daniel Director. After a six-month national search, Boettcher replaces Gail C. Andrews, who announced plans for her retirement in March after 21 years of leadership.

“Over the course of the interview process and indeed over the last decade of his service to the Birmingham Museum of Art, Graham has proven himself as a distinguished scholar of art history, a dedicated steward of our collection, and a highly-regarded community leader who is committed to realizing the mission and vision of our prized institution,” says James K. Outland, Chairman of the Board of Trustees. “Graham has created new avenues for accessing art, from both a visitorship perspective and financial standpoint. We look forward to the possibilities his leadership will provide in elevating the Birmingham Museum of Art to even greater heights, as he builds on Gail Andrews’ incredible legacy.”

Following Gail Andrews’ retirement announcement, the Board of Trustees assembled a group of key stakeholders to form a Director’s Search Committee. The committee enlisted the help of global executive search firm Russell Reynolds Associates to conduct a national search. The comprehensive, months-long search yielded a large number of qualified candidates, and the committee ultimately narrowed the pool to two individuals for final interviews. Upon completion of the interview process, the Director’s Search Committee unanimously agreed upon one individual as the most qualified candidate for the position and made a recommendation to the Board of Trustees. The Board of Trustees then voted on, approved the recommendation, and appointed Boettcher as the seventh R. Hugh Daniel Director of the Birmingham Museum of Art.

“I’m thrilled to serve as the BMA’s next director and lead the institution in the coming years, especially as we explore new and dynamic ways to engage and serve the public,” says Boettcher. “I am grateful to the Board for extending to me this opportunity, to my predecessor Gail Andrews for her exemplary dedication to the museum, and to the BMA’s exceptionally talented staff for continuously striving for the highest standards of excellence.”

Graham C. Boettcher was born and raised in Bellingham, Washington. He received a B.A. and Ph.D. from Yale University, and an M.A. from the University of Washington. Boettcher was previously a curatorial fellow at the Yale University Art Gallery, and held research fellowships at the Amon Carter Museum of American Art, and the Terra Foundation Summer Residency in Giverny, France. He joined the Birmingham Museum in Art in 2006, as the Henry Luce Foundation Curatorial Fellow in American Art. Upon completion of his fellowship in 2008, Boettcher was hired in the newly created position of Curator of American Art, which was endowed that same year. After six years as the William Cary Hulsey Curator of American Art, Boettcher rose to Chief Curator and, in February 2016, he was promoted to The James Milton and Sallie R. Johnson Deputy Director.

Among the many diverse exhibitions Boettcher has curated are A Masterpiece in Our Midst: Robert S. Duncanson’s A Dream of Italy (2010), Norman Rockwell’s America (2012), and The Look of Love: Eye Miniatures from the Skier Collection (2012), for which he edited and contributed to a major publication by the same name. He has also contributed to other various publications including American Sublime: Landscape Painting in the United States, 1820-1880 (Tate Britain, 2002); Art and Emancipation in Jamaica: Isaac Mendes Belisario and His Worlds (Yale Center for British Art, 2007); Life, Liberty and the Pursuit of Happiness: American Art from the Yale University Art Gallery (Yale University Art Gallery, 2008). Boettcher was a 2014 Fellow at the Center for Curatorial Leadership, and has been a trustee of the Association of Art Museum Curators since 2010, currently serving as its Vice President of Finance. He has lectured extensively on American art throughout the country and internationally.

Boettcher will assume his new role on September 20, and Andrews will stay on until October 6 to facilitate the transition.