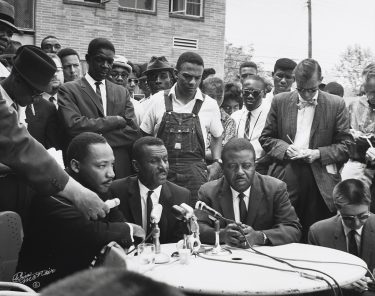 The Birmingham Museum of Art proudly honors the life and legacy of the Rev. Dr. Martin Luther King, Jr. with this selection of photos from our collection, documenting his extraordinary life and work.

The Museum itself has directly benefited from Dr. King’s struggle for equality. Founded in 1951 as a department of the City of Birmingham, the Museum was subject to the Jim Crow laws that variously established “separate but equal” accommodations for blacks or excluded them entirely. During the 1950s and early 1960s, African Americans were only allowed to visit the Museum on Tuesdays or “Negro day.”

In his “Letter from the Birmingham Jail,” King argued that people have a moral responsibility to break unjust laws. If acts of nonviolent resistance occurred at the Museum, those stories have not yet come to light. Elsewhere in the city, however, the courageous acts of Dr. King, the Rev. Fred Shuttlesworth, and their followers helped to bring an end to the racist laws that denied blacks equal access to the city’s business establishments and cultural institutions, including the Birmingham Museum of Art.