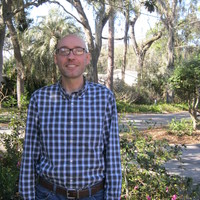 Benjamin Hebblethwaite, Ph.D., Associate Professor at the University of Florida

This lecture will discuss Haitian Vodou ceremonies that are dedicated to spirits, called loa. Songs, drumming, and sacred objects such as flags, rattles, and drums are used in the salutation of the spirits. This presentation includes field photographs, music, and audiovisual documentation to help place this great and noble religious tradition in context.

Benjamin Hebblethwaite has a Ph.D. in French Linguistics from Indiana University (2007) and he works as an Associate Professor at the University of Florida. He is the author of Vodou Songs in Haitian Creole and English (Temple University Press) and Yon sezon matchyavèl/Une saison en enfer (L’Harmattan), with Jacques Pierre. He has published articles on Haitian Creole historical linguistics, language policy in Haiti, Haitian Creole literacy, bilingualism among Haitian Americans in Miami, and comparative religion. He is currently working on the National Endowment for the Humanities-funded “The Archive of Haitian Religion and Culture” (The Vodou Archive) and a book project on Arabic and Islamic influences in contemporary French, German and Dutch cultures.