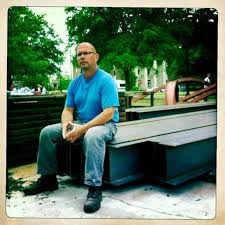 Artist Craig Wedderspoon, Associate Professor of Sculpture at the University of Alabama, will give an overview of his exhibition Quilted Vessel. The exhibition, on view in our sculpture garden, examines the notion of form existing in biotic nature, enlarged to create inhabitable architectural space on a human scale. The building process is motivated by patterns and textures originally found in textiles, with particular influence coming from both traditional and contemporary quilts. The exhibition features new works created over the last year, made especially for the Museum.

Wedderspoon began his work in the tangible manipulation and composition of space and three-dimensional thought in 1985 in Miami, Florida, where he was trained as a glass and crystal carver. Returning to school to study sculpture, he completed his undergraduate studies at Florida International University with a B.F.A. in 1997, and then finished his graduate studies, earning an M.F.A. in 1999, at Virginia Commonwealth University. Wedderspoon joined the University of Alabama Department of Art and Art History in the fall of 1999, where he teaches all levels of graduate and undergraduate sculpture and three-dimensional design. While at UA, he has received several research grants and awards for outstanding commitment to students and teaching. His sculpture has been exhibited extensively both nationally and internationally. Along with multiple solo and group exhibitions, Wedderspoon has completed many permanent outdoor commissions for sculpture in Alabama, Florida, Virginia, North Carolina, and Ohio.