The Supreme Court of the United States ruled that racial segregation of public schools was unconstitutional when it decided Brown v. Board of Education in May of 1954.  This decision was a turning point in the fight for civil rights.  In increasing numbers, black Americans began to seek admission to the schools of their choice.  When students were denied admission to Montgomery’s William R. Harrison Elementary School in September of 1954, a press photograph of the students being turned away by the school’s white principal ran in newspapers from Alabama to Michigan.  Images like these invigorated advocates for equality, even as they stirred some white southerners to oppose desegregation. 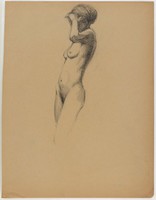