Arthur Bowen Davies was one of the most influential figures in the New York art world in the early twentieth century. First trained as an architectural draughtsman in Chicago, Davies moved to New York, where he studied drawing and painting, and became an illustrator for Century magazine. Davies later devoted himself entirely to painting and became known for depicting nude figures in Arcadian settings. Although Davies was a Symbolist–deriving his mystical subjects from classical mythology–he was included among The Eight social realist painters, led by Robert Henri, who exhibited at Macbeth Galleries in 1908. Davies was the driving force behind the landmark 1913 Armory Show, which introduced America to the art of the European avant-garde.

Davies never visited Asia, but like many urban Americans, was exposed to The Orient through popular spectacles, including circuses, plays, musicals, and magic shows. This work may depict one of the Chinese vaudeville acts that played the New York stages at the beginning of the twentieth century. 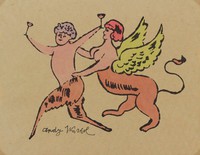