The Portuguese first arrived in Japan in 1543 in the southern island of Kyushu. The Japanese found their strange appearance and habits fascinating. Many folding screens were painted of them parading through the towns with their ships in the harbor. There was a short revival of this subject matter in the early 20th century. The long attenuated figures and sweeping curved lines coincided well with the Art Deco style. 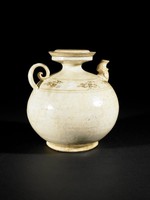 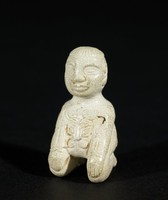