Lacquer is a sealant derived from the sap of the lacquer tree (Rhus vernicifera) that grows throughout Asia. Like varnish it is an irritant in its unrefined state. Used for everyday and ceremonial pieces, lacquer not only enhances the appearance of an object, but also gives it added strength and makes it waterproof. The covering of vessels with lacquer originated in the pre-history of China.

The manufacture of the best lacquer can require as much as ten years, with the number of layers of lacquer on some pieces numbering several hundred. Lacquer can be applied directly to the body of an object or, more commonly, to an intermediary layer of cloth. It can also be colored while still in its liquid state by the addition of cinnabar, cassia juice, or other colorants. The final piece may have hundreds of layers of lacquer that must dry completely between coats. Carving, incising, or inlaying with mother-of-pearl and precious stones and metals is then sometimes used to decorate the piece.

The parrot is a symbol of fidelity to the Chinese. Because of its ability to mimic human speech, it was thought to be the perfect companion for a woman whose husband was away, informing him of her activities during his absence. The peony is also regarded as an emblem of female virtue. In full bloom it is a token of love, affection and feminine beauty. 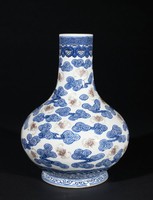