John Neagle spent the majority of his life in Philadelphia and was one of the better known portrait painters in that city. Neagle became the protégé of Thomas Sully and in 1825 married Sully’s niece and stepdaughter, Mary Chester Sully. Neagle’s portraits have a freshness as well as a light and delicate palette which give them an immediacy and directness. George Herman Robinett (1828-1872) was approximately four years old when this portrait was painted. His costume is typical of the manner in which many young boys were dressed at the time. Robinett grew up to become a successful Philadelphia physician. 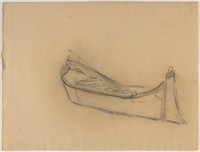