In some parts of rural Alabama, potters made ceramic grave markers as a matter of necessity. Some cash-poor community members could not afford more elaborate monuments, and deposits of stone suitable for carving did not exist locally.

This marker commemorates Bud B. Body, an African-American horse farmer who lived in Sprott, Alabama, with his wife Ada and their many children. Ham, a potter known for his cylindrical grave markers, once lived near Body. Though he had moved to Tuscaloosa County by the time Body died, he probably made this memorial for his former neighbor. Body’s farm eventually became part of the Talladega National Forest; in danger of being destroyed by logging activity, this marker was removed with permission prior to its acquisition by the Museum. 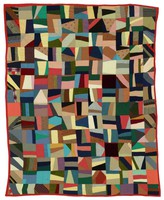