This coverlet was woven in the Federal City pattern, a uniquely American design.  As a 1914 book on coverlets explains, “Federal City…was an attempt to represent the squares and avenues of the national capital.” The maker of this coverlet, Della Endsley (later James), was born on a farm near Trafford, Alabama, in 1878, and moved to Oneonta in the early 1890s. A family document records that all the girls in the Endsley family “learned to shear sheep, card wool, spin threads, dye it and weave on the looms of the day.” In this patriotic color scheme, the white derives from the natural color of the fiber, the blue was obtained by using indigo dye, and the red might have come from a dye made from madder (a flowering plant in the coffee family) or cochineal (a tropical insect). It is rare for a coverlet of this age to survive in such excellent condition. According to the family, it was never used and always stored in a cedar chest. 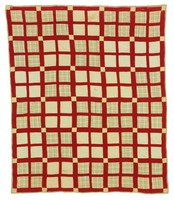 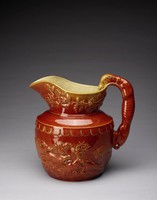 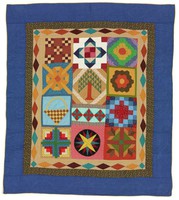 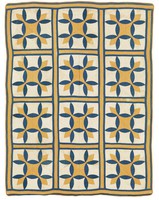