This fur-trimmed velvet coat, worn by Winifred Mary Gilb (1897-1989) of Birmingham, is typical of the winter outerwear worn in the United States during the late nineteenth and early twentieth centuries. According to Miss Gilb, it was made by a local dressmaker who visited her family’s home. Such apparel can be seen in numerous popular images of the period by the illustrators Charles Dana Gibson and Howard Chandler Christy, among others. One 1906 postcard depicts a captivating young woman in a similar coat surrounded by a snowy landscape with the double-meaning caption “Winter Beauty.” 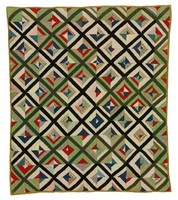