Born in Skaneateles, New York, De Cost Smith was fascinated by Native American cultures from an early age. He regularly visited the nearby Onondaga Reservation and was eventually initiated into the tribe. In 1884, Smith made his first of many trips out West, traveling to the Dakota Territory, where he visited the Great Sioux Reservation.

The plight of the Sioux people—who were gradually stripped of their native lands by the U.S. Government—became a frequent subject of Smith’s work, including this painting, which was included in the art exhibition at the 1893 World’s Columbian Exposition in Chicago. In an account entitled The Book of the Fair, Hubert Howe Bancroft describes the works on display in the Fine Arts Building, writing, “Military subjects are but slightly represented. One of the smallest and best among them is Driven Back, by De Cost Smith, whose time has been largely devoted to the study of Indian life. It represents a party of Sioux warriors emerging from a river by which they are separated from a pursuing squadron of cavalry.” 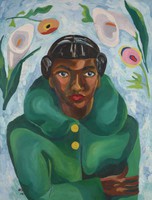