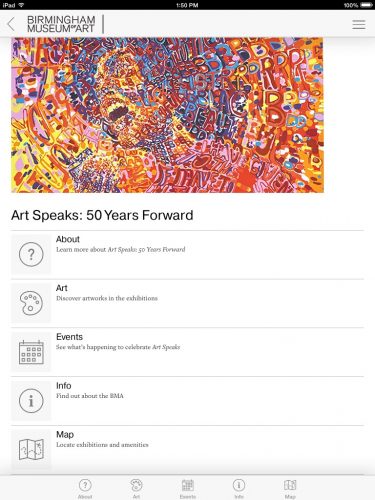 In August 2013, the Museum debuted its second mobile app, which engaged with a series of exhibitions commemorating the Civil Rights Movement.

The Art Speaks app was designed to enhance the experience of onsite and offsite visitors with original content, including contributions by scholars, collectors, community members, and the artists themselves. The app offered images, text, audio and video clips, links to web resources, and other related exhibition and event information.

In 2013, Birmingham hosted a citywide Civil Rights Movement commemoration, marked by the 50th anniversary of the 16th Street Baptist Church bombing, which took the lives of four little girls. The Museum’s series Art Speaks: 50 Years Forward dealt with the history of the movement, specific events, and the continued struggle for human rights.

Etched in Collective History (August 18-November 17, 2013) presented the work of artists who interrogate, depict, and memorialize the Civil Rights Movement. In addition to an introduction by curator Dr. Jeffreen Hayes, the app provided exclusive interviews with contemporary artists Emma Amos, Whitfield Lovell, Radcliffe Bailey, Jefferson Pinder, and Shinique Smith, among others, whose artworks deal with the legacy of the movement.

For The Birmingham Project (September 8-December 2, 2013), acclaimed photographer Dawoud Bey commemorated the four young girls and two boys whose lives were lost in the 1963 bombing of Birmingham’s 16th Street Baptist Church. Bey photographed girls, women, boys and men that represent the ages of the young victims at the time of their deaths, and the ages they would be today. The app provided video commentary on the project from Bey, as well as audio interviews with community members who served as portrait sitters.

Finally, the app included video of the full performance of the Museum’s first commissioned, site-specific performance art piece. Introduced by curator Dr. Jeffreen Hayes, ‘Tis So Sweet Or I Need Sugar Lawd (April 25, 2013) featured Theaster Gates, an ensemble of musicians, and community members who shared stories and reflected on the pivotal themes of the movement and African American heritage.

“The contributions from artists, collectors, and community members made the Art Speaks app truly unique,” said Kristi McMillan, assistant curator of education for visitor engagement. “Some of the artists rarely speak about their art. We also interviewed some of the artist’s subjects, including Dr. Renée Jones-Jeffery, the infant pushed in a carriage in Ernest Withers’s iconic 1961 photograph Daddy, I Want to Be Free Too. These voices breathed life into the artwork, providing insights into the histories of people and objects. Their take on how the art speaks to them likewise encouraged visitors to reflect on the impact and legacy of the Civil Rights Movement.”

“The web-based app allowed visitors to access Art Speaks in a variety of ways,” said Sean Pathasema, new technology initiatives project manager. “For example, visitors to the Museum’s galleries could use a smartphone or tablet, or off-site visitors could pull it up at home on a desktop. This versatile platform gave our visitors not only the widest possible access through the device of their choice but also the most up-to-date information each time they visit any section of the app.”

Visitors without their own devices checked out an iPad from the Museum’s information desk. Complimentary public WiFi is available throughout the Museum and the Ireland Sculpture Garden.