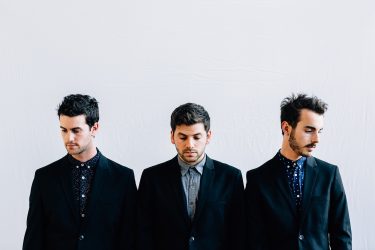 Hailing from neighboring Atlanta, the Shadowboxers are gaining national attention. The trio sings harmonies paired with jazzy-to-folk guitar, bass, and keys, and their compiled talent packs a hypnotizing indie punch. The band will be joining us at the Birmingham Museum of Art for Art on the Rocks on Friday, July 10, and we can’t wait to meet them. We thought we’d share some more about their background, music, and their take on art.

1. Everybody wants to know the band’s story. How did you all meet, and how did you compile musical tastes?

MATT: Adam and I originally became acquainted because I straight up stalked Adam’s shared iTunes library during the first week of college. Not only did I notice that we shared somewhat obscure musical tastes (Gabe Dixon Band and Ryan Shaw, to name a few), but I also saw that he had original music. So our friendship was established over compiled musical tastes. Scott and I met because we cheated off of each other in music theory class that same semester and at some point a year later, I introduced him to Adam. And the world shook.

2. What has surprised you the most about becoming a professional musician/ completing an album with a band?

SCOTT: Maybe the most surprising thing is that it’s not surprising at all. It feels completely natural, and almost obvious, that we would all be in a band together making music for a living. We’ve never considered doing anything else, and hopefully we won’t have to do anything but music.

3. Do you (each of the band members) have a favorite lyric from one of your songs?

ADAM: “I can’t work next to that kind of shirt.” (Referring to a dirty shirt worn by a woman named Dorothy Gray, the subject of a new song)

4. Art On The Rocks is about blending the best of Birmingham culture (music, performances, food, and more) with the beautiful Museum environment. In the spirit of fusing music and art, if the BMA was to curate an exhibition based on your band, which artist(s) would make Shadowboxers art?

ADAM: Probably David Cerny – the guy who made the sculpture in front of the Kafka Museum in Prague, which depicts two grown men peeing various shapes in a fountain. That pretty much encapsulates what we do. Not much else needs to be said. And to be a little serious – it’s artful and appears totally classic, yet its purpose is modern and doesn’t take itself too seriously.

5. In Birmingham, we have a really great food culture. If your music was perfectly paired with a delicious meal and cocktail, what would be on the menu?

MATT: Beans. Lots of beans. A melange of beans, in fact. I mean, we’re talking a full plate here. That’s it. And you’d have to wash ’em all down with an ice cold Brass Monkey.

Click here to buy your tickets to July 10’s Art On The Rocks now, where Shadowboxers will perform live!