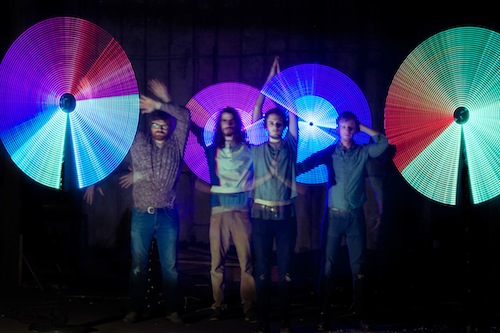 For the first Art On The Rocks of the summer on Friday, June 12, the Museum is excited to welcome Reptar, with a special opening by Breathers. Athens, Ga. has churned out a steady stream of great bands in the last three decades, including Reptar, which includes members Andrew McFarland (drums), Ryan Engelberger (bass) and William Kennedy (analog keyboard). Still, the ability to amuse and arouse their fans is just as important to them as indulging their musical curiosities. This sonic wanderlust extends from African Music to post-punk to psych-pop and converges joyously in songs such as “Blastoff” and “Rainbounce,” and it’s won them high fives from NPR and NME alike.

Check out our recent interview with Reptar, and click here to purchase your tickets to June’s event. Reptar will perform at 10PM.

BMA: Everybody wants to know the band’s story. How did you all meet, and how did you compile musical tastes?

Andrew: William, Ryan, and Graham have all been friends since childhood and played in a band together in high school. I met William at UGA, and we started playing music together and with a couple other bands in Athens. Over Christmas break of 2008-09, William invited me to come jam with Ryan and Graham in Atlanta. We got together for a couple days and decided to have a show in Grandma’s bedroom the day after Christmas. After that, we all moved into a house in Athens in the summer of 2009 and really started focusing on the band. After that summer, we were all still going to school in different places, so over the course of the next year, we would get together on the weekends and practice and play shows.
I think we all have pretty similar musical tastes, but each of us has different interests. For instance, William is really into African music, and Graham is way more into dance music. I think we are able to start on somewhat of a common ground but then reach into these other interests to make the music more exciting for us.

BMA: What has surprised you the most about becoming a professional musician/ completing an album with a band?

Andrew: When we started the band we were really unambitious, hence the name Reptar. That being said, I think we are all still pretty amazed that anyone even likes our band. The same goes for making records; I think we are all just pretty amazed that we get to do what we do and work with the people we get to work with. Ben Allen is incredibly talented, and Andy LeMaster, who we worked with on Lurid Glow, is definitely one of my favorite people I’ve ever met, not to mention one of the best engineers I’ve ever heard or worked with.

BMA: Do you (each of the band members) have a favorite lyric from one of your songs?

Andrew: That’s a really good question. Yes, everyone probably does have a favorite lyric, but I can only speak for myself here. I personally really like the lyrics to a song called “Hard Way,” which is a B-side of Lurid Glow.

BMA: Art On The Rocks is about blending the best of Birmingham culture (music, performances, food, and more) with the beautiful Museum environment. In the spirit of fusing music and art, if the BMA was to curate an exhibition based on your band, which artist(s) would make “Reptar” art?

Andrew: It would honestly probably just to be an exhibition of a lot of our friends’ work. It’s a long list: our friend Addison Adams, who did the covers of both “Oblangle Fizz” and “Body Faucet,” Ross Brubeck, who has done a lot of videos for us, etc. I feel like I can say this because I’m not William, but William has been doing some totally amazing installation work recently that is very similar aesthetically.

BMA: In Birmingham, we have a really great food culture. If your music was perfectly paired with a delicious meal and cocktail, what would be on the menu?

Cocktail: “The Heeby Jeebser”- 1.5 oz green chartreuse, 1.5 oz Electric Blue Mad dog 20/20, 1/2 oz. Orgeat stirred together with ice in a can then strained into a Collins glass, filled with Creature Comforts Athena, and garnished with a Twizzler straw