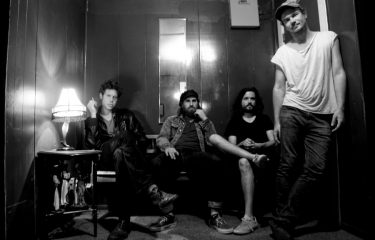 On Friday August 14, the Clear Plastic Masks will roll into Art On The Rocks at the Birmingham Museum of Art. The CPMs will headline the last arts and culture bash of the summer, and, based on their interview responses, they are just as creative and colorful as the event itself. Click here to get your tickets now.

Birmingham Musem of Art: Everybody wants to know the band’s story. How did you all meet, and how did you compile musical tastes?
Clear Plastic Masks: We met in Brooklyn, New York at a $1,000 winner-take-all breakdancing competition that we had all entered. None of us won. As for our musical tastes, we listen to pretty much everything.

BMA: Art On The Rocks is about blending the best of Birmingham culture (music, performances, food, and more) with the beautiful Museum environment. In the spirit of fusing music and art, if the BMA was to curate an exhibition based on your band, which artist(s) would make Clear Plastic Masks’ art?
CPM: Pick out the nearest kindergarten class. Give them some paint and some candy and see what happens. That’s probably closest to our milieu.

BMA: In Birmingham, we have a really great food culture. If your music was perfectly paired with a delicious meal and cocktail, what would be on the menu?
CPM: Tequila/red bull/pop rocks shooter to start; followed by slabs of perfectly prepared ribs, a healthy salad, and some righteous mac and cheese; two bottles of 1945 Château Mouton-Rothschild, six ice cold Presidentes, chilled tap water, and some kind of exquisite small-batch root beer to finish.

Art On The Rocks will be held from 7-11PM on Friday, August 14, and the Clear Plastic Masks will take the stage at 10PM. Check out their tunes on their website, and click here to see our full schedule of events for the evening.