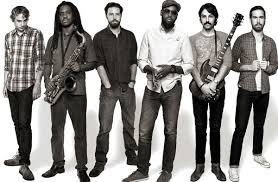 Fresh off the stages of South by Southwest and this weekend’s Bonnaroo festival, Amasa Hines will make their next stop at the Birmingham Museum of Art on June 17 for the first Art On The Rocks of the summer.

Paste Magazine included the Little Rock-based band on its list of 12 Arkansas Bands You Should Listen to Now in 2012, and if their performance is as colorful as the band’s diverse influences, we’re in for a great night at AOTR. Self described as “Psychedelic Afro-Futurism,” their sound is bluesy and soulful, with a little dub and funky indie rock on the side.

Check out our recent interview with Amasa Hines lead singer and guitarist Joshua Asante, and purchase your tickets to June’s event here. Amasa Hines will perform at 10PM.

BMA: Everybody wants to know the band’s story. How did you all meet, and how did you compile musical tastes?

JA: Fate knows all. We initially crossed paths while playing in separate bands locally. From those encounters we ended up playing a weekly residency together. Initially, the sets were fairly loose and and we spent some time getting to know each other personally, as well as our individual aesthetic leanings. The more we played, the more we aligned, and the more our varied tastes distilled into what’s at the core of our sound. We all give and take and try to respect to ebb and flow of collaboration. We’re constantly learning from one another.

BMA: Art On The Rocks is about blending the best of Birmingham culture (music, performances, food, and more) with the beautiful Museum environment. In the spirit of fusing music and art, if the BMA was to curate an exhibition based on your band, which artist(s) would make Amasa Hines art?

JA: It probably would be a multidisciplinary exhibition with the brightest of the world’s wondrous weirdos. We’d have Wangechi Mutu, Kerry James Marshall, Shepard Fairey, and the ghosts of John Biggers, Gordon Parks and Mary Ellen Mark on the visual side. We’d commission Bradford Young and Khalil Joseph to create a short film to install, and Solange would perform with Sun Ra’s Arkestra at the opening reception. We’d get The Arcs in there for the closing night.

BMA: In Birmingham, we have a really great food culture. If your music was perfectly paired with a delicious meal and cocktail, what would be on the menu?

BMA: What can we expect from your show at Art On The Rocks?

JA: Consistency is probably what we strive for the most. That said, we always want to share performances with intensity, dynamics, and space for listeners to find themselves in the music. After all, it’s theirs just as much as it’s ours.