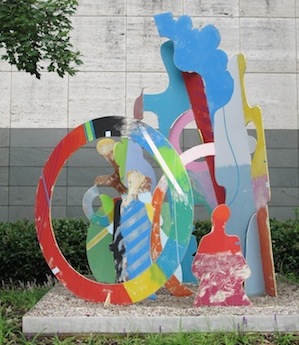 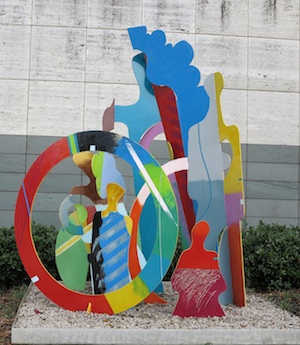 Since its arrival on the grounds of the Museum, John Scott’s Target has enlivened the environment with its bright colors and fanciful shapes. In its position by the auditorium entrance, it naturally attracts viewers; however, the sculpture has faded over the years, due to the ravages of weather, sunlight, and environmental pollution. It became increasingly difficult to maintain because of flaking paint and corrosion.

In August, I conducted tests on the paint layer to see if the colors could be revived, and studied images of the piece in its curatorial file. The paint had been originally applied by students, under the direction of John Scott, and colors were blended on the surface with quick layers of brushstrokes. In some areas, the paint had been applied, followed by incised marks, to remove the top layer of paint and reveal the primer below. Original colors and their position on the sculpture were noted, and a test area was treated. I found that by inpainting the areas of loss, the original blending brushstrokes revealed themselves. For areas that had intense losses, faint traces of paint showed the direction of the brushstrokes on the surface, and it was in these areas that the original images would later help in duplicating the colors.

Treatment began in earnest when student volunteers from Alabama School of Fine Arts removed gravel from the base of the sculpture, so that the base and support could be inspected. Collections Care Specialist Lisa Stewart and I began the process of washing the sculpture, followed by polishing the original painted surface with a mild abrasive. The process removed a thin layer of oxidation, which had caused the appearance of the paint to appear chalky and pale. Areas of corrosion were removed with a pencil-sandblaster, and raw metal was coated with rust reformer to abate further corrosion. The entire sculpture was coated with a removable varnish, which saturated the color further. The varnish acted as an isolation layer, separating the original painted surface from the inpainting that followed, and it adhered flaking areas of paint. The losses were inpainted with light-stable acrylic colors, using images from 1994 as a guide. A second layer of varnish with an ultraviolet light inhibitor was applied.

It was lovely to work outside during the late summer, and many people stopped by to chat and ask about the process. By washing twice yearly, we will be more easily able to maintain and monitor the piece for any changes that may appear. I extend my sincere thanks to staff and volunteers for their assistance. Thanks to everyone’s hard work, Target brightens our entrance once more!