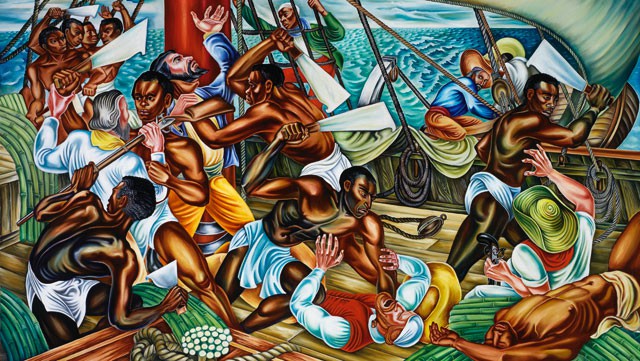 Strikingly large and vibrant murals surround all those who enter the Birmingham Museum of Art’s summer exhibition Rising Up: Hale Woodruff’s Murals at Talladega College. Commissioned by Talladega College in 1938, Hale Woodruff’s famous works depict noteworthy events in the rise of blacks from slavery to freedom, making them the first pieces to portray the Amistad mutiny and trial in the twentieth century. At First Thursday on August 6, a panel of legal experts, including the Honorable Judge Houston Brown, the Honorable Judge Ralph C. Cook, attorney Mason Davis, and civil rights leader Odessa Woolfolk, will gather to discuss the case.

The story begins in February of 1839, when Portuguese slave hunters kidnapped a large group of Africans from Sierra Leone to be traded to Havana, Cuba, a site known for its active slave trade. In Havana, two Spanish planters bought 53 of the kidnapped Africans and enchained them on the Cuban schooner Amistad, which set sail for a Caribbean plantation on June 28. On the fourth night of travel, the Africans broke free, killing the ship’s cook and captain the next morning. They then ordered the planters to sail to Africa so they could return home. To appease the mutineers, the planters began to steer towards Africa during the day but would secretly sail towards the United States at night in hopes of finding reinforcement against the African. In late August, the ship neared the coast of Long Island, New York, where it was seized by the U.S. brig Washington. The Spanish planters were freed, but the Africans were imprisoned in New Haven, Connecticut.

Conflict regarding the captives’ rights arose in the States. President Van Buren advocated sending the Africans back to Cuba, but Northern abolitionists raised enough money to fight for the Africans’ freedom in the U.S. courts. An issue of property rights, which emerged as the planters, Spanish government, and the Washington captain all claimed the Africans as their own, brought the case to trial in the Connecticut’s Federal District Court and later the U.S. Supreme Court. The Court ultimately upheld a previous ruling, which stated that the Africans had been abducted in violation of international trade laws and treaties and therefore could not be legally enslaved.

After the trial, abolitionists in the U.S. aided the freed men in a number of ways. Several worked to provide the Africans with legal help and tutoring in English and Christianity, while a few others traveled with them to Africa to begin a Christian mission. Some united to form the American Missionary Association (AMA), a Christian-based organization that helped to create educational opportunities for former slaves, including Talladega College, which it established after the Civil War.

Interested in learning more about the complexities of the Amistad case? Hear from the panel of legal experts at First Thursday on August 6 at 7PM.