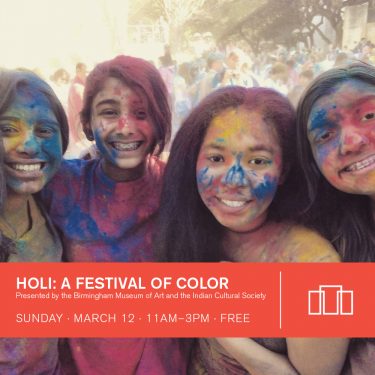 One of the most colorful days of the year is the day of the Holi Festival. Although it is a Hindu holiday that began in India, there are now festivals held all over the world to welcome spring, including right here at the Birmingham Museum of Art!

Join us on Saturday, March 12 as we partner with the Indian Cultural Society to celebrate this annual favorite, now in its sixth year. Until then, here are 5 things to know about Holi:

1. The vibrant colors celebrate the arrival of spring
The festival takes place the day after the last full moon of the Hindu month Phalguna. This typically takes place between late February and early March, and marks the beginning of spring. The bright colors allow both nature and those celebrating to shake off the dark gloom of winter and welcome warmer weather.

2. There are several ways Holi’s story is told
As a religious holiday, it has roots in several different Hindu mythical stories. The most common explanation is found in the story of a king named Hiranyakashipu who was an evil demon. His son Prahlad didn’t worship the king but instead worshipped the god Vishnu. This enraged the king, who ordered his sister Holika to kill Prahlad. Holika was immune to fire so she took the young boy and sat in a bonfire with him in her lap, planning for him to burn up while she remained unharmed. Instead, the god Vishnu protected Prahlad as he prayed, and Holika was burned to ashes. The bright colors as well as the bonfires that take place the night before the festival commemorate this triumph of good over evil.

Alternatively, the background of Holi comes from a tale about the meditative Lord Shiva. Madana, the god of love, decided to test the concentration of the god Shiva by appearing to him as a beautiful nymph. Shiva knew it was Madana, however, and in anger shot fire out of his third eye and burned Madana to a crisp, another basis for the bonfires.

3. The holiday creates a sense of togetherness
In India, the festival is associated with the loosening of social norms, allowing people to celebrate without regard to caste, religion, gender, or social class. The colorful powder and water cover everyone celebrating in color, hiding any distinguishing features. It is a time to forgive wrongdoings and let loose. A common saying heard during this time is bura na mano, Holi hai (“don’t feel offended, it’s Holi”).

4. The origins of the festival also had health benefits
Earlier in Indian history, people believed that the changing seasons and temperatures caused colds and other sicknesses. Throwing medicinal herbs and plants helped ward off illness. Now, the color comes from the traditional gulal powder (primarily made of cornstarch), sold in the streets in India and at festivals around the world. Colored water is also sometimes used to celebrate, as people pour the water or even throw balloons full of it at each other.

5. The festival includes traditional food and drink
While food is not as central to the festivities as the throwing of colors, there are several traditional dishes used to heighten senses and raise spirits. This includes thandai, a sweet, cream milk drink; puran poli, a sweet, buttery flat bread; and dahi vada, a savory snack food.

Click here to learn more about Birmingham’s Holi celebration, and join us at the festival on Saturday, March 12 from 11AM-3PM!