Before our upcoming lecture by Dr. Benjamin Hebblethwaite, we wanted to take a moment to explain a little more about our current exhibition, Haitian Flags from the Cargo Collection. If you haven’t seen the exhibition yet, it is beautiful; more than that, it is filled with a lot of information that you may not know about Haiti, the Vodou religion, and what the flags truly mean.

Here are 5 things to know about Haitian Flags, and don’t miss the free lecture happening on Friday, February 26 at 6PM!

1. Haitian Vodou is different from voodoo
Vodou is a religion that was established in the 1500s when Africans arrived on the island of Haiti, in the Caribbean. It doesn’t aim to harm others or mystically inflict damage; rather, it promotes a relationship between the living followers and divine spirits and ancestors. Voodoo originated in Louisiana and is often referred to as Louisiana or New Orleans voodoo to differentiate the two belief systems.

2. Haitian Vodou flags have a different function than expected
While many people think of flags as something that flies from a flagpole, the Haitian Vodou flags serve a different purpose. The flags, called drapo, are displayed on or near altars. In religious ceremonies, processions carry the flags into sacred spaces, and worshippers may wear them over their shoulders as they are joined together with the loa, or spirits. 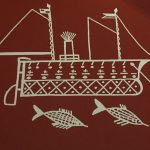 3. Each loa has a vèvè symbol
During religious ceremonies, priests draw symbols, or vèvè, on the ground to invoke spirits, a practice found throughout West and Central Africa. Each loa has a vèvè associated with it. Some have clear connections, such as the ship representing Agoue, the spirit associated with the sea. Others seem more abstract, incorporating symbols that may seem familiar to viewers but have unfamiliar connotations.

4. The flags combine symbolism from Catholicism and the Society of Freemasons
In its beginnings, Vodou was primarily practiced by slaves brought to Haiti from West and Central Africa. It was banned by European Colonial powers, forcing believers to find other ways to worship. Consequently, Catholic symbols and Saints are merged with aspects of the hidden faith, often correlating Catholic saints to similar Vodou loas.  The French brought the Society of Freemasons, a fraternal order developed from ancient and medieval stone mason guilds, to Haiti in the mid-1700s. After gaining independence, Haitians established their own Masonic lodges, leading to the incorporation of Masonic symbols such as skeletons, coffins, and compasses. 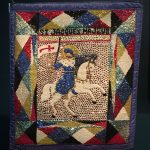 5. One loa has a connection Birmingham’s city symbol, the Vulcan
One of the spirits associated with Vodou is Ogou (also spelled Ogun or Ogoun), represented by Saint Jacques Majeur, or Saint James. In West Africa, Ogun is the spirit of iron. In Haiti, he represents weaponry, war, and fire. This is similar to Vulcan, the Roman god of fire and metalworking. The Vulcan is best known in Birmingham from the statue representing the god, acknowledging the city’s roots in the iron and steel industry.

Now that you’re familiar with Haitian Flags, come in and see it! The exhibition and the upcoming lecture are both free and open to the public.